How To Find And Fix Potential Breaking Points On Your Boat

The fate of your boat's security in a storm comes down to these essential and critical points in your defense strategy. 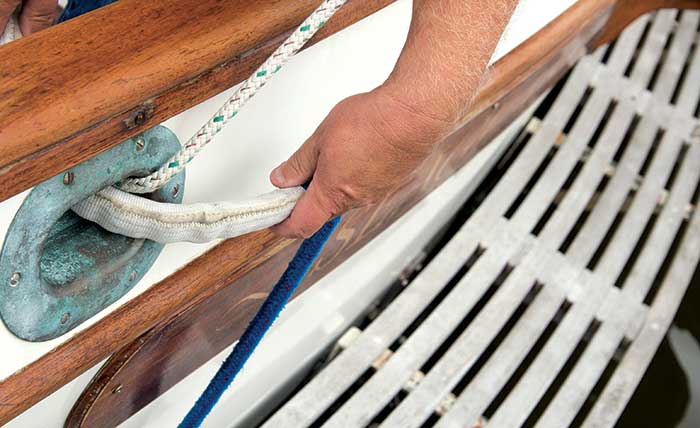 Chafe protection is essential on all lines where they run against chocks, pilings, or the dock itself. (Photo: Stacey Nedrow-Wigmore)

Nylon stretches and absorbs shock, which is good, but this stretching under tremendous loads also works the line against chocks and other contact points. Chafe protectors are essential on all lines — at a dock, mooring, or at anchor. At a dock, lines are liable to abrade against chocks, pilings, and the dock itself. Wise use of proper chafing gear is critical. Commercially available chafing gear such as Chafe-Pro is a good choice.

See our article, 5 Ways To Prevent Line Chafe & Breakage On Your Boat, to learn ways to protect your line from chafe.

On moorings or at anchor, the line stretched over the edge of the rail can create sufficient heat to melt the line internally. Using hose to protect the line during a storm can encourage heat-related failure by not allowing water to cool the nylon fibers. Also, the plastic can melt, causing abrasion to the line.

One solution is to mount the cleats directly at the rail so the line won't be worked against a chock. Another is to use polyester (Dacron) line, which has much less stretch but is far more chafe-resistant than nylon.

By using a polyester line from the cleat through the chock and then joining it with a nylon line (use two eyes) to the piling or mooring, you can get the best of both types of line — the chafe-resistance of polyester and the stretch of nylon.

An alternative is to use polyester sleeves, available at chandleries, to protect the nylon lines from chafe while also allowing water to reach the heated fibers. 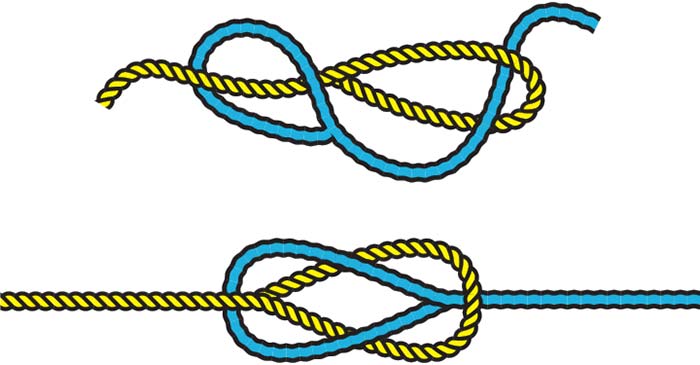 By joining a polyester line from the cleat through the chock to nylon line from the piling or mooring, you can get the best of both types of line — the chafe resistance of polyester and the stretch of nylon. (Illustration: ©Erich Stevens)

Assess the ability of cleats to carry heavy loads. This means making sure all are backed properly with stainless steel or aluminum plates. On sailboats, winches (if backed properly and designed for the job) and even keel-stepped masts can also be used to secure lines at a dock. Note that anchor lines should not be secured to the mast, as it creates that much more stretch on the line at the chock, which further increases the chances of chafe failure.

Don't put too many eggs in one basket by leading numerous lines to a single cleat, even if it's backed properly. Two lines per cleat is usually the maximum. Also, a cleat is not reliable when lines are led perpendicular to the base and the cleat can be wrenched out by the tremendous loads (see diagram below).

Lines led perpendicular from a cleat can wrench the cleat out of the deck. Two-hole cleats are more vulnerable than four-hole cleats.

Strip all loose gear that creates windage: canvas covers, bimini tops, outriggers, antennas, anchors, running rigging, booms, life rings, dinghies, portable davits, and so on. Anything on deck that can't be taken off should be lashed securely.

Unstepping masts on sailboats is strongly advised. If this is impractical, sails (particularly roller-furling headsails) must be removed. Roller-furling headsails create a lot of windage, especially when they come unfurled, which is almost guaranteed to happen no matter how carefully they're secured. All halyards should be run to the masthead and secured with a single line led to the rail. This reduces windage and minimizes flogging damage to the mast. The line can be used to retrieve the halyards.

Fenders and fender boards won't compensate for a poor docking arrangement in a hurricane. When the boat has been well secured, however, they may offer some additional protection. When asked about fender boards, BoatUS CAT Team members said they were effective at preventing "dock rash," but only if heavy boards were used with several large fenders. Using only two fenders at either end of a long board wasn't effective; the fenders were either bounced out or the boards broke in the middle. One example of a system that worked: A member in Punta Gorda said he used several 12- by 32-inch fenders and a 16-foot fender board made from a 2-by-10 at his dock to keep his 50-foot Sea Ray from banging against a piling during a hurricane. The member credits the fender board for helping minimize damage to his boat.

Remove cowl ventilators and seal the openings. Use duct tape to cover instrument gauges. Duct tape should also be used around hatches, ports, lockers, and so on, to prevent water damage below. Note that some types of duct tape leave less gummy residue than others.

Close all but the cockpit drain seacocks and shove a plug into the engine's exhaust ports. If the boat does take on water, it will sit lower, and water could back up into the engine. Remember to remove the plug before starting the engine when the storm has passed.