5 Ways To Prevent Line Chafe & Breakage On Your Boat

A failed line can cost you plenty if the boat breaks free. Here's a handy graphical guide to common issues. 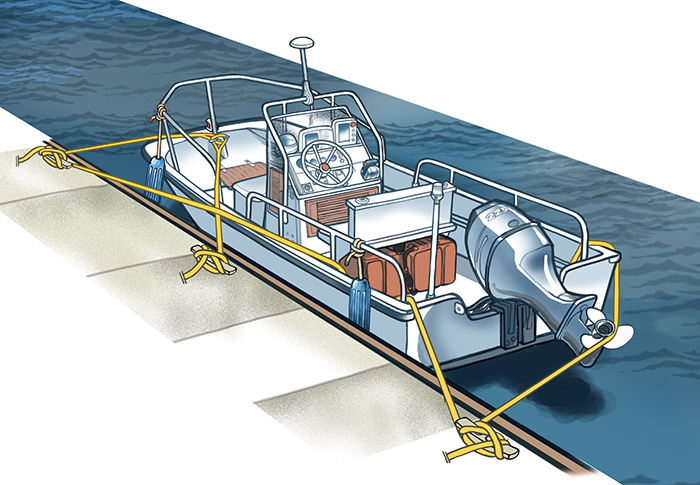 Above is an example of how NOT to tie up your boat. Be aware of potential chafe points when tying your boat up to the dock. Lines across propellers, crossed lines that can rub one another, and lines that are not properly lead through chocks are all potential problems and sources of chafe. | Illustration By: Jan Adkins

Many of us tie up at the dock without a second thought, but those lines are the only thing holding your pride and joy in place. Sun and age will cause lines to eventually fail, but chafe is more insidious and can cause even a new line to fail in a matter of hours if it goes unchecked.

What Is Boat Line Chafe?

Chafe is the term used to describe when two or more parts rub together causing friction or wear. Often times chafe is obvious, like when the action of the boat bobbing up and down at the dock wears a section of line running through a chock or fairlead. The first indications may be some localized fraying and fuzziness to the covering or exposed strands. But over time, if left unchecked, the strands may wear through, which in turn puts more stress on underlying adjacent fibers until these too fail, eventually leading to a total failure of the line.

It is essential that boaters not only recognize the signs of chafe but also are aware of the factors that lead to chafe occurring in the first place. They must also educate themselves on what can be done to reduce undue stress and chafeinduced wear.

Chafe is not only caused by lines rubbing on other objects but can also be caused by two lines rubbing together, such as a couple of spring lines crisscrossed between boat and dock. What owners may less understand is that a single line can be chafed internally. As tension is exerted on a line the yarns rub together and chafe each other. Some manufacturers add dressing to the rope's fibers to help mitigate this friction, but salt crystals and dirt trapped in the line greatly increase the effects of internal friction.

There are literally thousands of scenarios where chafe can occur. The graphic shows but a few typical examples of what to be on the lookout for.

Salt and dirt make lines stiff to handle and lead to premature wear. Clean lines and ropes with a mild detergent, then rinse with clean water at the end of each season to prolong their life and keep them supple.

All Illustrations By: Jan Adkins

1. Fifteen or 20 feet of chain between anchor and line reduces chafe on the nylon rode, especially on rocky bottoms that can abrade lines. However, the nylon rope must clear any obstructions on the bottom. An added benefit is that the weight of the chain assists in getting the anchor to set better. 2. Bow chocks can be a significant source of chafe and quickly wear through lines. Chafe protection significantly extends the line's life. Some proprietary protectors, like the popular Chafe-Pro, attach around the line with hook-and-loop fasteners. 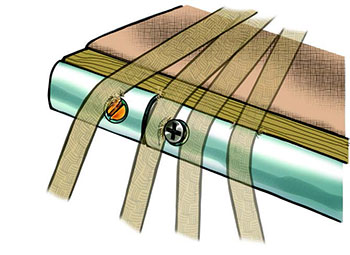 3. Improperly countersunk screws, screw heads with sharp edges, and joins in metal rubrails can be as sharp as a knife and will cut through rope fibers quickly. 4. A concrete or stone jetty or dock can be particularly hard on lines that can wear through in mere hours if the line is allowed to "saw" back and forth on an edge. 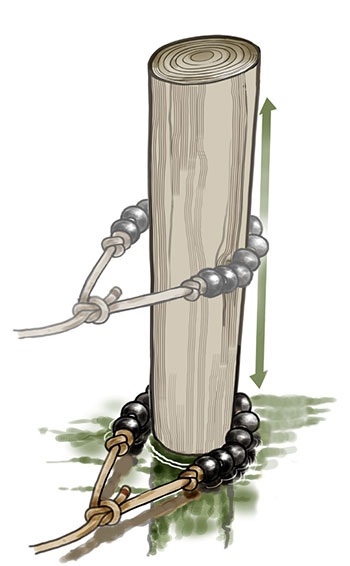 5. If you need to make fast to pilings consider a product like TideMinders, which allows lines to rise and fall with the tide without causing any significant chafe.

Read this article for more  helpful information on chafe protection, especially during storms and hurricanes.