12 Steps to Repacking or Replacing Your Bearings

If you choose to tackle this job yourself, here's a general guideline. 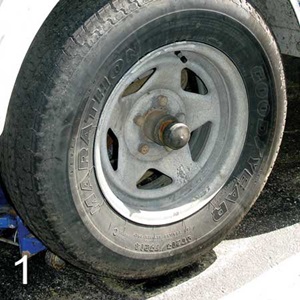 Jack the trailer tire on one side high enough so that the tire spins freely and place a jack stand beneath the frame. Chock the opposite trailer wheel. Some will leave the trailer connected to the tow vehicle to ensure there is no movement. Shake the tire up and down and from side to side. If there is movement, chances are good the bearings are bad. Spin the tire and listen for sounds. In many cases, bad bearings can be heard but be aware this can also be nothing more than brake pads or shoes catching the hub. 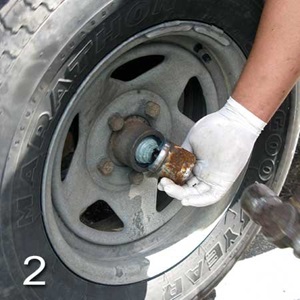 Remove the dust cover or Bearing Buddy with a screwdriver. If the grease is milky, water has entered the bearing assembly. If the grease has a different color, it can mean newer grease was added. Wipe all grease away with a rag or towel. 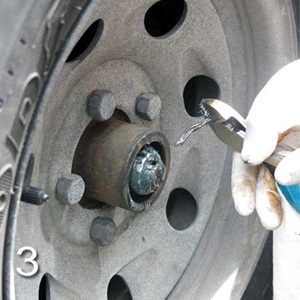 Now remove the cotter pin, castle washer (some trailers have castle-style axle nuts — see diagram — in which case there's no castle washer), axle nut, spindle/axle washer and set aside for safekeeping as you'll be using them again. Shake the tire and the outer bearing should come off. Wipe away bearing grease (look for evidence of metal, which points to a bearing or race failure) and inspect for signs of wear including discoloration (a gold color is evidence of heat) and scoring, pitting or dents. If you see any of these, it's time to replace, rather than repack, the bearings. Pull the hub off the spindle and lay it with the inner sidewall facing up. Inspect the spindle for any visible damage and then, feel it with your hand. The surface should be smooth. NOTE: Avoid cleaning bearings and races with gasoline because this can harm the inner seal; paper towels and rags will do the job. 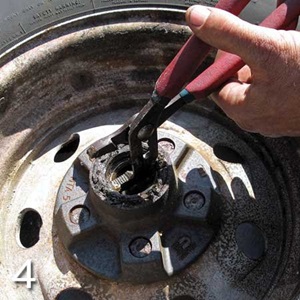 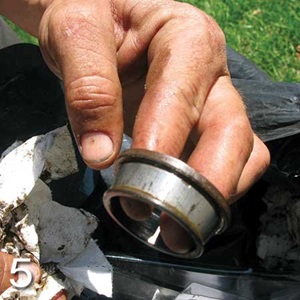 Just like the outer bearing, the inner bearing is seated in a race, also called a bearing cup or a bearing cone. If the bearings are in good condition, remove all the remaining grease in the hub and inspect both the inner and outer races for pitting, scars and/or discoloration. If everything looks good, all you need to do is repack with fresh grease and a new seal and cotter pin (Go to Step 7). However, if any show signs of wear, it's time to replace everything. NOTE: If a bearing shows wear but the race looks fine, you still replace both. 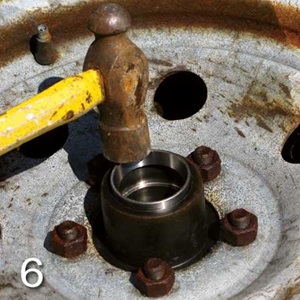 Getting races out of the hub requires placing a round punch placed against the inside edge of the race and, with small taps with a hammer, moving in a circular motion to dislodge it from the hub. The inner race is removed with the outer sidewall facing you and the outer race is removed with the inner sidewall facing you. Some folks use a wooden dowel instead of the round punch. Whatever you choose, wear eye protection. Place a new race on the hub and with a soft hammer, pound the race all the way in with a circular motion so that its outer edge is flush with the hub. Others position the old race above the new one and pound it in that way. There's even a race insertion tool available at auto-parts stores. You'll know it's in the proper position because it won't go in any further and the sound will change when properly seated. 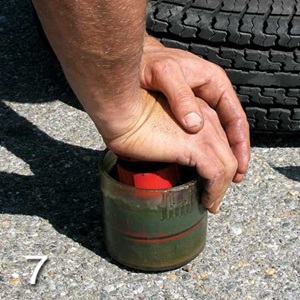 Grease the inner hub and then pack the inner bearing with grease. Legendary Trailers uses a bearing packer (pictured), which can be found at most auto-parts stores for less than $15. Another way is to put grease in the palm of your hand and then place two fingers of your other hand through the larger side of the bearing. Now pack grease into the bearing rollers while rotating the bearing into your palm. You'll do the same with the outer bearing later. 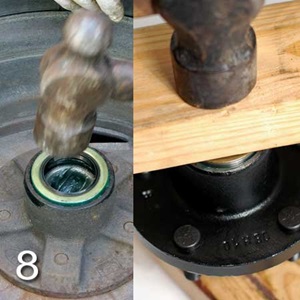 Now install the new and double-lipped grease seal. Double-lipped grease seals have a better chance of keeping water out of the bearing assembly than single-lip seals. It's usually included in bearing kits so be sure to ask or do some research prior to buying. The kits sold at West Marine from CE Smith have double-lip seals. Many prefer using a board across the seal to hammer against, thus protecting the seal. You have now completed the inner bearing assembly! 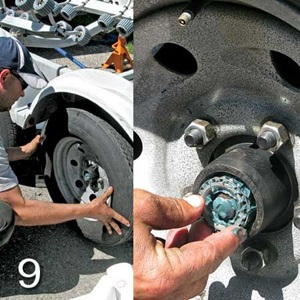 Turn the wheel over and install the outer race. Then lift the wheel onto the spindle being careful not to poke the grease seal with the spindle's outer edge. Grease the race and add the outer bearing. 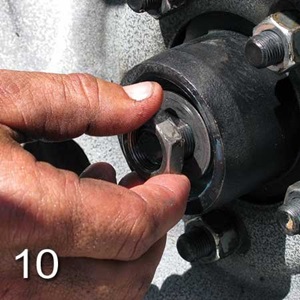 Next, add the spindle washer, the axle nut/castle nut tightening until it stops. Bo Adams, vice president of CE Smith (they make bearings for West Marine), says the nut "should be a snug fit" but if too tight, the assembly can be damaged as a result of heat generated when the trailer tires are going down the road. If too loose, the wheel will wobble. Finally, add the castle nut or the castle-style axle washer. 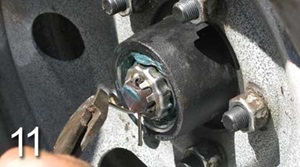 Now put a new cotter pin on the assembly, turning both ends in the same direction to lock it in place. 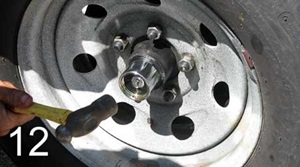 Add the Bearing Buddy or dust cap and spin the wheel. You shouldn't hear any sound except your own voice saying, "Yes!"

1. The hub feels hot to the touch during refueling stops on the highway. This can also be the result of a brake shoe or brake pad rubbing while traveling.

3. Obvious noise is heard when spinning the wheel while it is jacked up.

4. If the usually reliable dust cover suddenly comes off, this can be the result of excessive heat and pressure buildup in the bearing assembly.

Pat Piper has written for many magazines including BoatUS Magazine, Chesapeake Bay Magazine, and Diabetes Health and has written/ghostwritten eight books. He's currently an executive editor for Westwood One Radio.