Maneuvering A Boat With Docklines

Docklines are for more than just tying up your boat. Here's 5 techniques that can help you maneuver in tricky situations. 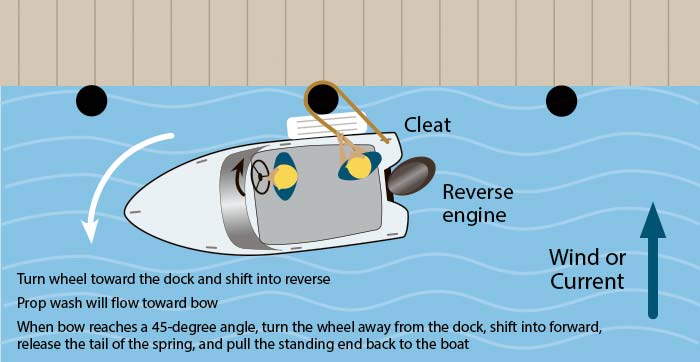 Springing off is a great technique if you need to get off the dock and have a boat in front of and behind you, such as at the fuel dock, or the wind/current is pushing you against the dock.

To those in the know, our docklines offer a bounty of potential beyond simply keeping our boats snugly tied at the dock. These include their use in maneuvering a vessel in tight quarters or under adverse circumstances, such as high winds, strong currents, no motor, or lack of crew. Here are a few basic techniques that allow your docklines to go above and beyond their normal duties.

When the wind is up and you're pinned against the dock, it's time to use probably the most well-known of the dockline-assist techniques — springing off. Use a spring line and sturdy dock cleat or piling to angle yourself off of a dock. Requirements are a couple of large fenders and a crew member, one that has been briefed on the procedure beforehand and knows what's expected. Steps will vary, depending on whether you want to leave the dock stern-first or bow-first, and other circumstances such as wind strength, current, and proximity of other boats. But basically, in each case, the spring line is looped around a dock cleat or piling located amidships, with both ends attached to the boat at the end opposite to the end that you want to move away from the dock. In both cases, the lines are attached to the vessel on the side that is against the dock.

Technique 1: Springing Off The Dock Bow-First

Springing Off a Dock: How To Leave a Dock Against The Wind

Technique 2: Springing Off The Dock Stern-First 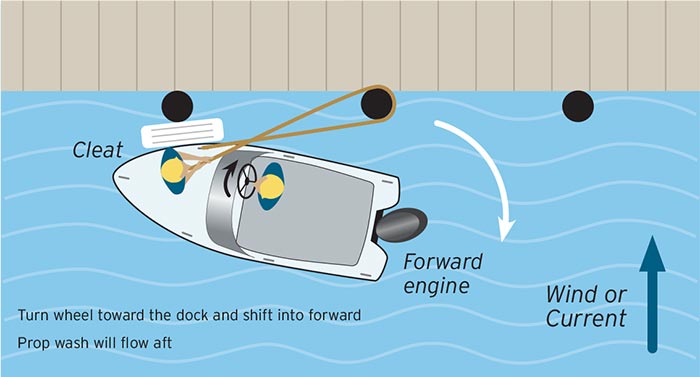 Springing Off: Leave a Tight Berth Using a Spring Line

Let's say you're moored port side to a dock and need to shift your vessel forward a few feet to free up space for another boat to dock at your stern. The wind is howling, but luckily blowing from your stern and along the dock in the direction you need to move. Use the wind to move your boat along the dock while keeping it under control with your port stern line. 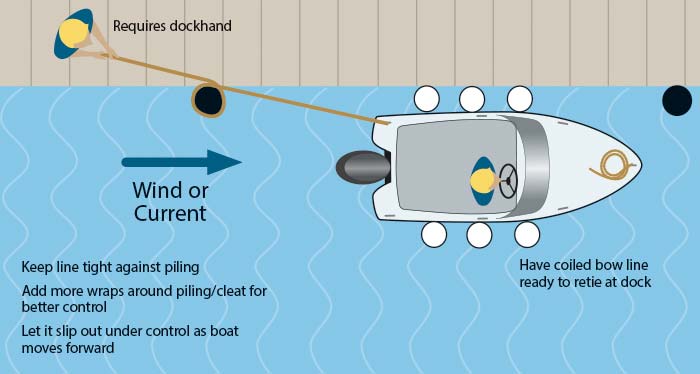 A half turn on the piling or cleat should be plenty, but add more wraps if you need greater leverage for a larger boat or stronger current.

A couple of notes: The above scenario assumes the stern line is strong enough and of sufficient length to reposition the boat to the new location. If not, replace it with a longer line prior to shifting. Once secured, you may need to shift the stern line to another dock cleat or piling, if there is another one that is better positioned.

If there is concern about keeping the vessel under control (due to stronger winds or current) you can have a crew member check the bow line as well during the maneuver. Finally, you can also use checking to control a vessel in other situations. When docking during high wind or current situations, a dockline with one or two wraps around a piling can be used to control movement into a slip or berth by simply adjusting pressure on the line.

Flipping a boat is a technique that allows you to change the bow/stern orientation of your vessel without starting the engine. It's used when a vessel is tied alongside a dock with a strong current or wind running parallel to the dock.

Let's say you used the current as a brake when docking and are now oriented bow into the current, port side to the dock. The problem, however, is the current will shift and be running in the opposite direction by the time you are ready to leave. You want to take off with the bow into the current because of lack of space between you and the other boats around you. Use lines to reverse the boat's orientation while maintaining control and not becoming unattached to the dock. 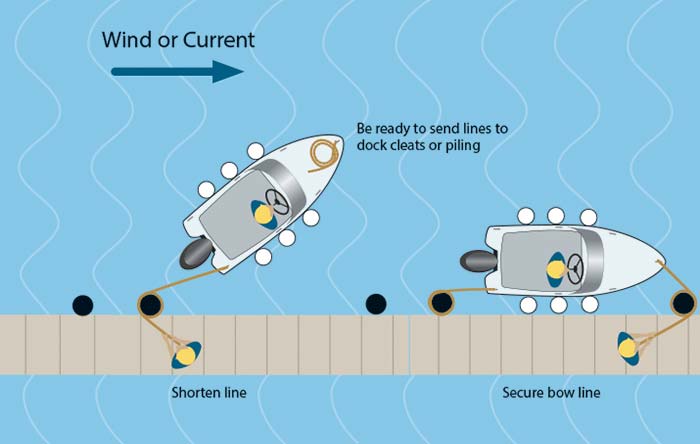 Flipping a boat allows you to change its ­orientation along the dock without having to use the engine.

Note: As a precaution, the captain (or someone who can operate the vessel) should stay onboard while flipping the vessel or performing most of these operations. Often having the engine running in neutral, ready to be shifted into the gear appropriate for the circumstances, can add an extra measure of safety should things go awry.

While you can do this maneuver singlehandedly in a pinch, having an extra set of hands on the dock to cast off the bow line and keep the transom from bumping the dock as the vessel pivots is highly recommended.

Technique 5: Entering A Slip With A Strong Parallel Current Or Crosswind

Coming into a slip with strong parallel current or wind can be tricky, but the use of docklines can once again help keep things safe and under control.

In the scenario below, let's assume you're approaching a slip on your starboard side. 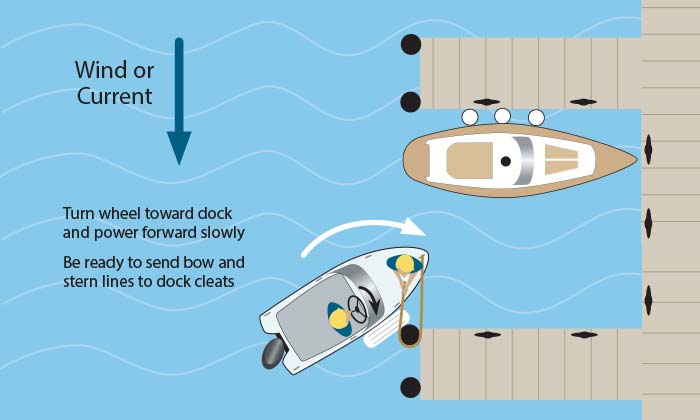 Tight slip and working against the wind/current? This technique will help you get into the slip safely and in a ­controlled manner.

And Keep These Points In Mind

When And How Electronic Charts Are Updated

Not as often as most boaters might think. Find out how and when your electronic charts are updated with critical navigation information.

Seakeeper says its new Ride vessel attitude control system for boats eliminates up to 70% of underway pitch and roll to improve comfort.

Lessons Learned From Being Caught In The Fog

The sonar — and then the horns — went on the fritz just when thick fog rolled in, ­making them sitting ducks for ­collision or grinding aground

Capt. Frank Lanier is a SAMS® Accredited Marine Surveyor with more than 40 years of experience in the marine and diving industry. He’s also an author, public speaker, and multiple award winning journalist whose articles on seamanship, marine electronics, vessel maintenance, and consumer reports appear regularly in numerous marine publications worldwide. He can be reached via his website at captfklanier.com.