For those impacted by Hurricane Ian, we hope you and your loved ones are safe. We are here for you. Policyholders, you can easily file your claim online. Claims Info

TowBoatUS And The Case Of The Wayward Weather Buoy 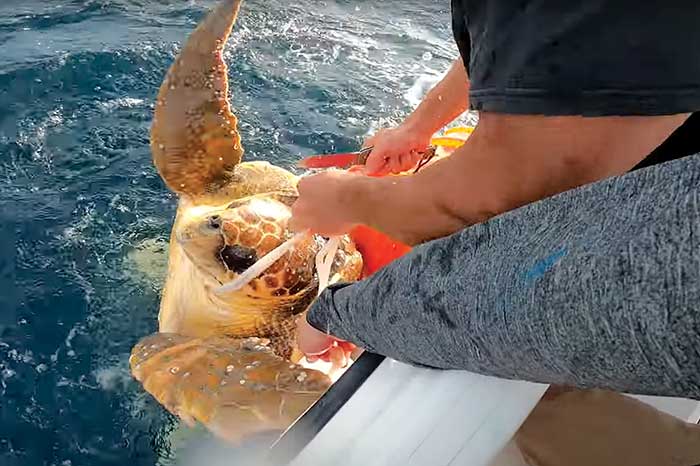 What do you do when the U.S. Navy asks you to retrieve an errant weather buoy, but the buoy seems to be traveling to different locations?

"The buoy had broken free of its mooring near Port Canaveral, Florida, and, after a weather delay, we were tasked to find it," says Shonda Kennedy, owner of TowBoatUS Daytona and St. Augustine. "The problem was, the Navy kept advising the buoy appeared to be bouncing around between three different sets of coordinates."

Captains Trey Tuggle and Jeremy Larson of TowBoatUS St. Augustine were on the case. But it wasn't an easy one to solve. "As the location data has a several-hour delay, by the time we would arrive at the buoy's last-known position, it would have mysteriously vanished," explained Kennedy. Finally, after a seven-hour hunt, the pair of TowBoatUS gumshoes located it — with a sea turtle attached. It turns out, the turtle had become entangled in the lines and was dragging the buoy around.

With the turtle making a steady 2 to 3 knots west toward the Florida coast — and yet somehow still able to dive, even with the buoy tangled around its neck — Tuggle and Larson were able to cut the line, free the turtle, and retrieve the buoy.

"We're thinking ‘she' was headed ashore to lay eggs," said Kennedy. Here's hoping she did just that. Kudos to "detectives" Tuggle and Larson for their good work!

Whether you're a snowbird or a local ICW boater, this free monthly newsletter is a must-read for avoiding navigation hazards along the Intracoastal Waterway.

Set Your Course For The Sailing Museum

This new sailing museum in Newport, Rhode Island, allows seasoned sailors to revel in their sport while enticing new sailors into the family.

Anglers can now target their catch at distances up to 750 feet while accessing more detailed bottom information.

Scott Croft is the Vice President of Public Affairs for BoatUS. He enjoys sailing on the Hudson River.