The federal budgetary process is anything but pretty, but real-world benefits are coming out of Washington. The good news? Boaters are well-served this go-round. 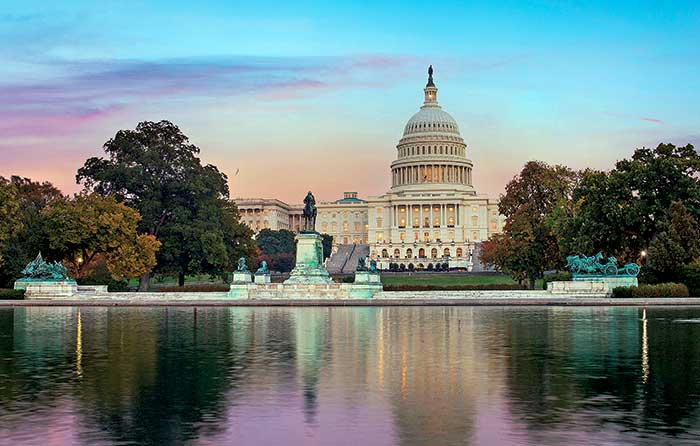 We all remember the "infrastructure" bills debated ferociously by our federal government representatives in the nation's capital. Last November, BoatUS Magazine provided a preview of was in these federal budget proposals. Since then, what emerged from a winter of contentious negotiations and votes was a landmark agreement on a bipartisan $1.5 trillion "omnibus" spending package that President Biden signed into law March 22. It contains investments in COVID mitigation, Pell college grants, cancer research, aid to Ukraine, and, in particular, long-needed investment in our critical infrastructure: bridge and road repairs, water systems repair and lead-pipe overhauls, improved rail and public transit, upgrades to airports and ports, upgrades to high-speed internet, improvements to our cybersecurity. You may be asking, "So, what's in it for recreational boaters like me?"

Depending on where you live, look for long-needed work starting up in dredge barges working vital channels, local projects to slow the spread of invasive species and restore fish habitats, and new pumpout stations being added at docks.

"This is real money," explains David Kennedy, manager of BoatUS Government Affairs. "These are appropriated dollars that now have to be spent into these programs that directly benefit recreational boaters."

The top priority for BoatUS remains the program that provides recreational boaters the most bang for the buck, the nearly $750 million "Sport Fish Restoration, Recreational Boating Safety, and Wildlife Restoration Act of 2021," which reauthorizes the Sport Fish Restoration and Boating Trust Fund through 2025. That program funds state-based habitat-restoration projects and sportfish conservation, infrastructure for boating access like launch ramps, and boater education programs.

In 2020, more than $740 million was collected into the Fund through revenue sources, including the federal excise tax on recreational fishing equipment, the fuel tax attributable to motorboats and small engines, and import duties, according to the American Sportfishing Association. That was an $83 million increase over the previous year, due primarily to increases in fishing equipment excise tax receipts (and another sign of the pandemic boating boom).

"This fund is one of the most successful ‘user pay — public benefits' federal funding programs," Kennedy says. "Boaters pay into it. Then boaters directly benefit from the fund with the installation of pumpout and dump station facilities, transient docks, recreational boating access, local boating safety programs, and fisheries management and restoration. It really is a win-win government program."

Let's take a closer look at where this needed federal funding is bound. Kennedy advises patience. "It takes time for each of these programs to be launched and on the water, but they're paid for, they're coming, and they'll benefit boaters."

"Recreational fishing and boating priorities are continuing to cut through the noise in Washington, D.C. We're thrilled to see this additional funding to improve opportunities for anglers in national marine sanctuaries," says Jeff Angers, president of the Center for Sportfishing Policy, which represents the nation's saltwater recreational fishing industry. Anglers also praised increased funding for management for red snapper and the Modern Fish Act. Also included is increased funding for operations, maintenance, and equipment used by the National Fish Hatchery System, which consists of 70 national fish hatcheries in 35 states that produce more than 60 different species of fish. The system also includes research and technology centers.

$21.5 million for harmful algal blooms (HABs) to research and develop early warning systems and improved forecasting for shellfish-killing algae, enhance detection of HAB toxins, test HAB control methods in marine and freshwater, and investigate the social and economic impacts of HABs. One project has researchers testing technology to control the Karenia brevis blooms that plague coastal Southwest Florida by removing the algal cells from the water column.

$348 million to continue the Great Lakes Restoration Initiative (GLRI). A comprehensive program that works to protect and restore the Great Lakes through habitat restoration and the prevention of aquatic invasive species (AIS) and HAB. This is the largest investment in the Great Lakes in two decades, according to NOAA. Primary focus areas are reducing point sources of man-made toxic substances; invasive species, including the zebra mussel, quagga mussel, round goby, sea lamprey, and alewife; nearshore health of communities surrounding the lakes threatened by nonpoint source pollution; and habitat restoration through dozens of local projects across all Lakes states. Since its launch in 2010, GLRI has supported 85 habitat restoration projects over 4,600 acres of habitat for fish and wildlife.

$43 million toward Illinois' efforts to help prevent the spread of aquatic invasive species, including invasive carp and funding for the Brandon Road lock and dam project, which is being retrofitted with a multilayered defense system — an electric barrier, underwater sound, an air bubble curtain, and an innovative "flushing lock" — all to keep invasive carp out of Lake Michigan. The fish reproduce rapidly and aggressively crowd out native species for food and territory.

Sea levels have been creeping up for decades, and the speed is now accelerating. All of us on the coasts need an action plan.