Whether it's competitive athletics, entrepreneurial pursuits, or YouTube videos teaching fishing and boating, twin sisters Amanda and Emily Gale heed the call of their passions.

For those who fret that the universe is stingy in allowing people to chase their dreams over the horizon, here's a fish story whose numbers (450,000 followers on TikTok for example) don't lie and whose characters (brainy and beautiful identical twins) may seem larger than life, but are very real. "I'd say we do everything together except our social lives," explains Emily Gale. "Either way, we're best friends, sisters, roommates, and business partners. We're also running and workout buddies. So, I'd say we do almost everything together!"

Several years ago, Amanda and Emily were college students deep into a hard-charging trajectory of athletics and academics. Then the unexpected happened. The Florida residents, top-rated runners and pole vaulters whose achievements brought them scholarships to pursue pre-med studies at the University of Miami, were at a track meet. One of their coaches called out, "There's the Gale Force twins!" The nickname stuck.

Later, when they decided to take a break from the double-barreled pressures of track and study and got jobs aboard a sportfishing boat out of Key West, the nickname "Gale Force Twins" stuck.

"At the time, it didn't even click what a gale force wind is," Emily recalls. "We'd been working so hard in college and sports, trying to figure out how to fit everything into traditional careers. This job opened our eyes to a whole new path and to a life on the water. It was an instant 'Yes! This is what we need to do!'" They moved to the Florida Keys and continued earning sea time aboard various charter fishing boats while gaining hands-on practice in boathandling as well as studying seamanship and safety regulations. In 2017, they earned their U.S. Coast Guard 50-ton masters licenses, then struck out on their own with a charter fishing business under the name Gale Force Twins. Their rig was a 32-foot Intrepid named, of course, Gale Force. 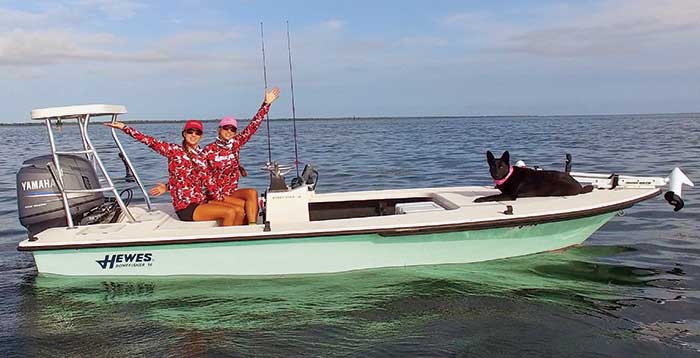 Amanda and Emily Gale with dog Kona aboard Little Force.

"We were doing so well financially at this," Amanda recalls thinking, "Why am I going to medical school? After that, we never gave medical school a second thought." Except when they mention their age, which is 27. "We'd just be getting into our residencies and getting started!" Emily laughs.

Such a bushwhacking approach to life is the norm for Emily and Amanda. When they were children, their family went on annual vacations to the Florida Keys, but fishing wasn't a family pastime. "We both picked it up quickly and gravitated toward it," says Amanda. "Everyone was surprised back then that all of a sudden we were fishing every day. We were only 9 years old. We saw other kids fishing off the docks and said, hey, we want to do that. We caught little baby snappers, stingrays, sharks, and just had a really great time."

An offshore fishing charter arranged by their mom as a 13th birthday present was the turning point, converting their curiosity into a passion. Obstacles they later encountered while trying to demystify a pastime often shrouded in secrecy and ego only fueled the fire further.

"When we asked a fisherman or someone behind the counter at a tackle shop a question, they'd tell us what to do as if it was their way or the highway, and too bad if we didn't understand it," Amanda says. "We felt intimidated. They'd say something like 'You take the jig and ...' Do people know what jigs are? That's not common sense to someone who isn't a fisherman.

"Anybody can go fishing. Regular people can give it a try, and it doesn't have to be this big, scary thing. You shouldn't have to walk into a tackle store and feel stupid because you don't know what pound test to use for snapper," she says.

Four years into running their charter business, like countless others, they were shut down by the pandemic. It inspired a new business model that would allow them to devote themselves to leveling the fishing playing field for all.

"We are so used to thriving off a busy life, we decided to give ourselves a job during lockdown," Emily says. "We created educational, entertaining videos on YouTube and Facebook. After three months of committing full-time to content creation we couldn't believe the positive response we received. Through online content we can teach hundreds of thousands of people how to fish and boat as opposed to when we were chartering, when we could only take four at a time."

With their presence on digital platforms taking off, and their audience growing by leaps and bounds, they shuttered the charter business for now to devote themselves full time to content creation. The metrics are worth noting. In March 2020, they had fewer than 1,000 YouTube subscribers. They uploaded a new video three times a week for three months, and in month four they hit more than 40,000 subscribers. Their following has continued to climb and has approached 130,000 on YouTube, 450,000 on TikTok, 225,000 on Facebook, and 65,000 on Instagram.

Those frustrating experiences in tackle shops early on account for the focus of their mission. "We didn't grow up in a fishing family, and fishing isn't always common sense, so educating and explaining things to our viewers comes naturally," Amanda says. "We didn't want our viewers to feel like we were speaking a foreign language." 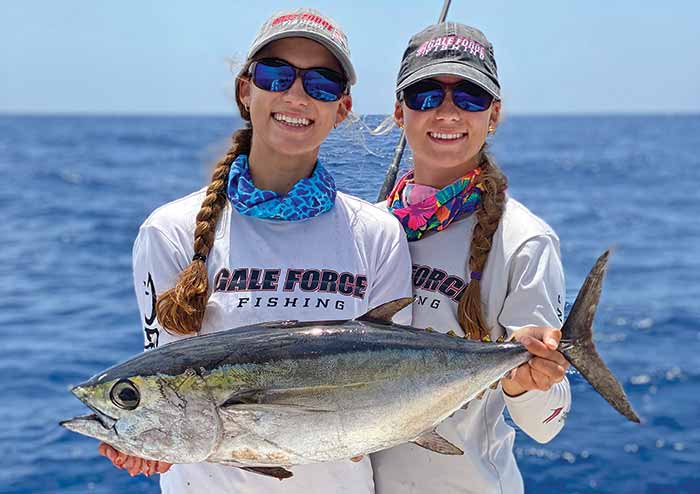 The twins do almost everything together, including posing for photos with their catches to post on social media.

Emily and Amanda have thrown themselves into refining their video production skills. They transitioned from iPhones to a GoPro and absorbed all they could about the editing process while fielding an avalanche of incoming messages from viewers craving more instruction and offering suggestions for future videos. In front of the camera, their cheerful, can-do demeanor, their habit of finishing each other's sentences, the way they seamlessly hand the helm back and forth, and last but not least, their identical sporty attire made many in their audience want to emulate them and their gear.

"We'd get messages like, 'I want to get my wife some fishing clothes, I want to fish with the rod you have,'" Amanda says.

The upshot? The launch of a growing inventory of Gale Force clothing, gear, stickers, and the centerpiece product: four custom rod designs the twins took from prototype to assembly line, and which are selling well. They appeared at boat shows, entered into partnerships with marine industry players like Simrad and West Marine, and host fish camp trips for women and children. They've expanded their fleet to include an 18-foot Hewes with a 115-hp outboard for inshore forays, aptly named Little Force. 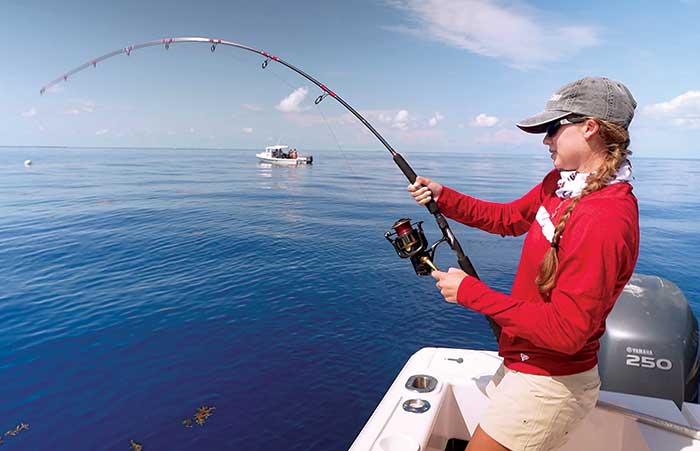 Amanda and Emily have expanded their line of ­clothing and gear to include four custom rod designs.

The pandemic wasn't the only reason the timing is right for the Gale Force Twins in their unique take on an already-integral American pastime and sport. "There aren't many family-friendly female fishing [social media] influencers that really push education," Emily says. "We were able to find the open opportunity we did by really pushing out as much quality content as we could."

Amanda concurs. "Sharing our story as female captains is especially important to the next generation," she says. "Many young girls and women can't picture themselves taking on the trade of fishing and operating a vessel. We want to show the next generation that they, too, don't have to have a dad, grandpa, or uncle to teach them. We didn't and still found a place for ourselves in the industry.

"Over the next five years, our goal is to really grow our line of Gale Force rods," Emily says. "We're adding a bottom-fishing and a trolling rod. We'd also like to host our own fishing show and upgrade our 32-foot Intrepid. We like to say, 'Make plans, but carry a big eraser.' It seems every year we're updating and modifying our five-year plans as new opportunities come along."

Elaine Lembo has spent more than 35 years as a writer and editor in the publishing and marine industry fields.