Marine Weather Routers: They Know When You Should Go

Professional marine weather routing involves a whole lot more than reaching for that cool app on your smartphone or tablet.

For one offshore sailor aboard a 38-foot pilothouse cruiser in the South Atlantic last March, and his professional weather router back on shore, the worst storm ever was the one that wouldn't let up for 45 days. COVID-19, a pandemic cyclone with no foreseeable end, slammed in from all directions, caused numerous route changes, and kept him offshore while his food and fuel supplied dwindled.

For professional marine weather routers, whose specialty service already requires 24/7 job devotion and the ability to strategize for their clients at a moment's notice, the virus added an unprecedented layer of complexity to their work.

"I've been doing this since 1987," says router Ken Campbell of Commanders' Weather, who consults for delivery, grand prix, and yacht club racing crews as they move and compete around the globe. "I've never experienced anything like this in my entire career."

The Long Way Around

On March 16, 2020, progressing from the Falkland Islands to South Georgia in the South Atlantic, an American client of Campbell's had sailed alone on his modest boat more than 1,000 miles through storm-tossed conditions and was getting low on fuel.

"When he came within 400 miles of his scheduled landfall at Tristan de Cunha for food, fuel, and water," Campbell says, "he was told over the radio not to come closer, that the island had just closed entry due to the coronavirus. He'd been at sea 32 days!" 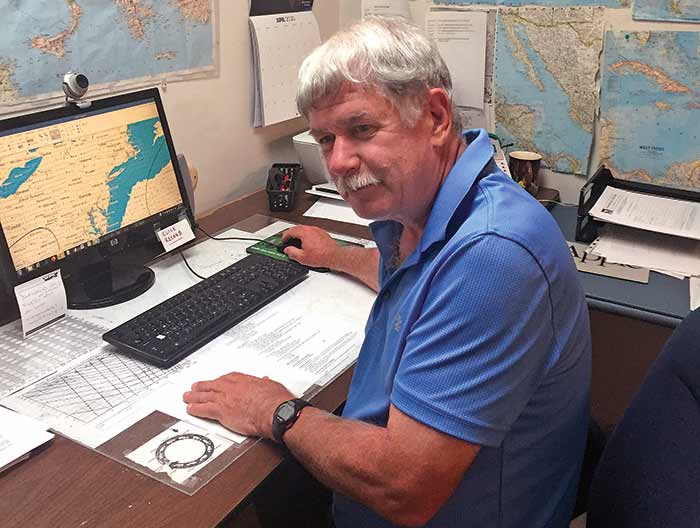 Router Ken Campbell had his work cut out for him to reroute boaters during the COVID pandemic.

With Campbell's help, the skipper carried on another 1,500 miles toward Cape Town, South Africa. But authorities there also closed entry just before he arrived. Again he returned to sea. Next, Campbell diverted him 1,300 miles to the South Atlantic Ocean island of St. Helena; officials let him enter to rest but banned him from leaving his boat for fuel, food, or water. Campbell got permission to route him 700 miles to Ascension Island. There he did get fuel, food, and water, but he wasn't allowed to leave the boat.

In more normal times, such as the annual spring and fall migrations on the East and West coasts, professional routers do their job best when they deliver daily customized advice for passage makers to reach destinations safely and efficiently.

"If a client is using us for forecasts, we constantly monitor between forecasts," says Jeremy Davis of Weather Routing Inc. "Routers need to be aware of global weather patterns on a daily basis — how they've been changing, what the pattern is likely to be for the next week or so. We strategize with clients to avoid surprises, like not crossing the Gulf Stream when all hell could break loose."

Beyond weather — the squall lines, tropical storms, rapid changes in atmospheric pressure — matters such as schedules, boat type, size, crew, oceanographic conditions, sea state, and fuel capacity influence routing. "We look at all of their parameters," Davis says. "If they have sensitive guests onboard, flexibility to depart sooner or later, ability to stop at other ports along the way for shelter, we'll recommend the best option for them." 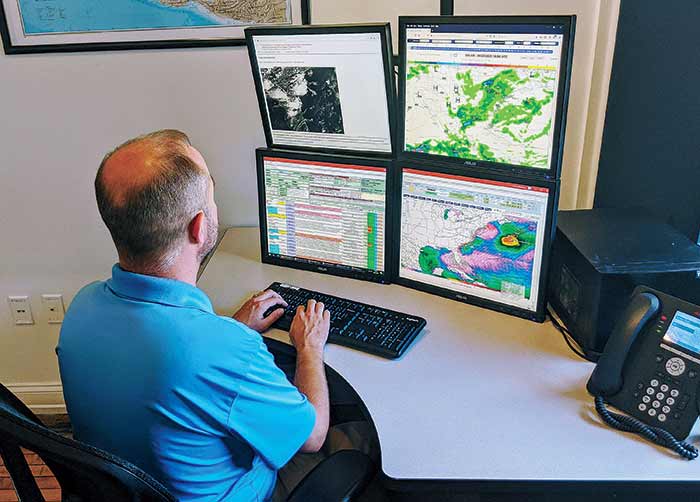 Jeremy Davis of Weather Routing Inc. monitors the weather for a client.

"If a vessel is to increase its speed to avoid worsening weather, will the increase in speed affect the fuel consumption? Will the vessel have enough fuel to reach the desired destination? If the vessel cannot increase its speed, is it because of an underlying issue like an engine problem, or is there marine growth on the bottom of the vessel that is increasing the vessel's drag?"

Other considerations to the custom advice service include embarkation season and destination/region. In the Great Lakes, for instance, the biggest issues are thunderstorms and cold fronts in summer. In the Pacific Northwest, the challenge is getting in and out of rivers, where swells and wind direction are impacted by land contours.

Thinking of the Bahamas next winter? "Both sail and power boats have problems if they're too exposed," says Jones. "In the Bahamas it can blow up with winds of 30 knots from the northeast direction. From December to March, you can have unsettled conditions for weeks."

Then there's the occasional delivery crew setting out from New England in January. "The weather can be volatile," Davis says. "Lows, nor'easters, fronts, highs, everything can be rapid-fire."

All the routers say that the skipper's intent is also key in this transaction. Ken McKinley of Locus Weather says he always asks his clients, "‘What do you want out of the trip?' I've had two boats in the same port going to the same destination. I'll tell one to go and one not to go, just because their imits are different. I tell people you must define your limits well ahead of time, write them down, and stick with them. That avoids what I call ‘limit creep.'"

Reputable marine weather routers hold degrees in atmospheric science or meteorology. Choose one who also has years of on-the-job experience and whose accessibility matches your comfort level. Communication is via single sideband, satellite phone, internet, email, or personal texting devices linked to satellite-based services. Having more than one means of communication is best.

Routing services are tailored to each client. Expect to pay as little as $30 for a one-time phone consult and as much as $75 to $175 or more for a full passage forecast, depending on length of trip. Factors affecting rates include communication frequency (daily, twice daily, periodic) and mode (text, email, satphone, SSB).

With readily available online resources and effective, colorful graphics on smartphones and tablets, why take the time to educate yourself and sharpen your own observational capabilities or pay a professionally trained meteorologist to route you?

"So much data are now available on your devices," says W. Frank Bohlen, professor of marine sciences at the University of Connecticut. An offshore sailor, Bohlen also organizes weather seminars for the Cruising Club of America. What you see on the digital screen, he says, isn't always what you get when you poke your head out the porthole. "Don't be surprised that a forecast may sometimes be off. Weather is the collision of air masses. The resulting flows are turbulent and, to some extent, chaotic. Turbulent conditions complicate prediction."

Predicting future atmospheric conditions typically relies on numeric computer models, and the quality of model output is dependent on the accuracy of inputs to that model. "Observational data at sea are nowhere near as dense as they are over land, so sometimes the marine forecasts are not as good as the terrestrial ones," says Bohlen. On land, a data source such as the U.S. government model for North America, NOAA's High Resolution Rapid Refresh Model, is updated four times an hour, resulting in greater accuracy. Whereas, data sources for weather predictions at sea include weather balloons, airplane sensors, satellites, and volunteer reporting ships and buoys that relay wind, wave, and current information.

These models are some of the best tools meteorologists have today, says McKinley of Locus Weather. "But, they're not 100% accurate. Even with claims that the model is ‘custom,' it's still a model." Good to remember when you're at sea and reach for the phone or the tablet.

The practice of following expert advice while also making independent judgments for the safety of your own vessel and crew is in line with the philosophy of Chris Parker, a marine weather router who's guided crews since 2004. Like everyone else, Parker found himself swept up in the coronavirus pandemic, and his Marine Weather Center was tapped by the Salty Dawg Sailing Association to guide 184 boats north from the Caribbean. Pandemic-related closures of airlines and boatyards had forced members to contemplate unanticipated offshore voyages with insufficient crew to secure their boats before the June 1 start of hurricane season.

Working around the clock, Parker provided routing services paid for by SDSA and extended to individual members free of charge. Hank George, SDSA president, wrote in the May 2020 "Dawg Tales" newsletter that the migration experienced "breakage, minor injury, failed engines, arrival tows, parts shipped in from the U.S. and England, and a particularly rough sailing spring with frequent cold fronts, strong low-pressure systems, gales, and, oh yeah, two tropical storms — Arthur and Bertha." With Parker's guidance, everyone reached their destination. (See "Snapshot: One Router's Philosophy And Rig" below.)

Snapshot: One Router's Philosophy And Rig 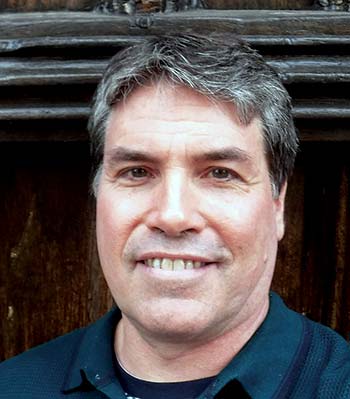 I became involved with Salty Dawg rallies in 2011, though I've routed rallies professionally for years. I share the Salty Dawg philosophy: Captains and crews should make the best decisions for their vessels rather than abdicating decision-making to the rally.

From a weather router's perspective, rallies present challenges. In the case of the Salty Dawgs, vessels don't all depart or arrive at the same time or the same place, so the forecasting and routing workload is much higher than with a typical rally. Yet the Salty Dawg structure also presents opportunities. Forecasts are targeted at smaller groups of vessels, allowing better customization and a better experience for participants and the weather router. Forecasts verify better, and we work more closely with vessels.

At Marine Weather Center, we provide forecasts and routing advice via SSB radio (in addition to email, text message, voice telephone, interactive webcast, and/or fax). We use a custom-built nested pair of high gain Yagi antennas, with two radios, coaxial cables, and feed points, operating on 8MHz and 12MHz (plus an inverted-V antenna for 4MHz band). We broadcast simultaneously on two channels, allowing vessels to choose the better of the two, which varies depending on radio propagation. Antennas are matched perfectly to the channels we're licensed for, so we don't need antenna tuners, and all radio output is radiated at maximum efficiency.

We can talk one-on-one via SSB radio with vessels anywhere within about 3,000 miles of Florida every morning and evening. For vessels with good internet connectivity (cellphone, Wi-Fi, and so on) but without SSB, we simulcast SSB nets over the internet with interactive webcasts.

We offer two versions of webcasts: full multimedia, where the client can see and hear us as well as see the weather we're describing on our desktop screen sharing. For those with less-robust internet, we offer an audio-and-texting-only version. Both webcasts allow clients to ask questions and receive one-on-one forecasts. Of course webcasts are of little use offshore; for that, clients use SSB. For vessels without SSB, we offer full forecasting and routing support worldwide by email, text, and satellite-based voice telephone.

In cruising circles, word-of-mouth advice travels fast. Boaters are notoriously vocal in their assessments of anchorages, equipment, and services. Perhaps the best endorsement any router could wish for is the one that arrived unsolicited in Parker's email inbox from Connor Smith of Grace, a 44-foot Brewer, in pre-COVID times.

"When we were in the islands of Panama in November/December, looking to head north to Colombia/Jamaica, you helped instruct us about what it would look like to plan a trip in December, January, or February. You noted that despite the statistics of high wind probability off Colombia between January and March, weather windows still pop up. This was invaluable advice, and we had a glorious extra month in the San Blas Islands before catching an amazing weather window north. That alone was worth your fee."

Elaine Lembo has spent more than 35 years as a writer and editor in the publishing and marine industry fields.