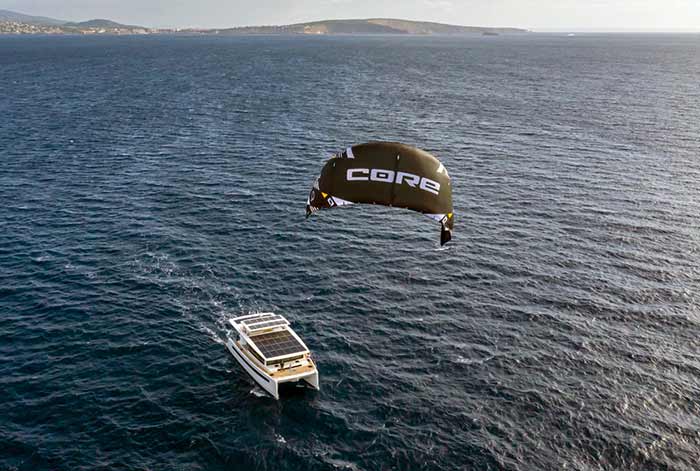 After introducing the first oceangoing production yachts in the world fully powered by solar energy in 2018, Austrian builder Silent-Yachts has added a kite sail system that can add up to 5 knots of speed.

The new SILENT 60 carries 42 solar panels for 17 kWp of solar energy that produce zero-emission cruising for up to 100 nautical miles per day solely on solar power. The SILENT 60 is also fitted with a compact 9-square-meter (97 square feet), or 13-square-meter (140 square feet) kite wing.

"The main advantages of a kite over a conventional sail system are that it does not throw shade on the solar panels, does not need a tall mast, and generates up to 10 times more power per square meter than a traditional sail," says Michael Köhler, the founder and CEO of Silent-Yachts. "It makes even more sense for the SILENT boats that run on renewable solar energy because the power generated by a kite easily exceeds the energy consumption of the system, so you can charge the batteries while cruising under kite power. And besides that, it's great fun!"

Sure, it's base price is about $2.6 million, but 'tis the season for dreaming, so take a look at kite power in action.

After inflating the kite, it is released overboard to drift away on the surface of the water. Pulling on the lines launches it into the air and once it reaches the optimal flight height, it begins to trace a figure eight in the sky and generates power to pull the yacht.

If you want to stop kiting, the automated app controls move the kite to a position right above the boat where it has the least pull on the line. From here it can be winched down electrically and collapsed over the foredeck ready for stowage.

"We tested the performance on different headings and at wind angles of up to 40 degrees with the 9-square-meter kite," says Silent-Yachts' technical controller (aka captain of Hull No. 1) Mike Wandler. "Unlike a conventional sailing boat, the best results were directly downwind. Under kite power with no engines on or propellers turning, the boat speed was between 4 and 5 knots. We then switched on the electric motors drawing just 1kW each to reduce drag from the propellers and improve the flow of water over the rudders for better steering, this led to boat speeds from 6 to 7 knots over the same headings — a significant improvement on our original predictions." 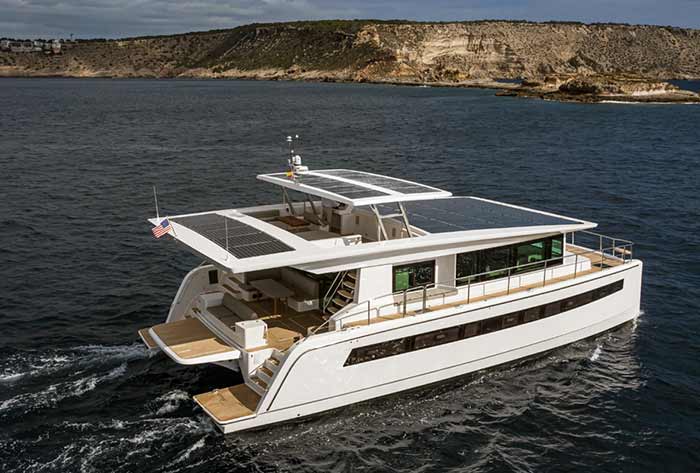 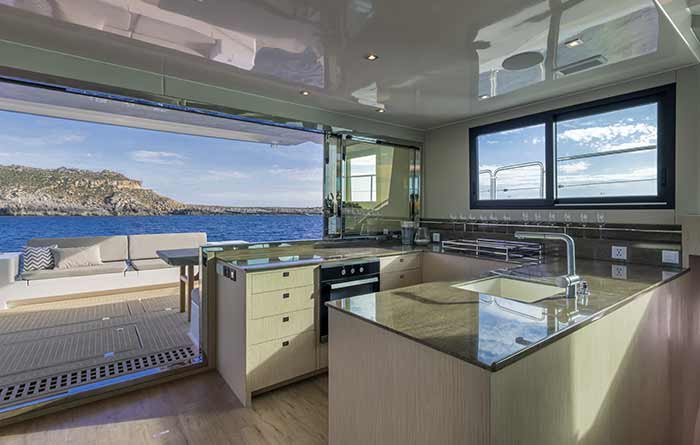 The SILENT 60 has four guest cabins on the lower deck, including a spacious master suite. There are numerous social areas on board, including a main saloon, aft cockpit, cozy bow area, and a flybridge.

Another big advantage of a kite compared to a conventional sail is that the kite flies in much higher altitudes and therefore gets more steady and stronger winds up there. Therefore, it can already be used at low wind speeds of less than 10 knots when it would not make any sense to hoist a sail on a sailing boat of comparable size.

"At 5 Beaufort [17–21 knots] we can drive with the kite indefinitely at 6-7 knots, which is faster than a comparable sailing catamaran in such wind condition when crossing the ocean, for example," adds Kohler.