How Secure is Your Marina Likely to be in a Hurricane?

How Some Marinas are Dealing with the Problems of Storm Surge, Hauling Boats, Exposed Locations… What About Hurricane Plans? 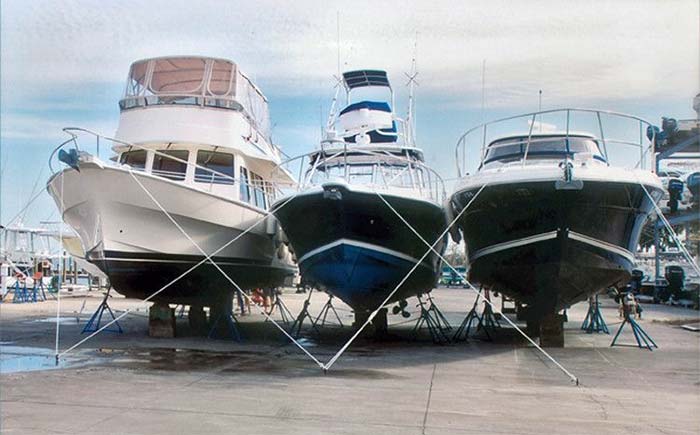 When hurricane Fran came blasting across North Carolina's Outer Banks in October 1996 and up Masonboro Sound, Susie Brigman said she'd never seen anything like it. In her 26 years at Masonboro Boatyard, Susie had seen several hurricanes, but this category three storm was something altogether different.

Before the storm, she and the other marina personnel contacted owners, moved boats, added lines and chafe gear, put most of the boats in the boatel onto trailers so owners could haul them away, and secured marina property. The marina was ready, or so she thought. Fran blew all night and as morning dawned she got her first glimpse at what the storm had done: the harbor was empty. Boats, most still tied to their floating docks, had floated away. A few had sunk, but most were scattered ashore, piled awkwardly on top of each other in clumps, leaving only a few scattered pilings to indicate what had once been a marina.

Evaluating Your Marina: How Safe are the Docks?

Three years after Fran, Masonboro Boatyard is a much different marina, although the difference isn't readily apparent. The docks were rebuilt and the buildings repaired. The boats are back. On the surface it looks the same, but Susie Brigman didn't make the same mistake twice. When the floating docks were replaced, new pilings were driven far into the bottom that tower 18' above the water. The additional height looks slightly ungainly, but the docks are far less likely to be lifted over the pilings by a storm's deadly surge. Masonboro Boatyard is better prepared.

Low lying areas and seawalls are also vulnerable to storm surge. One facility that was especially hard hit by a hurricane was the Houston Yacht Club, which lost 141 of its member's boats in hurricane Alicia. For many years, the boats at the Houston Yacht Club had been protected by an 11' high x 20' wide earth and cement seawall. Then in 1983 the club expanded the number of slips by constructing a wood seawall further out from the older seawall.

When hurricane Alicia came ashore with 135 mph winds, Galveston Bay quickly rose over the new outer seawall and, one by one, the windward boats nearest he submerged seawall broke their lines in the heavy seas and smashed against the boats to leeward. Only a few of the boats behind the taller inner seawall came loose.

A study by MIT after hurricane Gloria found that boats stored ashore were far less likely to have been wrecked than boats stored in the water. The problem at many marinas is that hauling and blocking boats ashore takes time, which is in short supply once a hurricane warning is posted. Another problem is storm surge and the height of the marina storage facility.

Shortly before hurricane Fran came ashore, John Parker, a BoatUS Member in Wilmington, North Carolina, was assured by his marina manager that his sailboat would be hauled out and blocked ashore. John stripped his boat and then moved it over to the bulkhead next to the travel lift. Since the boat was going to be hauled, he didn't add extra lines and chafe gear. In the ensuing chaos that proceeded the last few hours before the storm, John's boat was overlooked. When storm came ashore, the boat was carried up and over the seawall and destroyed.

The time problem can be solved, at least partially, by careful planning. One of the first things Philip Hale did after Bob battered his marina, Martha's Vineyard Shipyard on Martha's Vineyard, was put together a list of emergency employees, including many former employees and some local boat owners who are familiar with the boats and boatyard. This emergency staff is organized into teams, each having a specific assignment and leader, who can be called upon to join the regular staff whenever a large storm is approaching. Hale's largest team is assigned to haul, block, and prepare the boats; there are other teams to secure the buildings and grounds.

At another New England marina, Burr Brothers in Marion, Massachusetts, was also hit hard by Bob as well as an earlier hurricane, Gloria in 1985. Toby Burr now keeps a list of boat owners who have agreed to have their boats hauled by the marina whenever a hurricane threatens. The decision to haul boats is left to marina personnel, and Toby says it puts an extra burden on them to decide at what point a storm might pose a threat. The responsibility is more than offset, however, by the additional time it gives them to evacuate boats.

While almost all of the boats hauled by Burr Brothers when the marina was hit by Hurricane Gloria escaped with relatively little damage, boats that were stored ashore during Hurricane Bob were not so fortunate. Unlike Gloria, which came ashore at low tide, Bob had a much greater surge and many of the boats stored in the yard got knocked off their cradles by the rising water. To prevent a recurrence of the damage done by the surge, Burr Brothers has arranged to receive NOAA charts that predict when and where the surge is likely to be highest. If the surge predicted could be a threat to boats stored ashore, Burr Brothers has a contingency plan to unstep masts so that boats can be moved further inland to higher ground.

Other low-lying marinas have opted to recommend that boat owners seek higher ground elsewhere. Ashley Marina in South Carolina, doesn't have the facilities to haul boats, and even if it did, the grounds are too close to sea level to offer even minimal protection from tidal surge. Rhodes recommends boat owners take boats to nearby Ross Marina, which has a travellift and a storage areas that is a much safer 15' above sea level. David Browder at Ross acknowledges that many of his regular customers have already made arrangements to have their boats hauled and stored at his yard whenever a storm threatens.

After boats in its outer harbor were devastated by Hurricane Alicia, the Houston Yacht Club responded by devising a comprehensive Hurricane Plan, which includes evacuating ALL of the boats in the outer harbor whenever a hurricane warning is posted. This massive job requires an enormous commitment by all of the club's members, each of whom is required to submit a hurricane plan with their harbor rental agreement.

Owners are required to make arrangements to move boats to hurricane holes or alternative dock sites further inland. Each plan must include details on where the boat will be kept, what equipment is available, and the name of a "boat buddy" who will take care of the boat if the member is sick or out of town. Plans are submitted to the club's Hurricane Committee for approval.

Plans must conform to the overall guidelines set by the club. For example, boats in the outer harbor have to be evacuated, and arrangements must be made to move them to hurricane holes and alternative dock sites further inland. In the event of a storm, boat owners report to one of the 14 dock captains, who coordinate the preparation efforts at each of the club's docks.

While the Houston Yacht Club Plan has been used as a model by many other yacht clubs and marinas, it is important to note that there is no such thing as a generic hurricane plan--a plan that will work for everyone. Each facility is different and arriving at a viable plan takes time. Should a hurricane come ashore, an extraordinary amount of work will have to be done in only a few hours. Planning should begin months in advance.

If you plan to leave your boat at a floating dock, it's critical that you measure the height of the pilings--will they remain above the predicted storm surge? A fixed dock presents an even greater problem. With a fixed dock, a boat must have sufficient scope to allow for storm surge, Lines that are too short will be stressed and broken by the surge. On the other hand, simply increasing scope to existing pilings typically results in too much slack--the boat will be slammed against the pilings--when the storm first comes ashore.

The remedy is to secure longer lines to more distant pilings or even trees. The larger the slip, the better. This allows the boat to rise without greatly increasing the risk that it will be destroyed against pilings. If lines can't be extended to allow for surge, or if a slip is only marginally larger than the boat, the only safe alternative is to move the boat to a hurricane hole or have it hauled and stored ashore.

Securing a Boat Before a Hurricane: In Florida, It's the Law!

One type of hurricane plan devised by some marina owners in Florida has been to kick boats out whenever a hurricane warning is posted. This "plan" was good for marina docks and buildings but not so good for the displaced boats. And it was definitely not good for the boat owners, who would have to risk their lives moving boats in the face of rising winds and seas.

After hurricane Andrew, a law was passed in Florida that prohibited marina owners from ordering boats to leave the marina after a hurricane warning is posted. Marina owners responded by altering language in slip contracts to say that boat owners were liable for damage to the marinas if boats left in their slips during hurricanes. "Your boat can stay, but…"

Last spring, a Florida appellate court failed to support a marina owner's damage claim against several boat owners who left their boats at his marina during hurricane Opal. The judge said, however, that a marina can hold a boat owner liable if his or her boat isn't secured properly.

"Secured properly" isn't defined, so it behooves a boat owner to take extra steps--the more the better--to secure a boat when a hurricane is approaching. This means adding extra lines, chafe protection, and stripping the boat.

What About Hurricane Plans?

How Some Marinas are Dealing with the Problems of Storm Surge, Hauling Boats, Exposed Locations.

When hurricane Fran came blasting across North Carolina's Outer Banks in October 1996 and up Masonboro Sound, Susie Brigman said she'd never seen anything like it. In her 26 years at Masonboro Boatyard, Susie had seen several hurricanes, but this category three storm was something altogether different.

Before the storm, she and the other marina personnel contacted owners, moved boats, added lines and chafe gear, put most of the boats in the boatel onto trailers so owners could haul them away, and secured marina property. The marina was ready, or so she thought. Fran blew all night and as morning dawned she got her first glimpse at what the storm had done: the harbor was empty. Boats, most still tied to their floating docks, had floated away. A few had sunk, but most were scattered ashore, piled awkwardly on top of each other in clumps, leaving only a few scattered pilings to indicate what had once been a marina.