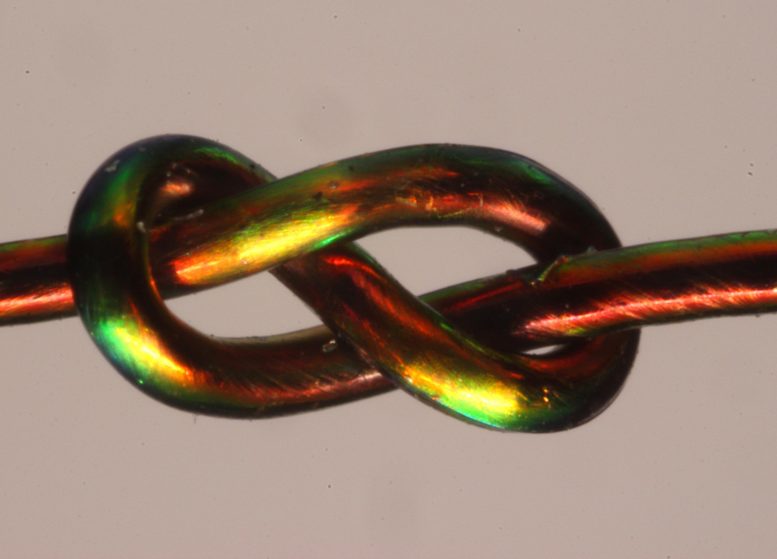 If someone asked you what the strongest knot is, you might say the bowline or square knot. You probably know that a reef knot is stronger than a granny knot even though they’re very similar. But do you know why? If you could see inside a knot and know the forces it’s under, you could more accurately predict how well it would hold.

Mathematicians use knot theory models to try to explain the stresses a knot is subject to. Recently, MIT researchers developed a new model that looks at things like how the fibers twist when under load and how often the line crosses itself. But the computer model couldn’t take into consideration things like how soft the line is and how that changes its stability. So when other researchers developed stretchable fibers that change color depending on how much they’re strained, a new way to look at knot strength was born.

When the researchers got together, they were able to use the computer models along with the fibers to test the strength of various knots and find out exactly why one was stronger than another. One of the models they used described the behavior of spaghetti as it was pulled, which showed each strand as a chain of small, discrete, spring-connected beads and how they interact when pulled. But the new fibers were the key: As strain is increased, they change color, especially where the line had the most stress, which can indicate a failure point. When they combined the models with the fibers, they found a huge increase in accuracy of the models.

Fortunately, one of the inventers of the fibers is an avid sailor, and the group set out to test some sailing and rock-climbing knots to see where the greatest strains are. The team began testing knots, from simple ones like the reef to more complicated ones, such as the carrick bend. Using the fibers, they looked at things like the direction each segment of a strand rotates as a knot is tightened. They found that if a knot has more strand crossings, it’s stronger. More changes in the directions of rotation from one strand to another also signified more strength. This last one is important; if a fiber segment is rotated to the left at one crossing and rotated to the right at a neighboring crossing as a knot is pulled tight, this creates a twist fluctuation and opposing friction, which adds stability to a knot. But if the segment is rotated in the same direction at two neighboring crossings, there is no twist fluctuation and the strand is more likely to rotate and slip, producing a weaker knot.

Now you know why a reef knot is stronger than a granny knot; while they look very similar, the reef knot has more twist areas, making it more stable. Visit the MIT News Page to read more on how the research identifies the best knots.