BoatUS leverages our political effectiveness by strategic partnering with like-minded groups that share our goal of looking out for your interests. 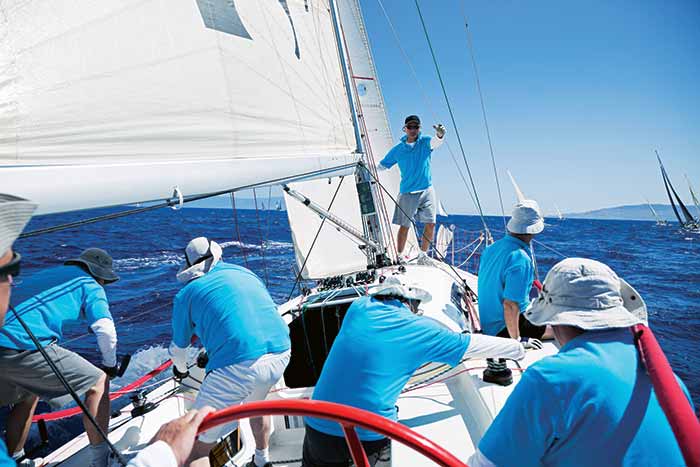 Coalitions rely on teamwork, much like a well-honed crew. (Photo: Getty Images/Travenian)

In the world of politics, the more people you represent, the easier it is to get the ear of policy decision-makers. To strengthen and unify the voice of recreational boating, BoatUS Government Affairs often joins forces with other influential groups, including government and industry organizations. Not all are strictly boating-related and some of them may surprise you, but they all help us help you, our members. Here is a rundown on the coalitions with which we regularly work and what they do.

Fishing and boating go together: 83% of active anglers are also active boaters. We partner with the Angling & Boating Alliance (ABA), which is an ad hoc coalition of more than a dozen national recreational boating, angling, outdoor recreation interests, conservation groups, and state boating safety and natural resources agencies committed to the sustainable future of the Sport Fish Restoration & Boating Trust Fund. Its goal is to protect the Trust Fund, perhaps the most valuable legislation for anglers and boaters, lead a national advocacy effort for the fund's reauthorization as part of the massive Federal Highway Bill, and communicate the importance of the fund to the administration.

BoatUS is heavily involved in making sure the bill is reauthorized in 2020 and in making sure boaters are not neglected. As boaters and anglers, you pay into this fund with a 3% tax on electric motors; import duties on tackle, pleasure boats and yachts; a motorboat fuel tax; and a small engine fuel tax. "BoatUS, along with ABA, wants to make sure that the money from the fund stays intact for the intended use: saving lives, keeping our fish stocks healthy, and making it easier to enjoy the water," says David Kennedy, our BoatUS Government Affairs manager.

Agriculture, aviation, construction, transportation, first responders, surveying and mapping, and auto manufacturers also depend on the Global Positioning System (GPS). But it's hard to overestimate its importance to our sport; nearly every boater has a GPS, which is why we're involved with the GPS Innovation Alliance. It's a coalition that recognizes the ever-increasing importance of GPS and other global navigation satellite system technologies to the global economy and infrastructure. The GPS Innovation Alliance informs policymakers and GPS users about the centrality of GPS in our nation's economy, and so it's an obvious coalition partner for us.

What do motorcyclists, snowmobilers, and landscapers have in common with boaters?

Eighteen outdoor industry associations, coalitions, and nonprofits joined forces to create the Outdoor Recreation Roundtable (ORR), pledging to work together for the benefit of American outdoor recreation as a whole. These industries include such diverse interests as the American Horse Council, the Motorcycle Industry Council, and of course BoatUS, as well as others that represent thousands of U.S. businesses that produce and provide equipment, gear, apparel, vehicles, and services for the 142 million Americans who enjoy our nation's parks, waterways, and byways. Spanning outdoor recreational activities such as boating, fishing, hunting, camping, archery, trail sports, snow sports, and powersports, ORR is dedicated to growing diverse outdoor participation, expanding recreational access for Americans, and promoting conservation.

What do motorcyclists, snowmobilers, and landscapers have in common with boaters? When it comes to safe fuel, plenty. If you've ever had a problem with ethanol or know another boater who suffers from this unfortunate additive to gasoline, you'll understand why we're involved in a coalition that seeks to fix the Renewable Fuel Standard, the regulation that requires ever more ethanol in gasoline.

Most gas now contains up to 10% ethanol, and recently the Environmental Protection Agency has allowed gas with 15% ethanol to be sold at auto gas stations — precisely where many trailerboaters refuel. Gas with 15% ethanol can damage boat engines and void warranties, and it's well known that ethanol creates problems in modern boat engines and fuel systems. BoatUS works closely with this group to ensure whatever fuel you put into your boat is safe.

For years, the Atlantic Intracoastal Waterway (ICW), the ­celebrated 1,100-plus mile coastal waterway stretching from Norfolk, Virginia, to Miami, Florida, has been getting "thin." Shoaling has created hazardous conditions in some areas with depths of less than 5 feet reported, which reflects a remarkable 7 feet of water depth lost in the waterway's authorized minimum depth of 12 feet.

BoatUS is a charter member of the Atlantic Intracoastal Waterway Association (AIWA), which advocates for a modern, efficient, and well-maintained system of inland waterways. The group is comprised of representatives from commercial shipping, dredging companies, and local governments. BoatUS has long had concerns about boaters potentially forced to take more hazardous offshore routes due to ICW shoaling. BoatUS's David Kennedy was recently elected chairman of AIWA and brings the voice of the recreational boater to the table.

"The waterway is a critical U.S. infrastructure and important to recreational boaters," says Kennedy. "We vigorously support efforts to improve navigation and waterway access."

We've written about caucuses before for good reason (visit "In Search Of Common Ground Through Boating Caucuses" to read about them). Caucuses are informal bicameral and bipartisan groups of senators and representatives that advocate for a common interest. Boaters are fortunate that there are a number of caucuses that support boating activities, including the Congressional Sportsmen's Caucus, the largest of all caucuses on Capitol Hill.

We'e able to partner with other boating and angling groups in part because they know the power of having our 670,000 BoatUS Members behind us.

The bipartisan Congressional Sportsmen's Foundation, along with BoatUS, supports and advises these caucuses as well as federal agencies and other federal policymakers and provides them with information to advance the interests of boaters and anglers, such as the recently passed Modernizing Recreational Fisheries Management Act, also known as the Modern Fish Act. BoatUS's Kennedy says, "The act is a big step forward in recognizing the value of today's recreational anglers. What the act does for saltwater anglers is to update critical public policy to help ensure fisheries management and oversight also works for recreational anglers." If there is an organization that promotes sensible safe legislation for boating and recreational angling, you can bet that BoatUS is involved. To learn more about what we're working on, visit our Government Affairs site.