Ports and harbors around the country have been authorized to get needed dredging and infrastructure improvements. The money is there. The problem lies in appropriation. 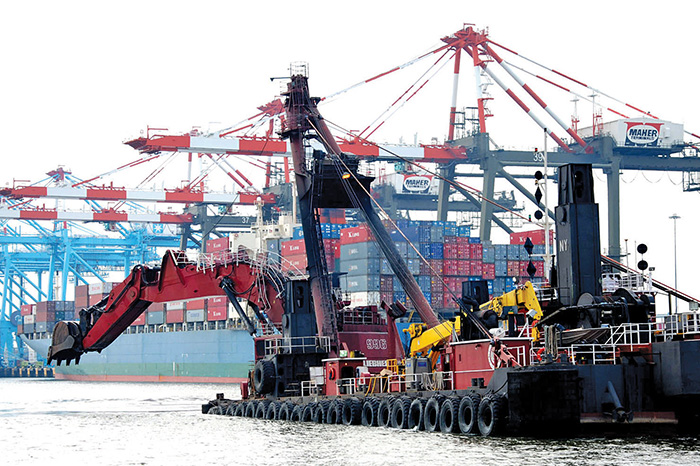 Imagine you left your neighborhood to get onto the local highway only to find out the entrance ramp had become too narrow for your car. And all the trucks that move industry into and out of your town could no longer squeak by on the exit ramp. Worse, imagine if emergency services couldn't get onto the highway because of that too-narrow access. To bring the metaphor home, that's what many ports and harbors across the country experience when entrances become too shallow. Boats sometimes can't get in or out safely, or even at all.

What Should A Boater Do At Bars Or Inlets?

It's always a good idea to call your local TowBoatUS operator over the VHF to ask if there are changes to depth in any questionable bars or inlets you're about to attempt. Though BoatUS towers are not infallible, they are helpful and know a great deal about local conditions.

Many ports are situated on a river, and during the change of tides and higher river water flows, sediment builds up as the downstream river water meets ocean waves. When the resulting "bar" or shallow area doesn't have enough depth, boats frequently can't get through, and often the bar causes much rougher water, making it dangerous to cross. Even U.S. Coast Guard rescue boats frequently can't cross the bars in stormy weather, just when they might be needed most.

Most harbors are not naturally deep and need consistent dredging to keep them open for shipping, fishing, and recreational use. For the most part, the U.S. Army Corps of Engineers (USACE) is responsible for dredging harbors, from small ports like Newport, Oregon; and Moriches, New York, to large ones, such as San Diego and Baltimore harbors. USACE is also responsible for maintaining and improving nearly 12,000 miles of shallow draft inland and intracoastal waters (such as the Intracoastal Waterway) and more than 400 ports and harbors. But there are many places that are still waiting for consistent dredging and risk eventually being all but unusable.

Rick Goche, port commissioner in Brandon, Oregon, explains, "Small ports around the country have to fight like heck for funding that will allow the Army Corps of Engineers to do its job. The real shame is that it doesn't have to be this way." The reason has to do with how money is collected and spent.

Dredging is USACE's largest individual budget item. But budgets are one thing; spending the money is quite another. Most USACE dredging projects require not just congressional authorization but also congressional appropriation. Authorization can happen years before funds are actually available. Here's how: Much of the funding for dredging comes from the Harbor Maintenance Tax (HMT), something that we all pay indirectly in order to get our products shipped by sea. The money goes into the Harbor Maintenance Trust Fund while it's waiting to be doled out. Right now, nearly $10 billion is in the fund, sitting idle.

"The good news is that we do have a revenue source to maintain our harbors," says Rep. Peter DeFazio (D-Ore.), Chairman of the House Committee on Transportation and Infrastructure. "The bad news is that Congress has frequently underspent the collected taxes."

Commenting on the delays, Rep. Bruce Westerman (R-Ark.) says, "For too long, more tax revenues have been collected annually than Congress has appropriated. It's critical that as we work to address our infrastructure challenges in the Congress that ports, harbors, and inland waterways are not left behind." Fortunately, a new bipartisan bill (H.R. 2440) supported by BoatUS will make it easier for Congress to appropriate funds needed for previously authorized waterway maintenance.

BoatUS is working with lawmakers on Capitol Hill to help pass the bill. There appears to be broad support from both sides of the aisle. The legislation enables the expenditure of approximately $34 billion over the next decade, allowing USACE to dredge all federal harbors to their constructed depths. While much of the money will go to larger ports across the country, there is a provision in the bill to help local areas as well. "For small harbors, it's absolutely the lifeblood," says DeFazio. These shallow-draft harbors support local economies and give recreational boaters access to the water.

"We're happy that Congress understands that these waterways are crucial to the nation's economic health as well as the safety of boaters," says David Kennedy, Manager of Government Affairs for BoatUS "The passage of H.R 2440 would ensure that large and small harbors get their fair share of dredge and infrastructure funding so both commercial and recreational boaters don't have to fear entering or leaving dangerous shoaling harbors."

BoatUS, the voice of recreational boaters on Capitol Hill, is the only national boat-owner organization with a full-time Government Affairs staff. Visit Advocacy.BoatUS.com to stay informed on relevant federal and state boating issues, and sign up to receive Action Alerts emails so you can take action when important legislative issues affecting boaters arise.