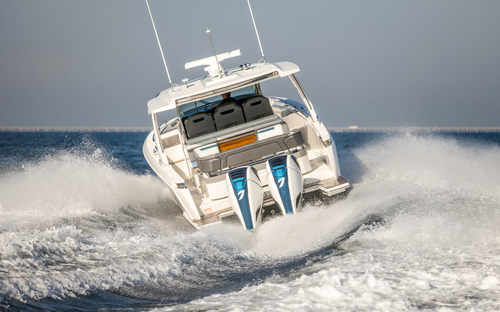 The trend of integration and innovation on new boats continued unabated at the 2019 Miami International Boat Show with a helm-to-prop system and plenty of big, bad engine power. What's clear is that outboards are now the clear favorite over inboard propulsion. Once only found on sailboats and small powerboats, today, outboards are powering 65-foot, 30,000-pound vessels.

"It takes big power to move those boats, so builders request more powerful outboards to move them," explains David Meeler, manager of product planning and information for Yamaha Marine. 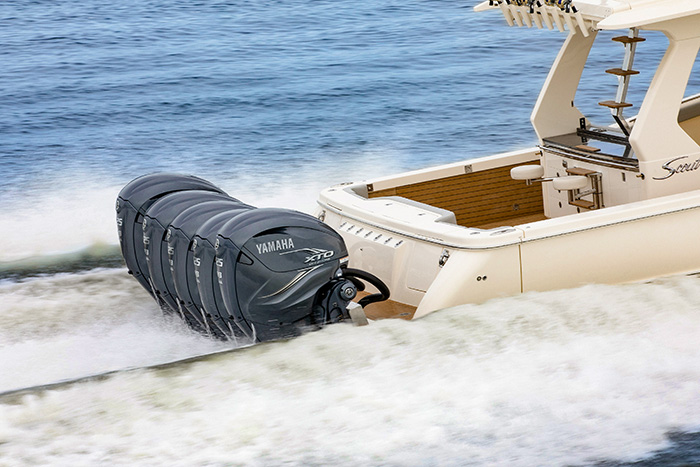 If you were impressed by four outboards on a boat, new technology is enabling five- and six-engine configurations. | Photo Credit: Yamaha Marine

"They're big on power but also with awesome control features like Helm Master that use advanced technology to make handling these boats easier," Meeler says. Helm Master is Yamaha's fully-integrated boat-control system with joystick piloting. With all the control, why not more power? This summer, Yamaha will offer the XTO Offshore outboard in a quintuplet – that's five engines! – configuration.

"Helm Master uses an electronic helm to signal the electric steering system on the XTO," Meeler says. "It's a direct electrical link that doesn't require any connection to a pump or hydraulics, just a very powerful electric motor connected directly to the XTO."

Not to be outdone, competitor Mercury Marine has come out with electronic controls making the operation of five- and even six-engine boats easier and more precise. The technology package features Digital Throttle and Shift (DTS) controls, heading and route features of electronic steering, Active Trim, and Mercury's Joystick Piloting for Outboards technology. 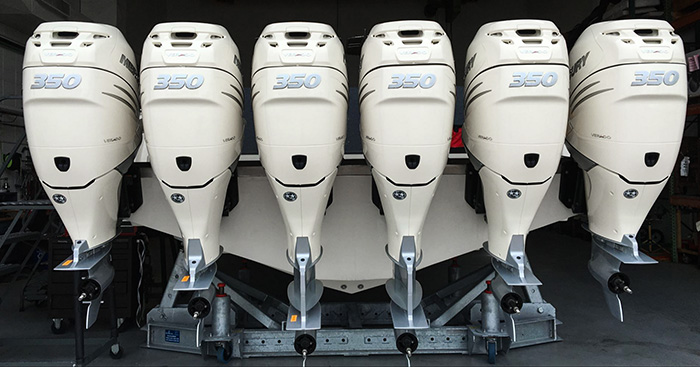 If you were impressed by four outboards on a boat, new technology is enabling five- and six-engine configurations. | Photo Credit: Mercury Marine

"To match or exceed what we've already been doing with two- to four-engine arrays required significant research and software programming to maximize the contribution of each engine in various maneuvers and throttle settings," explains Kris Neff, vice president of global category management and strategic planning for Mercury.

Mounted on the back of the new Scout 530 LXF luxury center-console introduced at the Miami Boat Show were six 400-hp Mercury outboards. The boat can top 60 mph, if that's what you're into, but at a price: The whole package costs $2 million.

Mercury has also introduced a 400-hp Verado outboard for pleasure boats. The supercharged engine is rated for a maximum of 6,800 rpm but weighs a relatively light 668 pounds. MSRP is $34,135. 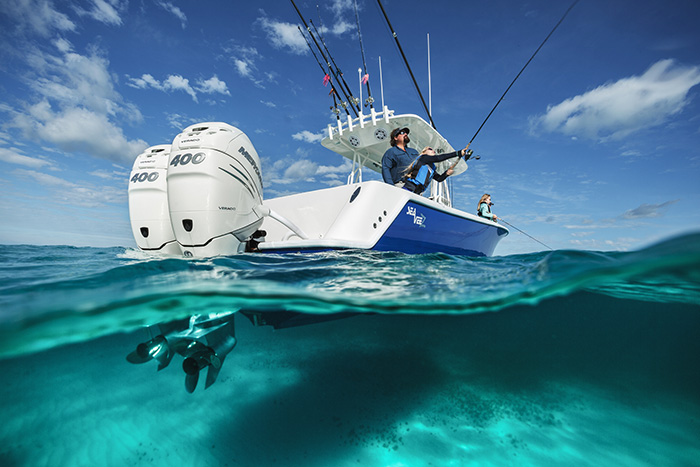 When it comes to outboard horsepower, the reigning heavyweight champ is Seven Marine, which made waves in 2011 when it introduced a 557-hp outboard. In 2015, Seven topped itself with a 627-hp outboard, which is about the height of an average human.

For inboard fans, Indmar has engineered the world's first "EcoBoost" marine engine. Ford introduced EcoBoost technology for its vehicles in 2011, and it's used across its Ford and Lincoln lines. EcoBoost engines are designed to optimize power and efficiency using turbocharging, direct gasoline injection, and variable cam timing. 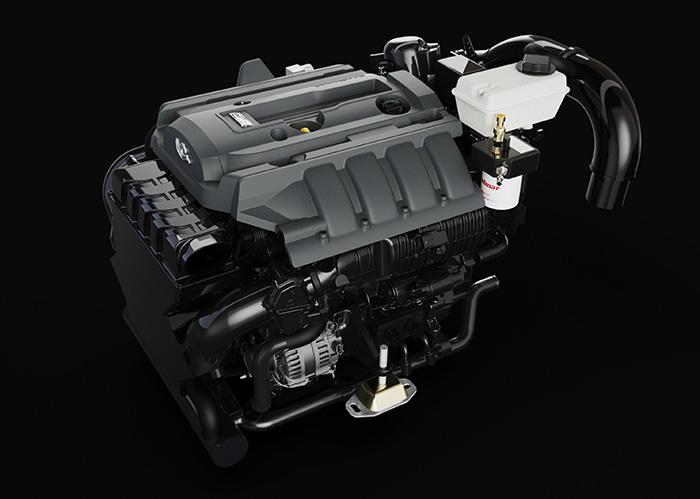 Indmar has marinized the four-cylinder engine into a 2.3-liter turbocharged inboard the manufacturer claims delivers the highest power density available from an inboard marine engine. The compact power plant produces 310 hp with 350-pound-feet of torque, perfect for ski, wake, and surf boats.

Indmar also introduced its EcoJet jet drive to couple with the EcoBoost engine. Look for both products already built into new ski boats.