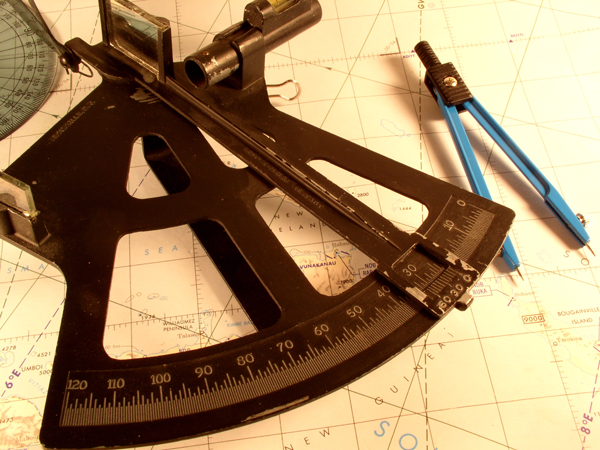 Except aboard the shallowest of craft, venturing beyond narrow or familiar waters means you need a chart. If you are not acquainted with charts, they can look intimidating, but their mystery cannot survive 10 minutes of study. To learn about charts, buy one for the waters you want to navigate. The chart seller can tell you which one you need.

Don't Ask For A Map

By convention a map showing coastlines, water depths, and other information of use to navigators is always called a chart. Calling it a map is like calling the bow the pointy end.

When you are buying a chart of specific waters, you typically have a choice between a chart that covers a smaller area in greater detail or one that covers a larger area in less detail. The scale of a harbor chart, for example, might be 1:20,000, meaning that 1" on the chart represents 20,000" of the earth's surface, or about 0.27 nautical miles. That makes a mile on the water a little less than 4" on the chart. Harbor charts will be very detailed.

Small-craft charts come folded like a road map for more convenient use on smaller boats. The scale of small-craft charts is often 1:40,000, so a nautical mile is about 1.8" on this scale chart.

The scale designation on charts is a fraction (1/40,000), so the larger the number after the colon (or slash), the larger the area the chart shows, but the smaller the scale. So-called coastal charts, for example, typically use a 1:80,000 scale. That makes a nautical mile less than an inch, and lets a single chart cover a 30 mile by 40 mile area, but with less detail than a large-scale chart. General charts with scales as small as 1:1,200,000 cover huge areas — 600 miles or more — but with little detail. Such small scale charts are useful primarily for route planning.

Numbers printed on the water areas of the chart indicate the depth of the water at that spot. However, a 2 on the chart might mean two feet, two fathoms, or two meters. It is essential to know which unit of measurement is used. This is always shown on the face of the chart in large print — SOUNDINGS IN FATHOMS AND FEET, for example. A fathom, by the way, is six feet, so on a chart with soundings in fathoms, a number such as 03 means zero fathoms and three feet. The water at this spot is three feet deep at MLLW. A sounding of 55 would be 35 feet (five fathoms and five feet). In 1992 U.S. charts began switching from feet and fathoms to soundings in meters. If your brain hasn't made that switch, you can divide soundings in meters by 0.3 to get the approximate depth in feet.

The soundings printed on the chart normally represent the depth at mean lower low water (MLLW), so the actual depth is usually more than the charted depth. However, when the tide table shows a negative low-tide entry, actual depths will be less than the chart indicates. When the depth of the water is a concern, you will need to know the height of the tide.

In addition to water depths — including the shoreline — charts show the location of rocks, reefs, wrecks and other submerged obstructions, anchorages, channels, lighthouses, buoys, and even tide rips. The symbols and abbreviations for these features are often obvious but sometimes less so. All are illustrated and explained in NOS Chart No. 1: Symbols, Abbreviations and Terms, which isn't a chart at all, but a booklet. It used to cost about two bucks from the government, but today a hard copy, available only from a commercial vendor, will set you back about $10. Or you can download an electronic copy to your computer for free from NOAA. Either way, reading through Chart No. 1 will reveal new and useful details that charts often include.

Red daybeacons are shown on your chart as small triangles. The green ones — any color but red, actually — appear as small squares. Lighted markers have a magenta flare symbol — like an exclamation mark. A variety of symbols are used for buoys. Lighthouses are generally shown as a dot inside a magenta disk, sometimes with the flare symbol. All are illustrated in Chart No. 1.

Prominent land features, such as towers, buildings, and even hills may also be shown on the chart if they might be valuable to the navigator. Many older charts also include Loran-C time distance lines.

At various locations on the chart you will find groups of three concentric circles of ruler-like hatch marks. This is called a compass rose, and it indicates true north — the outer circle — and magnetic north — the inner circles. Since you are almost certain to be steering by magnetic compass, you will nearly always use the inner circles, normally the one marked in degrees from 0 to 360.

The list of essential plotting tools is short. You need a sharp pencil, a pair of dividers, and a parallel rule.

To see how easy plotting is, draw a straight line between two points on your chart. Let's call them A and B. The parallel rule is a good straightedge. We want to know the direction and distance from A to B.

Begin by aligning one leg of the parallel rule along the A-to-B line. Holding that leg tightly against the chart to keep it from moving, move the other leg out until its outside edge is at the center of the small cross in the center of the nearest compass rose. If the ruler doesn't extend far enough in one motion, then press the moving leg of the rule tightly to the chart and bring the other leg to it. As long as you move only one leg at a time, holding the other down, you can "walk" your course across the chart. When the rule finally reaches the center of a compass rose, it will still be parallel to the original A-to-B course. Now where the edge of the rule crosses the magnetic compass rose is the magnetic course from A to B. This is the course you would steer, assuming no compass deviation and no current. Of course, where the rule crosses the opposite side of the compass rose is the course from B to A.

Measuring distance is even easier. Put one point of your dividers on point A and the other on point B. Now, without altering the spread of the dividers, move the tool straight to one side or the other of the chart and place the points on the latitude scale. Count the number of minutes between the points. One minute of latitude is equivalent to one nautical mile. You can also place your dividers on the distance graph printed on the chart, but the latitude scale is usually more convenient.

If the distance between A and B is wider than your dividers will spread, then set the dividers to some convenient distance — say five miles — using the latitude scale. Starting at point A, walk the dividers along the course line. In other words, rotate the dividers on the forward point to move the back point from five miles behind to five miles forward. Continue this until the forward point is beyond B, then squeeze the dividers to place the point on B. Read this last divider spread from the latitude scale and add it to the miles already accumulated five at a time. If you stepped off five miles three times, with the remaining distance measured at 3.5 miles, the distance from A to B is 18.5 miles.

If you are thinking you do not need to know any of this because you have a GPS chartplotter aboard, you are wrong. Lots of things can disable electronic navigation, many of which will be out of your control. The more you understand about navigation, the more comfortable you are likely to feel on the water and the safer you and your guests and crew will be. Comprehensive navigation texts run to 1,500 pages or more, but having a paper chart aboard and knowing just this much about how to use it can get you there and back without electronic guidance. It is a valuable hold card.

For a more complete understanding of charts and navigation, I recommend Boat Navigation for the Rest of Us by Captain Bill Brogdon.

Don Casey has been one of the most consulted experts on boat care and upgrades for 30 years, and is one of the BoatUS Magazine's panel of experts. He and his wife cruise aboard their 30-footer part of the year in the eastern Caribbean. His books include Don Casey's Complete Illustrated Sailboat Maintenance Manual, and the recently updated This Old Boat, the bible for do-it-yourself boaters.