What To Expect From A Hurricane

Stay safe on the water with storm tracking and tides at your fingertips with the BoatUS App.

Preparing a boat for a hurricane means defending against wind, rain, waves, and high water — all in proportions rarely experienced by boaters

First On The Scene

Created way back in 1983 after Hurricane Alicia devastated much of the Texas Gulf Coast, the BoatUS Catastrophe Team was formed to help our insureds get their boats salvaged and their claims processed as quickly as possible. In the 36 years since then, this boots-on-the-ground crew has grown to include as many as 50 professional surveyors, claims processors, transportation providers, and professional TowBoatUS towers and salvage experts. As soon as a hurricane area is accessible, the CAT Team is typically the first marine insurance representatives to arrive and they quickly get to work assessing salvage needs and damages to our insureds’ boats, working to promptly settle claims. Much of their time is spent arranging for cranes and other equipment to salvage damaged boats.

Says our CAT Team field operations manager, Mike McCook, “Generally speaking, if you can find a difficult predicament, we have a boat there.”

With so much time in the trenches, CAT Team members have become experts on what works and what doesn’t when it comes to securing a boat for a hurricane. We’ve drawn on their extensive knowledge here to help you prepare your boat so it has the best chances of surviving a storm.

The damaging influence of high water, or storm surge, is often underestimated in preparing a boat for a storm. Storm surge raises the water level far above normal high tide, cutting off roads, forcing evacuation, and lifting boats above their docks and pilings.

Surge accounts for major damage to boats because it puts docks and dockline arrangements underwater as the boat tries to float above. Surge is the result of several factors. Due to low barometric pressure, the ocean surface is drawn upward, forming a mound about 1 foot higher than the surrounding ocean. Large swells generated by the storm reach land first, while storm winds drive water toward the coast. As the storm makes landfall, water levels 10 to 20 feet above normal high tide are possible. In 2005, Hurricane Katrina generated a surge of nearly 28 feet in Pass Christian, Mississippi.

Surge is responsible for extensive flooding and much of the loss of life that accompanies a hurricane. Dangerously high water can reach outward 20 to 50 miles from the storm's center. Surge makes extra length and positioning of docklines critical. 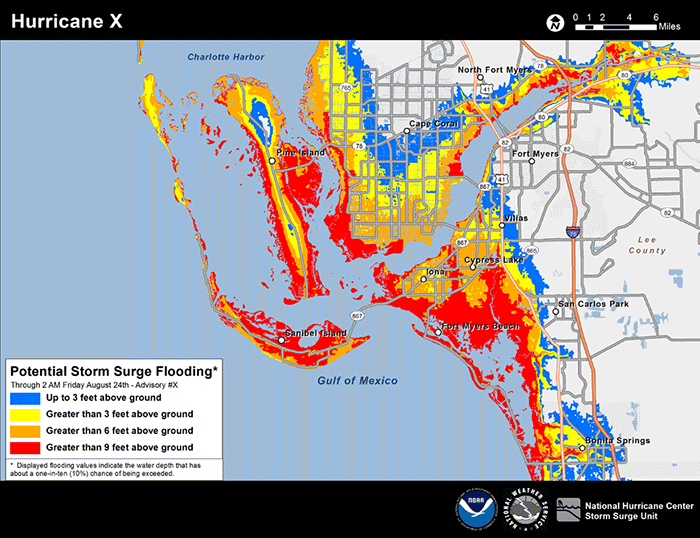 Storm surge is often underestimated and one of the factors that determines how you need to prep your boat.

A hurricane, of course, brings high winds. Wind speeds of 70 to 130 mph are common, and much higher speeds have been recorded. In 2018, Hurricane Michael had the strongest sustained winds (155 mph) of any hurricane to hit the U.S. when it battered Florida. What may be less understood is the force created by such winds. When wind speed doubles, the wind pressure quadruples. To put it in practical terms, when the wind speed increases, the damage it causes increases at a much greater rate. This illustrates the importance of reducing the boat's windage, which is the amount of area your boat presents to the wind, by removing as much rigging, canvas, and deck gear as possible, and facing the bow toward the greatest exposure.

Waves in the ocean have tremendous energy and can reach mountainous heights. But even in relatively small harbors, bays, and lakes, waves can build to surprising heights. In a hurricane, it is not unusual for steep, breaking waves 3 to 6 feet high to pound normally peaceful harbors. Seawalls, barrier beaches, and other structures that normally protect docks and moorings are often submerged by the storm surge. This has the effect of greatly extending the “fetch,” or distance, over which the wind can generate waves.

Rainfall of 6 to 12 inches within 24 hours is normal during a hurricane, with well over of 24 inches having been recorded. In 1979, Hurricane Claudette caused massive flooding in southeast Texas after dropping 42 inches of rain in just 24 hours. The all-time record, though, was Hurricane Harvey in 2017, which totaled a record 60 inches of rain, also in Texas.

Torrential rain can sink boats that are spared the worst high water and wind. Cockpit decks are seldom 100% watertight, and the ability of a bilge pump and battery to handle rain accumulation is often overestimated. Deck drains and pump discharges located near the waterline can backflow when waves and the weight of rainwater put drains underwater.

Tornadoes are sometimes spawned by hurricanes. In 2017, Hurricane Harvey created 54 tornadoes, and several people have died as the result of hurricane-spawned tornadoes. Little can be done to protect a boat from a tornado. The possibility of a twister, however, is a strong reason for you, your family, and your boat, if it is trailerable, to be far from the coast when a hurricane makes landfall.

U.S. Navy Admiral Chester W. Nimitz, who commanded allied air, land, and sea forces during World War II, said it best: "The time for taking all measures for a ship's safety is while still able to do so. Nothing is more dangerous than for a seaman to be grudging in taking precautions lest they turn out to have been unnecessary. Safety at sea for a thousand years has depended on exactly the opposite philosophy."

So prepare or move your boat when a hurricane is a substantial possibility, before a watch is even issued. If you wait longer and your plan includes relocating the boat, bridges may be locked down and the hurricane hole you choose may be inaccessible. Or if you plan to have your boat weather the storm ashore, you may find the marina is too busy to haul your boat.

A hurricane watch is posted when hurricane conditions pose a threat to a specified coastal area, usually within 48 hours. Waiting for a watch to be posted may be too late to head for the marina or to move the boat to a safer location.

A hurricane warning advisory is posted when sustained winds of 74 mph or higher are expected within 36 hours or fewer — too late in most situations to head for the boat. Securing the house, gathering emergency provisions, and evacuating the family will need attention at this point.