The skipper of a 35-foot sailboat is lucky to be alive after a 37-foot charter fishing boat struck his boat at speed. 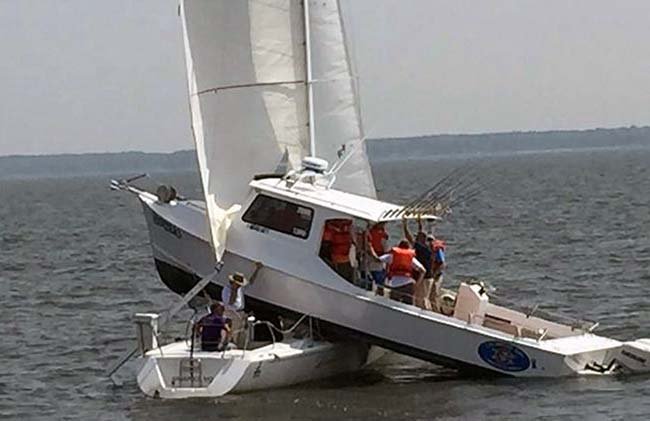 Amazingly, no one was seriously injured in this collision. (Photo: Maryland Department of Natural Resources)

If you subscribe to any online boating forums or social media, there's a good chance you came across a startling photograph of a powerboat sitting atop a sailboat. According to reports, a J/105 sailboat was involved in a collision with fishing boat on the Chesapeake Bay on August 17, 2018.

The sailboat Levitation, with skipper Michael Andorsky, a 74-year-old retired pediatrician, and a friend, were struck by The Hunter, a charter fishing vessel with seven people aboard. Somehow, no one was seriously hurt in the collision.

Andorsky told the local newspaper, the Capital Gazette, that even when the powerboat was "way off in the distance," he could see that they were probably on a collision course. "I'm waving at the guy, yelling, and all of a sudden, his boat was sitting on top of our boat," Andorsky told the newspaper. He believes that luck played a part, and surmised that had the powerboat stuck closer to the stern of the sailboat, where he and his friend were sitting, they would have most likely been killed.

The U.S. Coast Guard has taken over the investigation from the state marine police and has not determined which boat was at fault or whether alcohol or excessive speed were factors in the collision.

Weather reports indicated about 12 knots of breeze with conditions clear with approximately 10 miles of visibility at the time of the collision.

According to statements made by Andorsky, had the Levitation not been heeling to starboard when the powerboat stuck, the sailboat could have been cut in half. After the seven people were evacuated from the fishing boat, it reportedly slid back into the water. Both boats remained afloat after the incident and were towed back to port.

This collision, one of many that happen each year, is another stark reminder that keeping a proper lookout and understanding the rules of the road are important for all boaters.

Here's a quick refresher on the right of way rules.