There's more to solar power than just buying any old panel and connecting it. Let's find out what may be best for the way you use your boat. 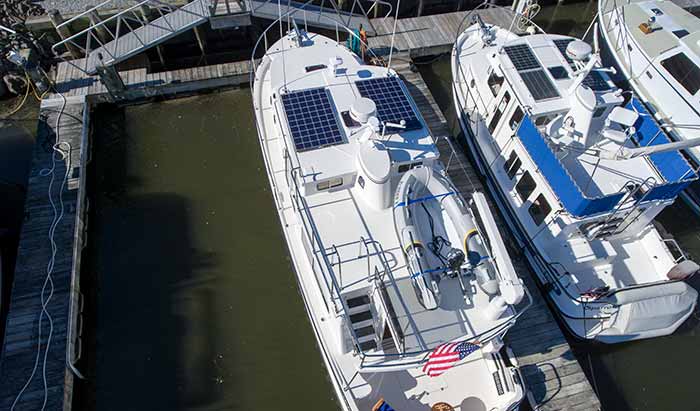 For a long time, overnighting on a mooring or anchoring anywhere away from shore power meant either doing without most of the comforts of electricity or relying heavily on a noisy diesel generator. Only by firing up the mini power plant to recharge the batteries could you have your electronics, lighting, and much more at your service.

Now, skippers of small boats often use solar panels as trickle chargers to maintain battery banks and electronics devices. This is particularly helpful, for example, if you are on a mooring, have power outages at the dock, or just want to keep your batteries up while fishing, hanging off the beach, or quietly drifting without using that outboard. Others use large banks of panels to supply most or all of the current for living aboard, even including running refrigeration powered by batteries. Regardless of how you want to use solar panels, solar-power efficiency has made significant strides in recent years, so it helps to understand some basics.

We've relied here on the expertise of Rob Warren of Coastal Climate Control. Different manufacturers, retailers, and installers may have varying opinions, techniques, and available brands of products. Also, technology is continuously developing. But our goal is to prepare you to ask the right questions, make good decisions, and get the most out of power from the sun.

There are three distinct types, each available with different kinds of silicon cells, according to Warren, whose Bowie, Maryland, company specializes in marine refrigeration, air-conditioning, and solar.

Monocrystalline cells have the highest efficiency rates because they're cut from a single crystal of the highest-grade silicon, have the longest life expectancy (more than 25 years), and require less space because of their efficiency.

Polycrystalline (or multicrystalline) cells, made from off-cuts and recycled silicon, are less durable and slightly less efficient; they tend to require more space. Both monocrystalline and polycrystalline cells are found in the familiar hard panels you see mounted on decks and pilothouse tops as well as in lightweight semiflexible and walk-on marine panels. Semiflexible panels with zippers or hook-and-loop fasteners added to them can be mounted in such canvas areas as biminis and dodgers, while walk-on panels can be secured directly to a deck or hard cabin top and absorb foot traffic. A good way to distinguish monocrystalline and polycrystalline solar panels is that polycrystalline solar cells look perfectly rectangular, with no rounded corners.

Amorphous solar panels are flexible "roll-up" panels named after the type of silicon used to manufacture them. These are the least efficient but most versatile.

Solar-panel efficiency is a measurement of how much solar irradiation the panel is able to convert to electricity. Each type has a different efficiency. While products constantly evolve, a general rule of thumb, according to Warren, is that efficiencies range from as low as 10 percent, for thin-film panels, to about 18 percent, for most polycrystalline panels, and to as high as 23 percent, for some monocrystalline panels that use more advanced technologies. This means that, for the size, the best, most-efficient panels can produce substantially more power than the least-efficient panels.

The Cost Of Clean Power

Of the three distinct formats of marine solar panels, the aluminum-framed glass panels are the least expensive, as they use a standardized construction process. The semiflexible and walk-on panels are highly specialized items made in small quantities, so they're more expensive. Genuine high-grade SunPower back-contact monocrystalline cells are currently the most efficient ones available and give a higher daily yield, but at a premium price. Amorphous panels are relatively inefficient panels and command a high dollar-per-watt price for their ability to be placed on rounded surfaces.

"There's a world of difference between true high-performance marine solar panels and those used on residential and commercial properties. Prices reflect that," Warren says. "While a small system designed just to stop a battery self-discharging will cost less than $300, a higher-capacity setup will cost in the thousands." 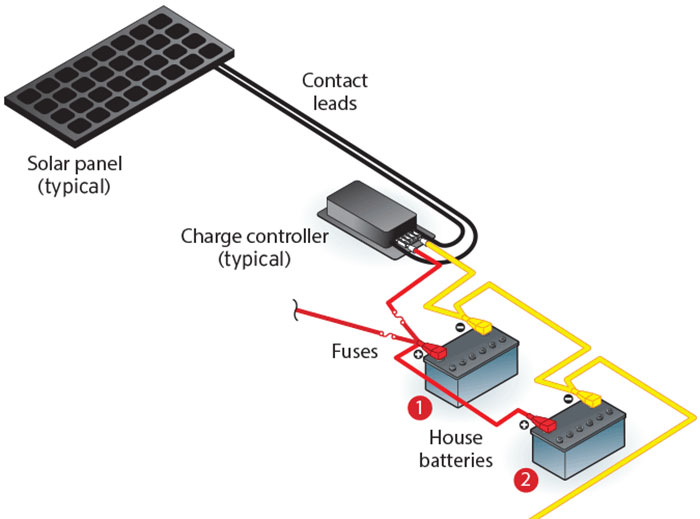 A good rule of thumb? Buy the most efficient panel you can afford. Many environmental conditions (fog, smog, clouds) can reduce the efficiency of solar panels, and if you start with a low-efficiency panel and experience less-than-perfect conditions, you may be unhappy with its performance.

Current output is determined by the quality of the available sunlight. Manufacturers provide efficiency ratings for their panels; be sure the numbers are derived following standard test conditions (STC), which represent the "ideal solar conditions" for maximum performance, so that you can accurately compare one panel to another.

When installing your solar panel, choose a place in a safe area (not where you'd drop a winch handle). Shading can dramatically lower the panel's efficiency, so find a broad, relatively flat area, such as on a cabin top or a fabricated mount, where the panel catches the most light most of the time. Installations that allow air to flow underneath will improve performance, but this isn't necessary or practical with the walk-on type.

Many boats use specially designed brackets because of the lack of space on deck and the presence of high structures that could cause shading as the boat swings or the sun moves. Some of the lightweight but high-efficiency semiflexible panels can be mounted onto canvas, such as a bimini or dodger. An example of this is the Solbian panel distributed by Coastal Climate Control. Warren recommends choosing a space where additional panels can be added later if your needs change.

The mounting hardware usually can be obtained from the panel supplier after you've decided where and how you want to mount the panel. It's important that the structure behind your mounting hardware is sturdy enough to survive stresses from mounting bolts or screws, plus the vibration and torsional/kinetic loads found on a moving vessel.

The closer the panel is to your batteries, the shorter the wiring run. Thinner wire is more easily routed both through pipes or tubes that support bimini tops or other structures as well as within the confined spaces of boats. But wire that's too thin will induce voltage drop and reduce charging efficiency. Follow instructions, and use the recommended type and size of wire.

Also, be certain to install the properly sized fuse close to the battery. Without a fuse, a short in the wiring is a dead short across the battery, with fire a potential consequence. Inevitably, you'll need to make a connection in the wiring run. Marine-grade butt-end connectors with heat-shrink covering are a good choice. I like to use an additional covering of properly applied Rescue Tape or good-quality electrical tape covered with a product such as 3M Scotchkote Electrical Coating. A good dielectric grease judiciously used at the connection points should help avoid corrosion later. Be sure to protect any wires that pass through areas that could cause chafe, such as bulkheads, and support them every 18 inches.

A solar panel needs to produce in excess of 15 volts to ensure adequate charging. But too high a voltage will damage a battery. Therefore, some form of voltage regulator is normally required. (Solar panels with a maximum output current of less than about 1 percent of battery capacity are said not to require regulation.)

Tip: Solar-cell voltage is reduced by heat. A panel up north may put out more voltage than the same panel in the Caribbean, even with the same amount and quality of light.

Nominal 12-volt panels will produce voltages of 18 volts and above at STC, but this will likely be reduced in hot climates. The additional 0.7-volt drop from a blocking diode, particularly when coupled with other variables, may then reduce the voltage to less-than-optimal levels below a practical charging level, and there may be times the panel is not actually charging your batteries.

Regulating the panel(s) to feed the batteries within proper parameters for good charging is achieved by using "controllers." Their purpose is to ensure that the battery receives an efficient and safe charge. A good controller can work on a mix of panels, some of which are in full sun and some of which are shaded, although the result will be a compromised power output mix of the shaded and unshaded panels.

There are less-expensive PWM (pulse width modulation) controllers and more efficient MPPT (maximum power point tracking) controllers that can increase output in low-light and partially shaded conditions by around 30 percent. According to Warren, the best solution for boats where some shading is unavoidable is one controller per panel when possible and practical. Plan for space to accommodate this need, especially if you think you may want to add panels in the future.

These controllers should normally be mounted close to the batteries because the better ones sense battery temperature (important for the charging rate) and also because distance from batteries means longer wire runs that can result in less-accurate sensing of true battery voltage.

Where The Sun Don't Shine

Shading may be "soft" (from light clouds) or "hard" (from the direct shadow of a nearby structure or an opaque object covering part of the panel). Any shading on any cell or part of a cell will reduce the power output of the panel proportionally to the amount of that shading. If a cell or group of cells is completely shaded, those cells will consume power from unshaded cells in the panel, possibly creating enough heat in the process to damage cells. Therefore, most marine panels will have bypass diodes built in to prevent this heat buildup. Bypass diodes, unlike blocking diodes, which will be discussed later, do not consume significant energy.

You may want to install more than one panel, and one controller per panel is ideal where shading is inevitable. When this is impractical or cost prohibitive, an array of separate panels should be installed in parallel, connecting positive to positive and negative to negative. Connecting the panels in this way on a boat that can get shady will prevent reduced output in one panel by shading on the other.

Even with panels connected in parallel, there is still the need to prevent one panel from sending power to another, which may become hard shaded. This can be achieved by installing blocking diodes between the panels; these are essentially electrical gates that allow current to flow in only one direction, but they lessen the voltage by as much as 0.7 volts.

Fun In The Sun

Your goal is to get what you want within your budget and to be satisfied with the end result. Start by finding a qualified specialist for marine installation of solar-power systems.

One of the top technical experts in the marine industry, Tom Neale, BoatUS Magazine Technical Editor, has won nine first-place awards from Boating Writers International, and is author of the magazine’s popular "Ask The Experts" column. His depth of technical knowledge comes from living aboard various boats with his family for more than 30 years, cruising far and wide, and essentially learning how to install, fix, and rebuild every system onboard himself. A lawyer by training, for most of his career Tom has been an editor and columnist at national magazines such as Cruising World, PassageMaker, and Soundings. He wrote the acclaimed memoir All In The Same Boat (McGraw Hill), as well as Chesapeake Bay Cruising Guide, Vol. 1. These days, Tom and his wife Mel enjoy cruising their 2006 Camano 41 Chez Nous with their grandchildren.