Get Connected With Wi-Fi Aboard

Should you install Wi-Fi on your boat? Yes — and here's why and how. 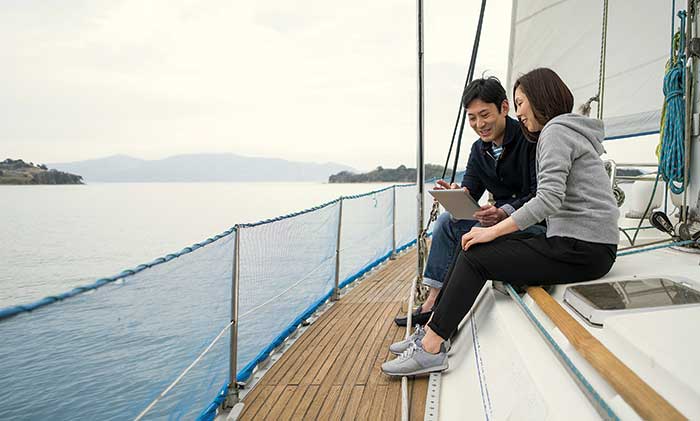 Wi-Fi has invaded just about every aspect of our lives. It's in our homes, our workplaces, and our cars. Now it's even showing up on our boats. But do we really need or want Wi-Fi aboard?

Despite the downsides of cost, complexity, and ceaseless badgering from the outside world, the answer for most of us is a resounding "Yes." Getting your boat connected has some huge advantages. The enhanced communications offers both convenience and security; the ability to communicate with the cloud allows for effortless marine-electronics software and cartography updates; and the ability to integrate your boat's brain with your phone or tablet makes for easier operation. With benefits like these, Wi-Fight it?

Before this conversation gets too confusing, we should differentiate between local Wi-Fi networks and those that connect to the rest of the world. Many marine Wi-Fi systems are essentially local network devices that simply integrate several devices on your boat, while others network your boat with the World Wide Web. Both have their own purposes.

Even if your boat can't communicate with the web while at sea, a local Wi-Fi network will allow you to integrate the devices on board it. For example, you could use your phone as a chartplotter repeater or to change the settings on your fishfinder. And some systems can be set up to operate both locally and in a broader context. Cartography updates, for example, can take place on your multifunction display (MFD) screen in real-time by tethering your plotter, fishfinder, and your Navionics app wirelessly. The data you've gathered can then be shared with the rest of the world when you return to port and get reconnected to the rest of the world.

What many of us are really after, of course, is the complete connection. Luckily, in this day and age, you can get one virtually anywhere on Earth. If, that is, you're willing to pay for it. The bottom line? The farther from civilization you get, the more it'll cost you.

In many cases, adding limited Wi-Fi to your boat can be as simple as upgrading your electronics system. Many new MFD units include built-in Wi-Fi and can easily turn your boat into an information hub. Even if your system is a year or two old, most major electronics manufacturers offer some form of black box or add-on that allows you to bring Wi-Fi into the mix. It may provide a bridge that allows connections with specific services, between devices on your boat, or with specific mobile apps; each offering needs to be carefully vetted to make sure it meets your personal needs.

Raymarine was the first major marine-electronics manufacturers to integrate Wi-Fi into its MFDs. It's built into all of the company's late-model series (going back to the 2011 release of the e7 and e7D models), and Raymarine also offers the Wi-Fish Wi-Fi add-on unit for use with smartphones and tablets on small, open boats.

"We first developed our own apps to utilize Wi-Fi," said Raymarine marketing manager James McGowan. "That allowed you to see and control your Raymarine MFD from your Apple or Android smartphone or tablet. And with the release of LightHouse 15 last year, we made the MFDs internet-aware. That gave them the ability to connect to Wi-Fi hotspots to check for software updates and update all of the connected Raymarine peripherals over the air. Radar, sonar, autopilots, instruments, VHF — all get their software levels checked and updated, if needed. Plus, our MFDs can now download worldwide GRIB weather files on demand. We've partnered with Precision Weather to make this possible, and you can request updated weather right from the MFD anytime you have an internet connection. That could come from a land-based or marina hotspot, the mobile hotspot in your smartphone, or from an onboard satellite internet connection."

Other manufacturers utilize Wi-Fi in different ways. Simrad offers its GoFree WIFI-1 module for about $200, which, while it isn't integrated with the MFD, offers plug-and-play installation and brings Wi-Fi to your helm. Furuno utilizes Wi-Fi for multiple functions in its NavNet TZtouch2 MFDs and also to link its DRS4W 1st Watch wireless radar to your tablet's display. And Garmin's Wi-Fi Adapter kit allows pairing between your MFD and a number of apps and mobile devices. 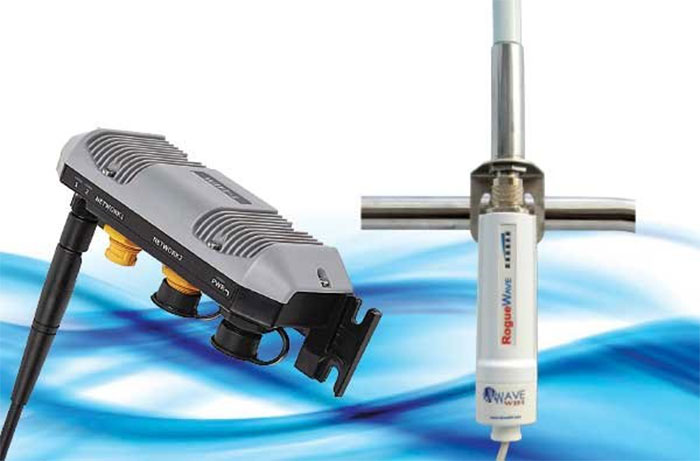 Many MFDs can have Wi-Fi added with a black-box type of unit, with plug-and-play installation. You need to pull in signals from miles away? Then a bridge system is in order. (Photo: Shutterstock, Sofimanning)

You say you want a system that allows you to enjoy a broader connection with reality? Even when there's no signal to be found, if you're within cellphone range, you can always use your own phone to create a hotspot — but this can be expensive, a bit buggy, and relies on a good cellular connection. And proximity to a cellphone tower isn't necessarily the endgame. Some towers are "aimed" more inland than out to sea.

In addition to using your phone, companies such as Verizon offer dedicated 4G LTE Wi-Fi routers that operate off its system. These typically have their own "number," are billed as additional equipment, and use your phone's data plan. But many find these to be a good solution. Amplifiers for cellphone signals are available and improve the reception of the dedicated cell/data routers.

Fortunately, many marinas now offer Wi-Fi hotspots, or there may be a café or hotel near the anchorage that provides one. But consider yourself very lucky if your computer or phone is able to grab these (commonly weak and spotty) signals without a little help. The first step to enjoying these connections can be as simple as plugging in a Wi-Fi extender. USB plug-ins, like the C. Crane Super USB Wi-Fi Antenna ($70) or a BearExtender PC USB Wi-Fi Booster ($45), can extend your ability to get connected by thousands of feet.

If you need more range, you'll be looking at systems like the Wave Wi-Fi Rogue Wave (which costs just over $300), the Wirie Pro (just under $700), or a Digital Yacht WL 510 (about $750). These are essentially "bridge" systems that consist of an external Wi-Fi antenna and/or an ethernet converter, router, and/or a booster/modem.

Inexpensive Wi-Fi extenders can increase your ability to get connected by thousands of feet. Powered boosters can expand that range up to 6 or 7 miles.

The simplest of these systems increase range by up to a mile, while those with powered boosters can increase range more substantially. In some cases, these can extend your range up to 6 or 7 miles — though the manufacturers clearly note that range can vary quite a bit, depending on signal quality and current conditions.

You can also opt for more extensive systems that automatically use free Wi-Fi signals when they're available but tap into the 4G cell network when they aren't. The WiFi In Motion MAX Marine, for example, which runs in the $1,000 range (plus data-plan costs), has multiple SIM slots to utilize different carriers, combines a router/antenna/amplifier system so you can almost always get a signal one way or the other, and can be deactivated during the off-season so you only pay for the months you use your boat.

Then, of course, there are satellite systems to consider. Unless your boat is a yacht, this is probably overkill. And satellite systems are most certainly not intended for DIY installation. That said, if you want the ultimate in Wi-Fi at sea, you should check out systems from the likes of KVH and Intellian — and expect to spend thousands of dollars.

Assuming your boat doesn't fall into the yacht category and that satellite isn't going to be a realistic option, installing any one of these other systems is a fairly easy task. The simplest extenders plug right into your device, and the next step up in bridge systems only requires mounting the exterior antenna and routing the wire.

In the case of the Digital Yacht WL70 ($200) or the Rogue Wave, the antenna threads onto a standard 1-inch/14 VHF antenna mount. Route the attached cable belowdecks, supply power as necessary, and simply plug it into the device via either a USB or ethernet connection.

For the more substantial systems, you'll need to add an interior booster/modem to the antenna installation. These must be hardwired to a 12-volt power source, and depending on the system, you also may need to wire in a separate router if you want multiple connections.

Still, for most savvy DIY boaters, this is pretty easy stuff. And considering all the advantages you get from having Wi-Fi on board, I have to ask, "Wi not?"