The COLREGS or Navigation Rules govern our responsibilities as vessel operators, both in inland and international waters. 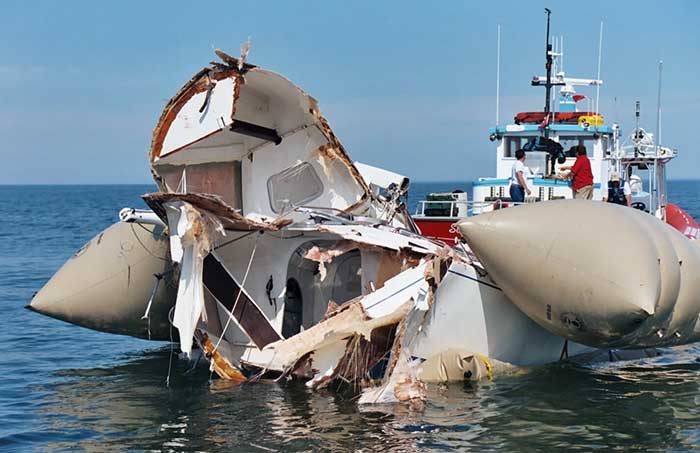 Let's face it, my fellow boaters, I'm a practical sort. First, I know that the second I mention COLREGS, I would normally lose part of my audience to the flashy photos of that new 45-footer or sexy chartering couple. But this is BoatUS and Seaworthy. You are not interested in the glitz. You are interested in safety. Right? I hope so.

What are the COLREGS? That acronym stands for Collision Regulations, or to be precise, The International Regulations for Prevention of Collision at Sea. Those who know and love them refer to the COLREGS as the Navigation Rules, or Nav Rules for short, and if everyone at all times adhered to the Nav Rules, we wouldn't have any collisions while underway. (That would be a good thing, even though it might put me out of business). The COLREGS govern our responsibilities as vessel operators, both in inland and international waters.

The International and Inland Rules are similar. If I were to sum up the differences, I would suggest that the International Rules are more for large commercial shipping, blue water vessels. As of 2009, 37 states and territories out of a possible 57 had adopted the Inland Rules in place of specific state regulation. That said, you need to know if your state or territory falls into either category because there are some rather unique state (and even county) specific rules out there, such as speed limits.

In this article, the discussion is limited to the Inland Rules, and I am going to use some general case history (with the locations and scenarios altered for confidentiality reasons) to illustrate how the Rules come into play. I have italicized words and phrases to add emphasis for a better understanding of the Rules.

Several years ago there was a terrible accident in Galveston Bay, Texas. A larger motor yacht (V1) was headed in a westerly direction at about 20 knots in the late afternoon. The weather was good and visibility was unlimited. Then tragedy struck when V1 struck a smaller boat (V2) drift fishing in the bay. V1 rode over the entire length of V2, exiting the deck on the port bow. Two out of three people on the smaller vessel were killed. In the court battle that ensued, V1 was assigned the majority of fault for failure to keep a proper lookout (Rule 5), failure to take action to avoid collision (Rule 8), as well as a Subpart II, Rule 13 violation for overtaking.

About 40 percent of the blame was attribted to V2 for violating several of the same Rules.

Let's look at which rules were violated.

As defined in this Rule, both boats were "underway." A vessel is deemed to be underway when she is "not at anchor, or made fast to shore, or aground." So if you are drift fishing, motor off, music blaring, and not paying attention to your surroundings, then you are in violation of the Rules because you are a "vessel" and you are "underway" and don't have a proper lookout.

Incidentally, the rules specify what a"vessel" is, and a paddle board or PWC is defined as a "vessel" just as much as a 50-foot cruiser.

Rule 3 (k) states: "Vessels shall be deemed to be in sight of one another only when one can be observed visually from the other." Notice the rule states "can be observed." In the above case, the owner of the larger vessel argued that the smaller vessel could not have been seen because of glare. Testing showed that the glare off of the water did compromise his forward vision, but because there was an issue with visibility forward, V1 should have reduced speed to compensate. It is important at this point to note that the Rules apply to both vessels equally. V2, in this case, should have had no limitations on seeing V1 approaching, with a bone in her teeth and taken appropriate action.

A fun fishing outing turns deadly after a collision in restricted visibility.

This Rule states that "Every vessel shall at all times maintain a proper lookout by sight and hearing as well as by all available means appropriate in the prevailing circumstances so as to make a full appraisal of the situation and of the risk of collision." If all mariners abided by this one simple Rule over all others, then perhaps all of the other Rules wouldn't be necessary. Essentially, it is your responsibility to understand what is around you all the time and act, pursuant to the Rules, once you have deemed that a "risk of collision" exists. (See Rule 7.) "All available means appropriate" include using radar, AIS, binoculars, etc., if they are on board and "available." In this case, V2 did not comply with this rule. Arguably, V1 was also not in compliance because V2 could have been seen if the proper measures had been taken, or the radar had been on.

"Every vessel shall at all times proceed at a safe speed ... " and here is the important part "so that she can take proper and effective action to avoid collision ..." In this rule, the state of visibility, how many boats are in close proximity (traffic density), how quickly your boat (or the other boat) can turn or stop, and what the weather conditions are would be just some of the considerations to take into account to determine if a vessel was proceeding at a "safe speed." So in this case, V1 may have been in violation of Rule 6 if it can be demonstrated that the glare affected visibility forward.

This one is fairly straightforward, or so you would think, given the following language. "Every vessel shall use all available means appropriate to the prevailing circumstances and conditions to determine if risk of collision exists. If there is any doubt, such risk shall be deemed to exist." To keep it simple, if you think that there is a possibility that you might cross paths with another vessel, then assume that you will, and act accordingly. Both boats failed miserably here.

If you think you might be on a collision course, what do you do?

I don't care if you think you have the right of way, or the other guy is an idiot; you must take action. The Rule states, "Any action taken to avoid collision shall if the circumstances of the case admit, be positive, made in ample time and with due regard to the observance of good seamanship."

Let's see it from the position of V2 in the above situation. Why should I "take action" when I am the "Stand-on Vessel?" Because the Rules say you should.

Rule 8 (f) (iii) states: "A vessel, the passage of which is not to be impeded (is the stand-on vessel) remains fully obliged to comply with the rules of this part ... "

This rule states that even if you are the vessel required to "keep her course and speed," the stand-on vessel "may, however, take action to avoid collision by her maneuver alone, as soon as it becomes apparent to her that the vessel required to keep out of the way is not taking appropriate action ... , " Rule 17 (b) goes even further and requires the stand-on vessel to "take such action as will best aid to avoid collision" when she finds herself so close that a maneuver by the give-way vessel alone will not do the trick. This old poem says it best: "Here lies the body of Johnny O'Day who died preserving his right of way. He was right, dead right, as he sailed along ... but he's just as dead as if he'd been wrong." 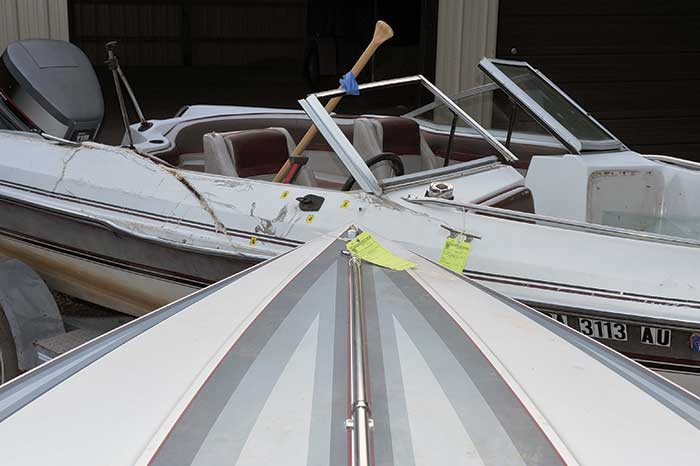 What can happen when a head-on quickly turns into a crossing situation.

In the end, how could this tragedy have been avoided? V1 should have had a better lookout and if there was glare that limited visibility, they should have reduced speed. V1 had operational radar and they should have used it. V2 was a vessel underway and, even drifting with motor off, they were responsible to keep a proper lookout. V2 should have recognized the risk of collision and acted accordingly (started the motor and moved out of the way and/or sounded five short and rapid blasts — danger — with their horn). In failing to do so, they became liable for a portion of the damages.

Let's look at another case. In this case we have two powerboats traveling on a river early in the morning. They are about to start a fishing tournament and they are both heading in the same direction. V1 passes under a bridge and proceeds up the river at a speed of about 35 mph. V2, not far behind, decides to pass V1. He throttles up and starts to pass on the port side of V1 but seconds later, as they begin to enter a turn in the river, V2 pulls the throttle back and goes dead in the water. V1 ramps up over the other boat, killing the operator. Tragic.

If you are an overtaking vessel, then you are required to "keep out of the way of the vessel being overtaken". Here is the important part for this particular case. You are not finished "overtaking" until you are "finally past and clear." How do you know? Had the risk of collision passed? The answer in this case was no.

What about a head-on or meeting situation? I think this one is fairly simple; each vessel "shall alter her course to starboard." But this is where it gets difficult. "Head-on" is basically defined as meeting on "reciprocal or nearly reciprocal courses." There are no double yellow lines out there, no skid marks for us to see. By day, if you see the bow or mostly the bow of an oncoming boat or at night if you can only see the sidelights with a masthead light directly above them, then you are meeting head-on. In a head-on situation, both boats should alter course to starboard, passing port to port. But what if both boats are not quite head-on and turning to starboard puts you directly in the path of the other vessel? In a head-on situation, both vessels are required to alter course to starboard unless otherwise agreed to in advance.

Last one for now, I promise. "When two power-driven vessels are crossing so as to involve risk of collision, the vessel which has the other on her starboard side shall keep out of the way ..." Instead of speeding up to pass ahead of the other boat, you should pass behind them (yes, that is in the Rules). I like to keep it simple and think of it like a traffic light. Using the colors of your side lights (green to starboard and red to port), if you are to port of another boat, then you would see a red light which should signal "stop" or at least caution. If another boat is to your port side, then you would see their green light, which means you can proceed safely (but cautiously) ahead.

Failure to yield in crossing situations can be deadly. 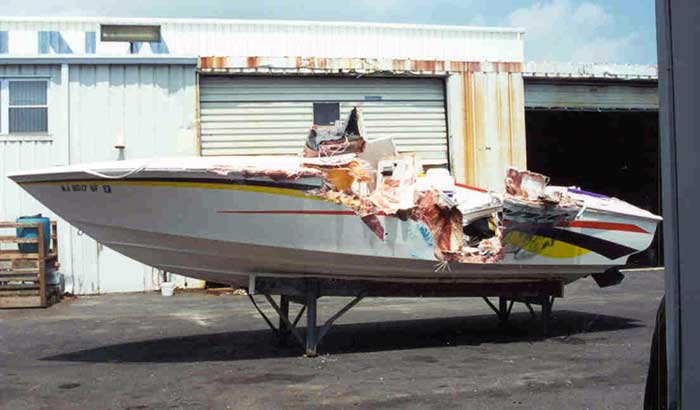 Tragic consequences from a side impact.

I often get asked how percentages of responsibility are determined. The answer is by judges, juries, and attorneys. The take-away message is that in a two-vessel collision, unless your boat was unattended and made fast to a legal mooring in a designated harbor, you are probably partially at fault. As an accident investigator, I have the privilege of 20:20 hindsight. I hope to impart some foresight so I don't have to use my hindsight. It would be my pleasure for you to put me out of business.