Many boaters would like their dogs to enjoy being on and around the water as much as they do. After all, who wants to leave Fido behind when the rest of the family is headed to the lake for a day of waterskiing and swimming?

While many familiar breeds associated with the water such as labs or retrievers make excellent boat dogs, some boaters may not have the space either at home or on their boats for a "full-sized" or large dog. And while just about any adventurous dog, whether full-bred or mixed, can become a great boat dog, there are less common breeds that are specifically raised to love the water and work on, from and around boats.

A Tribute to Furry Boaters Everywhere

While still rare in the U.S., Canadians have enjoyed the company of these energetic and hardworking retrievers for decades. With a reddish coat and a head and muzzle similar to a golden, some mistake "tollers," as they are called, for small or stunted retrievers. Tollers are water-loving, working dogs bred to aid hunters and retrieve waterfowl. "Tolling" means to swim offshore, to splash around in the water and attract curious ducks and other waterfowl closer to the hunter. But expecting a toller to act like a little lab or a golden is a big mistake. These highly intelligent dogs learn quickly, but will frequently make their owners question exactly who's in charge.

"Labs are wonderful because you're the king to a lab," says Mary Johnson, a BoatUS member since 1982 who now owns her second toller, Minnow. "That's not how tollers view the world. Tollers think of you as a sibling." It's not that they can't be trained or don't listen, Johnson says, "they kind of mull over what you are asking them to do and decide if it's in their best interest." 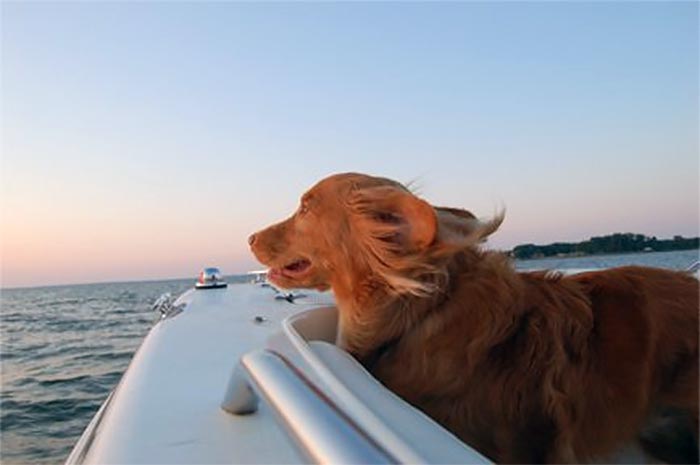 Elvenwood's Golden Snitch, or Finn to his friends, enjoys the speed of the family bowrider. ( Photo by Michael Vatalaro )

As boating companions, "the problem is not getting them in the water," says Christie Canfield, the public education coordinator for the Nova Scotia Duck Tolling Retriever Club (USA), "it's getting them out." Tollers live for the water and playing fetch, says Canfield, whose three tollers love to head out on the boat on the lake with her. The smallest of the retrievers, most tollers come up about to your knee when sitting and weigh between 30 and 50 pounds. They have a double coat, with a longer, "wash and wear" outer coat over a thick undercoat that keeps the dogs warm even in cold water. A weekly brushing will keep most tollers' coats in good shape although they do shed seasonally.

Canfield cautions that tollers aren't for everyone. They are high-energy dogs that require a lot of exercise and as a working breed, they need a job or activity to keep them occupied and learning, whether it be agility trials, hunting, flyball, or just teaching them new tricks. In fact, her organization has produced a publication referred to as "The Top Ten Reasons Not to Own a Toller."

But for boaters, the toller's compact size, water-loving nature and general desire to be with their owners can be irresistible. Jim and Jeanne Wolf of Elvenwood Kennel in Portsmouth, VA, have placed several of their pups in boating households. One of them, Elvenwood's Admiral Arlo, or Arlo for short, has his "own" canoe. 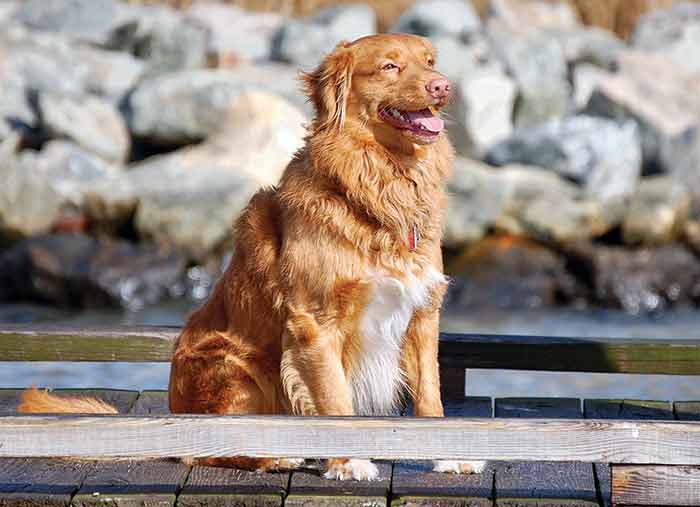 Something to consider when taking a toller aboard, according to Jeanne, is that most tollers have no fear of water and don't seem to care whether they swim in a lake or the Atlantic. Which means life jackets are a must on open water and sometimes tethers must be used to keep the dog in the boat, though that varies from dog to dog. At least one toller owner has taken to using a ski rope to tether the dog to the boat so they can reel him back in when he strays too far. Some won't jump from a moving boat, but others, such as Johnson's first toller Dory, can't control themselves. Dory loved the water so much, says Johnson, she would cry when they drove over bridges.

"She would last about 30 minutes in the boat and then jump over," says Johnston. "I couldn't fish because I spent my time trying to keep her in the boat." 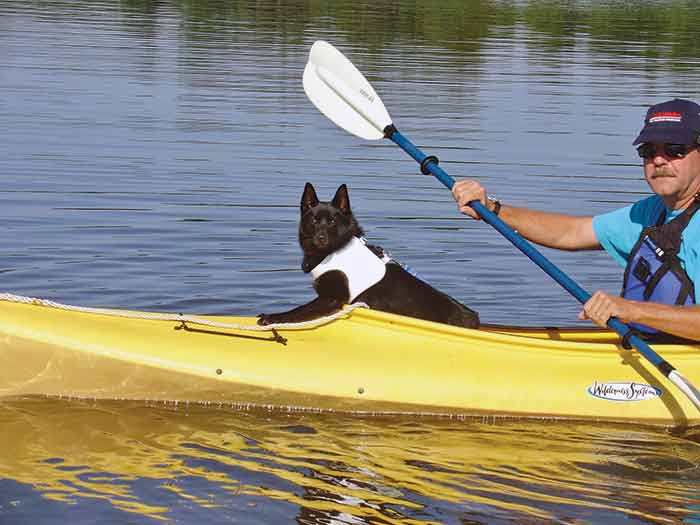 Skipper barks out a heading for owner Randy Thompson to follow when exploring from their 39-foot Krogen Soul Tender. (Photo: Debbie Thompson)

Originally developed in Flanders to work on the canal boats of the Dutch low country and Belgium, Schipperke means "Little Captain" in Flemish. These all-black dogs pack a mischievous attitude and funloving nature into a 15- to 20-pound frame.

David Tingle, a former charterboat captain of a 60-foot Morgan based in the Caribbean, has owned five Schipperkes starting with Clancey, a dog that had already made the trip from Ft. Lauderdale to St. Thomas by boat at six months of age.

"If you are looking for a dog on a boat, the only dog to have is a Schipperke," says Tingle. "They don't smell like a wet dog when they are wet; they're small, agile, swim well and are very low maintenance." Tingle remembers windsurfing with Clancey on his board and many times when he would fall off, the dog wouldn't, leading him to paddle back to the board to be greeted by a dog whose expression said, "What did you do that for?"

According to Tingle, Clancey became well known in the marinas, even better than him and his wife. Clancey was so beloved by charter guests that he became despondent between charters when only David and his wife Jan were around to pay attention to him, which led them to acquire a second Schipperke, Colleen, as a companion. Colleen was not as water-oriented as Clancey, but still took to the boat well. However, she exhibited some herding instincts that Tingle thinks come from the breed sometimes being used on farms. While on Virgin Gorda in the British Virgin Islands, Colleen decided that allowing the eight resident goats to wander around the boatyard was unacceptable and proceeded to herd them onto the marina fuel dock and from there onto a 32-foot sailboat, much to the amusement of onlookers.

The two dogs remained with the Tingles onboard until they moved back to land in 1993. They still have Colleen's first pup, Bosun, now age 13.

Though the word "water" is in their name, boating is in the blood of these dogs. Bred for centuries to assist commercial fishermen, these dogs served as messengers, watchdogs, and even as foghorns. Portuguese Water Dogs helped haul in nets, jumped in the water to herd fish, swam messages between boats in the fleet in the days before radios, retrieved items lost overboard, and if the fog rolled in, sat in the bow listening and barking at other dogs as a sort of primitive radar system. In fact the breed nearly became extinct in the 20th Century as modern electronics diminished the fishermen's need for the dogs.

Carole Prangley-McIvor and her late husband lived aboard a 43-foot Shannon ketch Somewhere with as many as three Portuguese Water Dogs at a time for several years while cruising the Caribbean and beyond. She discovered the breed after seeing an ad in the U.S. Power Squadron's magazine, The Ensign, for "the perfect boat dog" in 1981. Though the former BoatUS member moved back to land in 1994, she still owns Portuguese Water Dogs, including Casey, who enjoys sharing kayak rides. 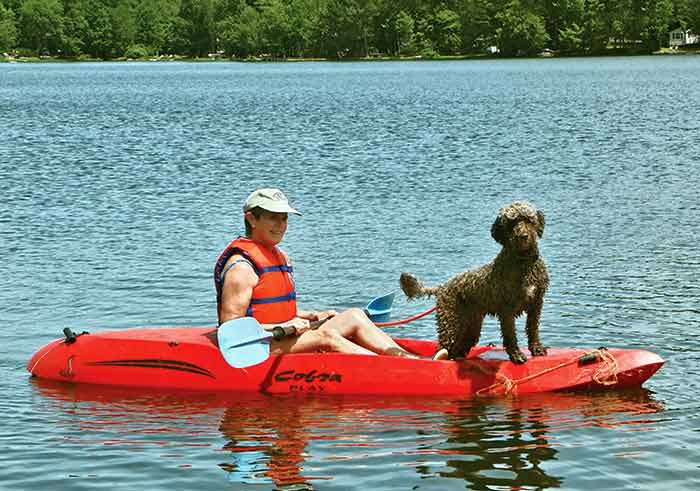 Casey stands watch, as her ancestors did on workboats. (Photo: Carole Prangley-McIvor)

"They were our goodwill ambassadors," says Prangley-McIvor. "People loved them. People were amazed when we came ashore with three dogs." The dogs stayed aboard for much of the couple's island hopping, making 24- to 48-hour passages harnessed in the cockpit. The dogs even remained aboard as the couple rode out Hurricane Hugo, sitting below quietly in life jackets.

The Portuguese Water Dog Club of America is in the process of developing water tests that reflect the breed's working heritage. Dogs can now test for and earn up to five levels of competence at water trials, where each dog must complete a variety of tasks, including retrieving lines, towing people, towing small boats with a person in it, and retrieving from the bottom, as much as 10 to 12 feet down.

Regardless of whether your dog was bred for the water or simply loves boating, you should take steps to prepare your boat and canine pal for a day on the water. Life jackets are a must for dogs who are not strong swimmers or are venturing with you offshore or at night. A variety of sizes are available from several manufacturers. Harnesses that do not restrict swimming movement are ideal for keeping dogs aboard and boarding ramps and ladders can help them back aboard after a refreshing swim. There are even doggy "heads," patches of artificial grass that you can keep aboard. For the latest in product information, check out Pawsaboard.com or Pupgearcorporation.com.

Michael Vatalaro is the former executive editor of BoatUS Magazine. He has a Pursuit center console, which he uses in the Chesapeake Bay.