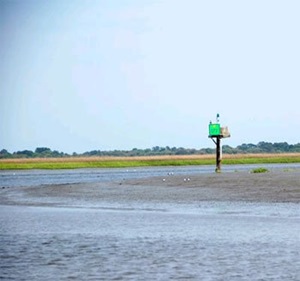 November marks the beginning of boats, trailerable and yachts, making an annual voyage south along the Intracoastal Waterway. Along the way, a skipper will come upon channel markers with the usual red or green colors, but with an added yellow rectangle or triangle as well. What to do?

The maxim "red right return" works, but on the ICW, which way is returning?

Here's what to do: Going south on the ICW from New Jersey to Texas is considered a "return." In fact, if you consider the ICW going in a clockwise direction (from north along the East Coast all the way south to Brownsville, Texas), the red is on the right. Following the same clockwise direction, boaters going north on the West Coast also keep the red on the right. But there are channel markers and then there are ICW channel markers.

ICW channel markers always have a yellow rectangle or square, and in the event two markers offer conflicting directions, the yellow colors supersede the colors of the actual red or green marker on which they appear. When traveling southbound, markers with a yellow triangle should be passed by keeping it on the right (starboard) of the vessel while markers with a yellow square or rectangle should be passed by keeping it to the left (port side) of the vessel.