Work From Almost Anywhere Onboard

Working from your boat could be one way to spend more time aboard. Even better, staying connected need not be complicated or expensive.

For less than $2,500, Jim Leshaw installed an onboard wireless network that allows him to work from many remote locations.

It was only 15 years ago that, while cruising in the Exumas, I met a man aboard his fishing boat, The Other Line. He explained that his aptly named boat permitted his assistant back at the office to accurately tell callers that "he is on the other line." With advances in technology, this deceit is no longer necessary. It is now truly possible to work from your boat — from many remote locations — at an affordable cost.

After some research, I equipped my 34-foot PDQ power cat, Thing 1 Thing 2, with an onboard network through which multiple devices, such as laptop computers, tablets, and smartphones, could connect to distant Wi-Fi stations or cellular networks, whether I'm at the dock or cruising the coast. After installing and testing the system I'm happy to report that results exceeded my expectations. I have fast, reliable internet and cellular voice communications throughout Florida and almost the entire Bahamas, up to 12 nautical miles offshore, with an easy-to-install, affordable system. Here's how I did it.

Connecting To The Outside World

The key to turning your boat into a fully functional office is connectivity. Practically speaking, there are three ways to connect a boat to the outside world: cellular, Wi-Fi, and satellite. Satellite works pretty much anywhere, including at sea, but is excruciatingly slow for all but voice calls or bare-bones emails without attachments or graphics. It also can be very expensive. For this reason, most coastal cruisers choose to focus their day-to-day communications efforts, as I did, on cellular and Wi-Fi only.

A quick internet search will help you locate multiple VPN providers. I use the Norton Wi-Fi Privacy App, which costs $7.99 per month for up to five devices. The price is easily worth the peace of mind of knowing you can connect safely to any mobile network.

I installed an onboard wireless network so that my Wi-Fi-enabled devices need only connect to a single Wi-Fi network, which is kept on 24/7. The onboard Wi-Fi system connects to the internet via external Wi-Fi and cellular antennas. I selected an integrated system consisting of the Wave Wi-Fi MBR 550 router, Rogue Wave Pro Wi-Fi antenna, and Wave cellular antenna. (A Xantrex Prosine 2.0 pure sine wave inverter delivers 110-volt power for this equipment.) My cellphone and tablet are connected to the internet via the onboard Wi-Fi system rather than directly to cell towers, thereby increasing overall performance and eliminating separate data and roaming charges for each device.

The heart of any onboard network is the router. The MBR 550 is specially designed for marine use. It's compact and has a metal casing, a slot to insert a cellular SIM card, and inputs for one or more external cellular, Wi-Fi, and satellite antennas, although I don't use the latter. With the easy-to-use interface, I can toggle between input sources (cellular and Wi-Fi) from my iPad to maintain the data connection if one becomes weak or unstable. The MBR 550 also has a number of available functions on the interface that I don't utilize but others might, including the ability to provide separate passwords and data limits to different users. These controls are extremely useful to limit streaming or online gaming.

My decision not to mount the cell antenna at the top of the antenna mast was based on space constraints and aesthetic considerations. Had I mounted the cell antenna higher, I would likely have further increased the cellular range. The MBR 550 also comes with "rubber duck" antennas (short, flexible, omnidirectional antennas) attached to the unit, which can be used in place of the external antenna, but the range is likely more limited than with the external antenna. All in all, my system cost less than $2,500. Although not an insignificant amount, the speed, convenience, and savings over the long term have been worth it.

SIM card: Short for subscription identity module, this is what identifies your connected device to the network and ensures that you're able to send and receive calls and data.

VPN: Though not essential, a virtual private network ensures that transmitted data is encrypted and unable to be intercepted and read by scammers.

VoIP: Voice-over-internet protocol is the method by which voice can be sent as data.

4G: The fourth generation of wireless cellular service — considerably faster than earlier versions. Some carriers are beginning to roll out 5G, or fifth-generation, service.

When my wife and I are in the Bahamas, we spend most of our time on the hook and, therefore, rely almost exclusively on cellular input from the SIM card located within the router. To my surprise, we've enjoyed strong cellular communications through our onboard system, even from anchorages more than 10 nautical miles from the nearest cell tower. The speed of the connection is true 4G — multiple times the speed we could achieve on our cellphones if not connected to the onboard system. The Wave Rogue Pro Wi-Fi antenna has the ability to access available public Wi-Fi at far greater distances and higher speeds than would be available without an external antenna. This function is a great benefit to boaters who regularly overnight in marinas. With the Wave Rogue Pro, we regularly have excellent connection to marina Wi-Fi networks, regardless of where we tie up, even when our neighbors have little or no connectivity or are anchored off the marina. 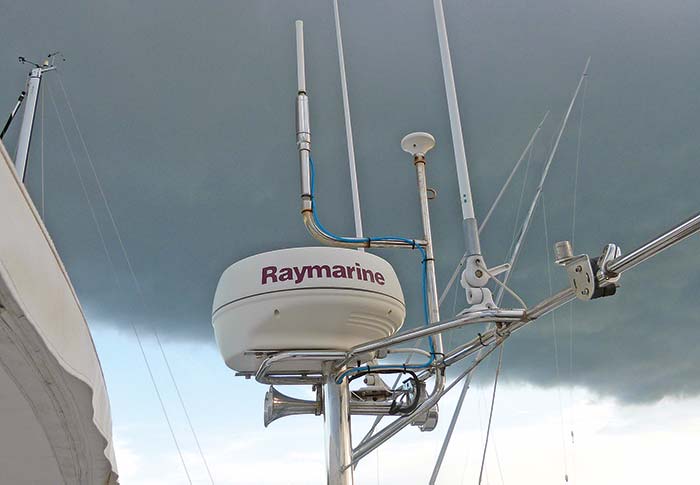 Jim's boat is outfitted with a Wi-Fi antenna (the short antenna on the left) and a cellular antenna (next to Wi-Fi).

One of the handier features of the MBR 550 interface is its ability to scan for Wi-Fi networks either by signal strength (highest first) or Wi-Fi security (lowest first), thereby facilitating a search for unsecured networks. Gone are the days when businesses were reluctant to disclose Wi-Fi passwords to paying customers. We found that if we bought a drink or meal, most bars, restaurants, and marinas are willing to share Wi-Fi passwords. When anchored off a hotel, restaurant, marina, or other facility with Wi-Fi, we often can connect to these public Wi-Fi networks from more than a half-mile offshore. Once a wireless network is selected, the password can be punched in a single time through the router's user interface, thus eliminating the need to enter passwords into multiple devices.

Making Calls On The Cheap

The ability to make and receive reliable, clear, inexpensive voice calls is essential to any land- or sea-based office. Most large companies, many smaller companies, and even individuals rely on voice-over-internet protocol systems (VoIP) for land-based communications. The concept behind VoIP is simple — telephone calls travel via the internet rather than over a dedicated telephone line. To work seamlessly, the internet connection must be good quality, but can be wired or wireless. There are many free apps that provide reliable, high quality, and generally free voice and video calls from cellphone to cellphone, such as WhatsApp, Skype, and FaceTime. These apps are particularly useful when traveling outside the United States as they rely on data rather than voice connectivity and are not subject to long-distance charges. Because VoIP communications rely on a data line rather than voice line, the SIM card used in your marine router needs to include only a data plan with no voice plan — an additional cost saving. Sixty dollars per month will get you a Verizon SIM card — other carries charge similar fees — which is good for ten gigabytes of cellular data, although cheaper plans starting at $10 are available if you will only send and receive over cell networks occasionally.

In addition to providing the added freedom to spend more time on the boat, I found that having a reliable onboard communications system increased my comfort and safety. For example, I regularly download GRIB weather files to get current and projected wind and wave conditions along routes. When necessary, the communications system can also be used to connect with mechanics via telephone or even videoconference to troubleshoot mechanical issues, thus providing an additional level of safety and comfort.

Jim Leshaw is a lawyer who lives and works in Key Biscayne, Florida. He also spends time working from his boat while cruising.