Does Your Boat Scare the Fish?

Some boats scare fish worse than others, but there are several things you can do to fix your fishing machine. 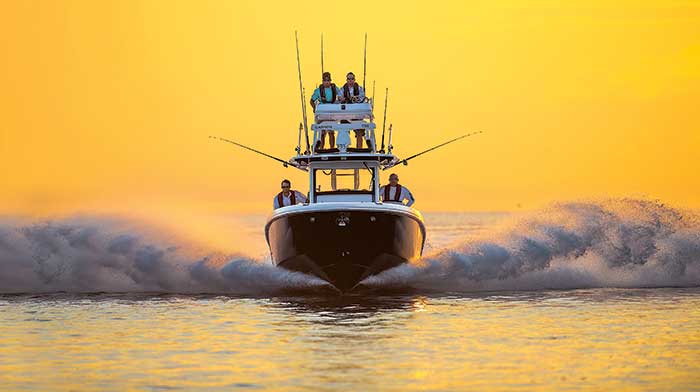 Slow down! The first step to not scaring the fish is a stealthy approach. (Photo: BoatingPhotography.com)

You say you want to fill that cooler with fish? Then stop scaring them away! We anglers scare off fish far more often than we realize, thanks to sound, vibration, and other factors we may not be taking into account. A big issue here is a failure to understand our quarry. Fish "hear" sounds and "feel" vibrations via their lateral line, which is a series of special sensory organs called neuromasts running along the fish's flanks. Inside a neuromast are tiny hairs in a jelly-like medium. And with those tiny hairs, a fish can sense movement and vibrations in the water. In other words, fish aren't quite as thick as you think, and when you stomp on the deck or slam that cooler shut, every finned critter within casting distance knows something may be amiss.

Rig with care! Dropping a lead sinker or jighead on deck is almost as bad as slamming a hatch.

One important thing you can do to boost your catch rate is to reduce the amount of noise you make. Unfortunately, no matter how careful you are, your own boat may be sabotaging these efforts. Some boats alarm fish more than others. But take heart, savvy angler: once you know about these five common fish-scaring flaws, you can institute corrective measures. Here's how:

Engines scare fish. But all engines are not equally noisy. The biggest offenders are two-stroke outboards. Particularly when in neutral, they create a real racket. You can hear the clickety-clack of metal parts hitting one another, right? That sound travels through the water, too. In shallow waters and calm conditions, when stealth becomes imperative, the best workaround is to plan your approach to hotspots so you can shut down the engine while it's still in gear, then drift into position.

One of the loudest sounds made below the waterline by most other engines — electric trolling motors included — is prop noise, directly related to prop speed. In other words, slow down. You can significantly cut the level of noise simply by backing off on the throttle. Another noise no-no you create with your power plant is the "thunk" of shifting in and out of gear. Again, this metal-on-metal sound travels well underwater, and fish don't like it. Though I haven't experimented with the new shift-dampening props (such as the SDS by Yamaha) or smoother-shifting stern drives (like the new Mercury 4.5L, which incorporates a new lighter flywheel for smoother shifting), I've observed firsthand how many species flee when boats are shifted into gear.

When putting fishing rods in the bed of a pickup to trailer down the road, always lay them with the butt end toward the front of the truck. Laid tip-first, they may break if you have to slam on the brakes and momentum carries them forward.

It's worth noting that in some cases, specifically with large inboard diesels, the deep thrumming of the motor may actually bring fish to your boat. There's more than mere anecdotal evidence to support this claim; according to marine biologist and author Daniel Bagur (Where the Fish Are, International Marine Press, 2009), certain predators are attracted to some long-wavelength vibrations. A few years back, I recorded the underwater sounds made while trolling on a 50-foot sportfish, and I sent the recordings to Bagur. He confirmed that many predators should find the type of sound created by the big diesels swinging large props attractive, as opposed to scary.

The sound of water slapping against a hull, particularly one with reverse chines, can be so bad for fishing that a few boatbuilders actually design "quiet" chines. Of course, if your boat doesn't have specially designed chines and you can't get a bite while listening to that slap-slap-slap all day long, you're more interested in finding a solution than in what some boatbuilders may or may not do.

Positioning your boat properly is the first step. If you can keep the stern into the seas safely, you'll eliminate the problem to a large degree. But this isn't always convenient, safe, or even possible. Another measure you can take is to weight down the bow a bit. On some boats, moving a full cooler (or an extra angler) onto the bow is enough to completely submerge the offending chines. And on some others, shifting weight to one side or the other will eliminate the slap.

Another trick that works on certain boats (while adrift or at anchor) is to slide a foam pool noodle under the chine, then push it far enough back that water pressure holds it in place. Be sure to tie a piece of fishing line to the noodle and secure it to the boat so it doesn't float away if a wave rocks it free. 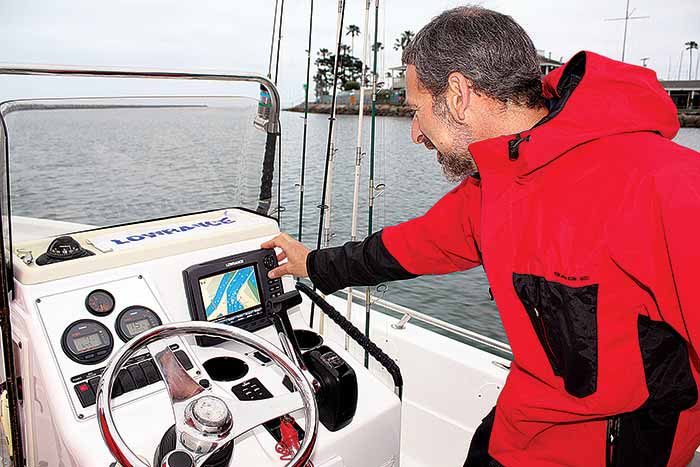 You use a fishfinder to spy on the fish, but it may be alerting them to your presence as well. (Photo: Lenny Rudow)

I know lots of people will say I'm wrong about this (especially the fishfinder manufacturers), but at least some species of fish can hear or otherwise sense your fishfinder — and may even alter course to get away from the pings. Even though many experts disagree, I say this because I've seen it with my own eyes, when I launched a boat rigged with several fishfinders in the quarter-million-gallon habitat tank at the National Aquarium in Baltimore.

While an observer watched from two stories below and we stayed in contact via FRS radio, I tried using the fishfinders in an attempt to differentiate between species. That part of the experiment was a complete failure; I couldn't even tell the difference between a tarpon and a sea turtle. But the surprise lesson was that when the fishfinders were active, some of the fish, and especially the sharks, would go around the boat instead of swimming under it. When all the units were turned off, however, they would swim under the boat without hesitation.

Sure, there are many variables that my less-than-scientific experiment didn't address: power level, transducer frequency, and the artificial environment, for example, could all affect the result. And it stands to reason that in certain situations with certain species, your fishfinder pings could even serve to attract fish rather than repelling them. But the bottom line is this: some fish can sense some fishfinders at least some of the time, and they may even avoid them, so you and I have to consider that a fishfinder may be a potential problem.

While I listened beneath the water's surface with a hydrophone, the loudest of all the potential fish-frightening sounds I heard was a slamming fishbox hatch. The noise created by fiberglass banging fiberglass is akin to a gunshot underwater, and it's certainly enough to scare every living creature within casting distance. Fortunately, this is a fairly easy item to fix. If your boat has a hatch or lid that slams, buy a roll of sticky-back foam rubber at your local marine supply store and make a gasket. Apply it to the offending contact points, and you'll turn that slam into a muted thump.

Some fish can detect even minute amounts of D.C. current, which is harmless to humans. In fact, some species are attracted to certain electrical fields and are repelled by others. There are even a few fishing-tackle manufacturers that have capitalized on this phenomenon by building items (such as the Pro-Troll and the Mako Magnet) intended to bring fish to your boat via electrical discharge. Unfortunately, there's very little reliable science on this subject, and different species of fish seem to react differently to electrical current. Many boats leak a stray electrical current into the surrounding waters, so for all you know, you could be chasing your potential catch right out from under your hull. True, you could just as easily be inadvertently attracting them, but unless you're the marina fishing star, it seems prudent to eliminate all electrical interference.

The safest bet is to test your boat to make sure it's electrically sound. Not only is this good for the fishing; it'll also ensure your running gear doesn't suffer from the corrosive effects of electrolysis. Hook the negative lead of a voltmeter (set to a DC scale of zero to 1 volt, or a scale with tenths of a volt) to the negative terminal of your battery; attach the positive lead to a bare wire. Turn off everything on the boat and lower the wire five or six feet down in the water. Now, turn on your boat's electrical items one at a time while you watch the meter. If it jumps by more than a tenth of a volt, you have a significant electrical leak — and a potential fish problem to deal with. Most of the time, such a leak is due to cruddy connections, bad grounds, and/or bad bonding associated with whatever electrical item causes the voltage change.

Of course, there are other things, aside from your boat, which will still freak fish out. Your own voice at a regular conversational level, for example, can be heard a good 15 to 20 feet below the waterline. Screech like a banshee when you miss a bite and you're going to send the fish scurrying. Even casting a shadow across the water will spook some fish, which live in fear of attack from above via osprey or eagle. But at least now you know what to do to make your boat less of a fish deterrent — and with a little luck, the next time you hit the water, you'll come home with a full cooler.