Watersports boats have undergone yet another transformation to accommodate the latest big thing — wakesurfing. 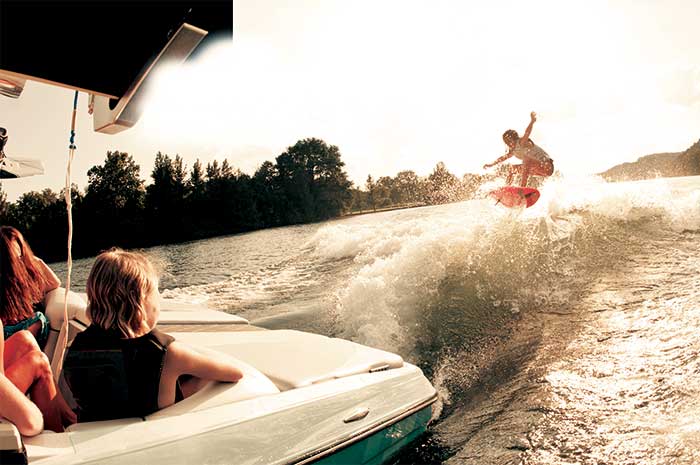 Decades ago, competitive slalom water skiers wanted the flattest, smoothest wakes possible from their towboats. Companies like Correct Craft, Malibu Boats, and MasterCraft designed mid-engine, inboard-powered ski boats that ran flat, and threw up small wakes, to comply. But with the advent of wakeboarding in the mid-'90s, desires changed. Suddenly, a bigger wake was better, along with a high attachment point for the towrope, to provide extra lift during jumps, and the acrobatic flips and twists that accompanied them. The wakeboarding boat, marked by the high tower arching over the boat, was born. Now, just as before, it's still all about the wake, but bigger has become bigger still, as wakesurfing gains popularity.

The latest models can gulp down water ballast to increase the size of their wakes, up to two tons of water weight in some models, or can reshape their hulls with specialized tabs that deploy at the push of a button and throw a surf-able wake to one side or the other. Many of these wake-shaping devices are computer controlled, offering individual riders the chance to program their own profiles to suit their preferences. Or you can rely on pre-programmed profiles that fit your skill level, be it novice or master. Just for kicks, a built-in camera on the tower can record and play back your run for onboard instant replays. You can pretty much do it all behind these new boats. The hardest part might be choosing what to do first. 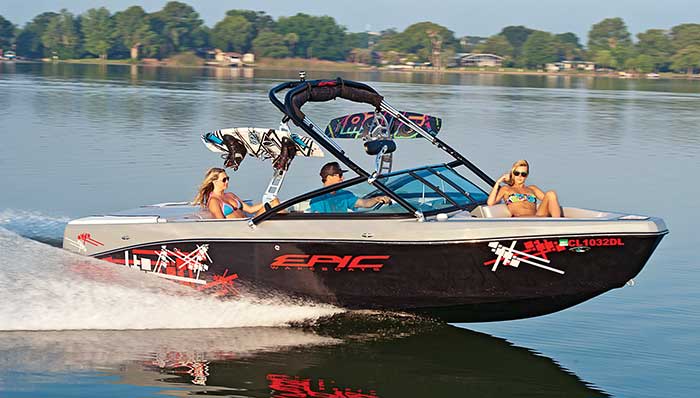 Epic focuses on ride and usability, with foam flooring on the decks that you can hose off at the end of the day, and huge ballast tanks that, coupled with the almost conical hull shape, throw big wakes. The hull is designed to create low pressure underneath itself while in motion, actually sucking the boat down into the water, to displace a bigger wake. The 21V can hold 3,600 pounds of water ballast, but its big brother, the 23V, holds the industry-leading 4,000 pounds mentioned above. There's nothing done small here, including the 15-speaker sound system — eight of which can be found in the transom of the 21V — so your passengers don't have to shout over tower-mounted speakers: "My, what big woofers you have!" EpicBoats.com 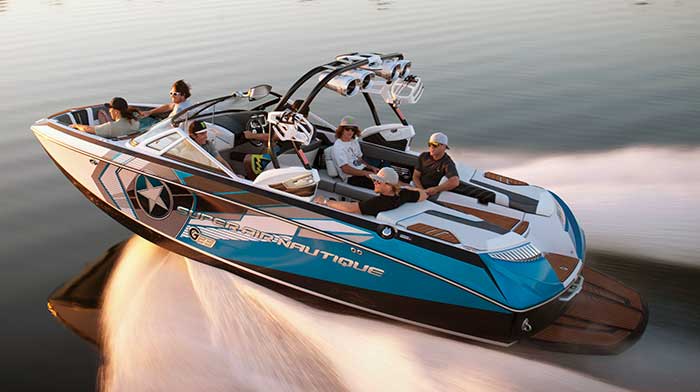 The G23, or its wake, rather, made an impressive debut in April 2012 at the Nautique Wake Games when Australian competitor Harley Clifford landed a wake-to-wake 1080, a world first. For those of you scoring at home, that's three complete revolutions while airborne. And just to drive the point home, a second competitor, Oli Derome of Canada, also nailed one later that same day.

In addition, thanks to Variable-Valve Timing (VVT), the engine has plenty of torque at the low end, and is less weight sensitive at wide-open throttle, improving overall performance. The V8-380 comes standard with closed-loop cooling, and is available with electronic throttle and shift, which allows for joystick control in twin-engine setups.

There's so much going on with the G23, it's hard to know where to start, but at the heart of it all is the Nautique LINC system, the computer-controlled nerve center of the boat. Ballast, speed, and trim controls all interact to shape the wake to each rider's preferences, which can be stored in a customizable profile. There are also preset profiles for wakeboarding, wakeskating, or wakesurfing to starboard, or port, if you're a goofy foot. Up on the Flight Control Tower (great name, right?), a camera mounted in the towrope swivel, beams video down to the screen in the console, the same one that lets you control the LINC system, so you can record and play back your sessions. And of course, the tower folds down, and the trailer tongue swings away, should you want to put the G23 in your garage. With all the fun you'll be having, you won't want to put it in there anytime soon. Nautique.com 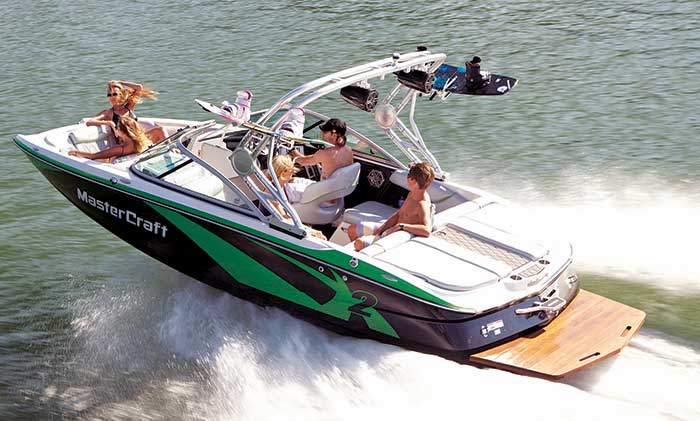 The smallest boat in MasterCraft's lineup, the X2 boasts everything you've come to expect in a MasterCraft ski boat, but with features that make it wake-friendly as well. Three ballast tanks can add 1,000 pounds of water weight, while integrated surf tabs allow you to shape the wake from the dash. This redesigned model is big on storage, with access to a large space below the port side console that can hold wakeboards and surfboards, plus large storage areas beneath the lounges on both sides. The starboard side hides a spot for a removable cooler. The "pickle fork" bow shape opens things up forward, allowing two passengers to sit in rear-facing lounges and watch the action behind the boat. MasterCraft.com 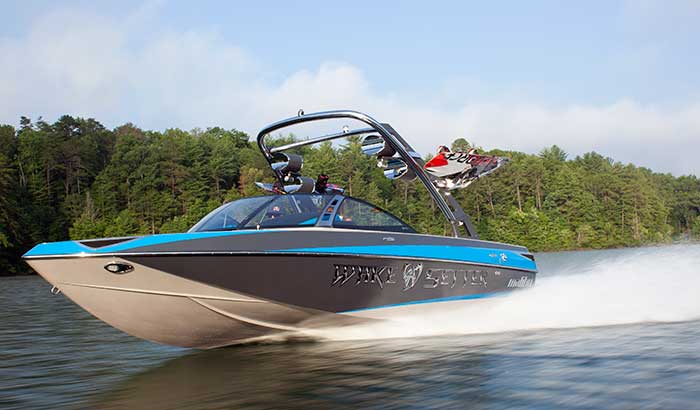 New for 2013 is the smallest crossover in Malibu's lineup, a jack-of-all-trades that you can ski, wakeboard, or surf behind, thanks to 1,250 pounds of water ballast, a power-wedge, and what they're calling a "surf gate." Malibu's patent-pending innovation looks like a large, sideways-mounted trim tab. It works much the same way, raising a large surf-able wake to that side of the boat at the push of a button by displacing the water that flows past the hull. Wakeboarding legend Dallas Friday called it "the eighth wonder of the world," which we assume means she's pretty stoked about it. Choose from five power options from Indmar from 330 hp to 555 hp, add up to 10 of your friends, and go tear it up. MalibuBoats.com 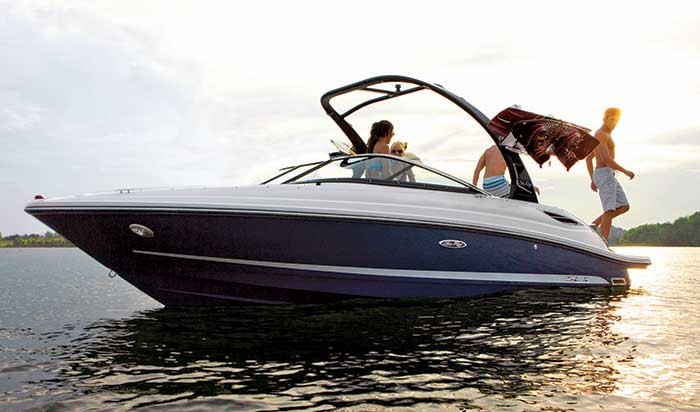 The Sea Ray name might seem out of place on this list, but last year they quietly integrated a slick technology into the hull of their 230 SLX, underselling it, some would say, by calling it Active Trim Control. Sure, it can automatically level out the boat from side to side and fore and aft. What it really allows you to do is shape the wake and hold a nice slow speed for novices, while staying on plane. Triangular tabs mounted in a pocket in the hull are computer-controlled by a Lenco system. When deployed, they effectively change the deadrise of the transom, allowing a large wake at low speeds, and a flat one for water skiing at higher speeds. With a full-width and oversize swim platform, plus options such as a tower and onboard air compressor for inflating water toys, it's a family-friendly option for those who don't use "Dude" as a pronoun. SeaRay.com

Michael Vatalaro is the former executive editor of BoatUS Magazine. He has a Pursuit center console, which he uses in the Chesapeake Bay.