The Trial of Bismarck Dinius 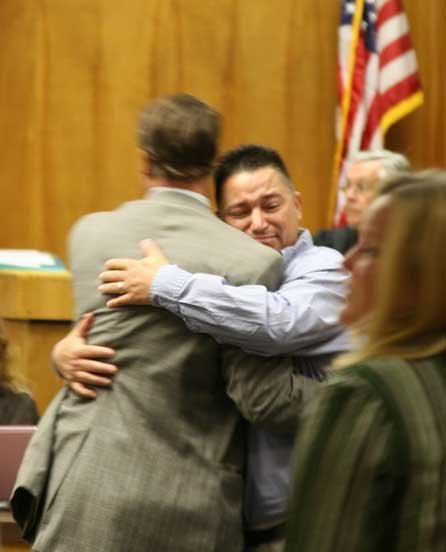 The Verdict: "Not Guilty"

In October, 2008 "A Strange Case of Justice," Seaworthy told the story of Bismarck Dinius, who had been at the helm of a 27-foot sailboat on California's Clear Lake when it was struck from behind on a still, moonless night by a 24-foot Baja that was being operated by Russell Perdock, the number two man in the local Sheriff's Department. The Baja ramped completely over the sailboat; all five people aboard suffered injuries, ranging from bruises to broken bones and concussions. A few days later, the sailboat owner's 51-year-old girlfriend, Lynn Thornton, died as the result of her injuries. The sailboat was insured through the BoatUS Marine Insurance program.

Dinius, who was found to have a BAC of .12, was charged with involuntary manslaughter, which, shortly before the trial, was changed to felony boating under the influence causing great bodily injury. Perdock has never been charged. Nor was the sailboat's owner, who was also aboard.

This past August, after seven hours of deliberation, a 12-member Lake County, California jury found Bismarck Dinius not guilty of felony boating under the influence causing great bodily injury. The same jury also acquitted Dinius of a misdemeanor count of boating under the influence and was deadlocked on a third count of boating with a blood alcohol level of greater than .08. Regarding the latter, the vote was 11 to 1 to acquit and the charge was subsequently dropped. The following interview was recorded two days after the trial.

Haltom: I think we proved they were on. We had five or six witnesses who saw the sailboat set sail with the lights on, including a retired police officer who saw the sailboat's lights on 30 or 40 minutes before the accident. We had Weber [the sailboat's owner] who said he turned them on. We had another witness, Brian Stole, who knows absolutely nobody in this case, witness the accident and saw the lights from the two boats converge. Then there was the testimony of Dr. William Chilcott who said the stern light's bulb filament showed it was on at the time of the accident.

Seaworthy: What about all of the prosecution's witnesses who had said the lights were off?

Haltom: The prosecution was trying to prove a negative. How can you 'see' a boat with the lights off? I showed Bismarck some old Admiralty cases where the court had said the same thing: just because you have a witness who said they did not see the lights on the boat that does not prove the lights were not on. Which one carries more weight — the positive testimony where people saw the light or the negative where people didn't see the light?

I'd put their witnesses in three categories — the three people on Perdock's boat, the two young girls on the shore who said they didn't see the lights and the two fishermen. The girls on shore were having a good time with some friends. About 15 seconds before the collision, they said they heard Perdock's boat and watched as it sped around the point. They both said they didn't see any lights on the sailboat but they weren't paying attention to the sailboat; they were watching Perdock's boat — the one making all of the noise. Also, they would also have to have recognized the sailboat's white stern light against a backdrop of numerous lights on shore.

Seaworthy: What about the two fishermen?

Seaworthy: You said the two girls would have to have recognized the sailboat's white stern light against a backdrop of white lights on shore. Would Perdock have had the same view?

Haltom: Absolutely. According to the testimony of another witness, a retired law enforcement officer, Perdock's boat was headed directly toward an area that was 'littered' with lights on shore. His boat hit the sailboat's stern at a 156-degree angle. Not a direct stern hit, but close. We went out one night and tried to recreate the same conditions as much as we could with the location and angle of impact. It was very easy to blur the stern light with the shore lights, even when you knew the boat was there and were looking for it.

Seaworthy: Would the starboard light have also been visible?

Haltom: No, the impact was more than 22.5 degrees abaft.

Seaworthy: A lot has been written about why Perdock, a police officer, wasn't charged. What about Mark Weber, the sailboat's owner who was sitting next to Dinius in the cockpit? If the prosecution believed the lights were off, then the Captain would be responsible. Isn't charging Dinius for the collision like charging the guy who was steering the Exxon Valdez and not its captain?

Haltom: That's a good point. Bismarck was charged with being the operator of the sailboat. Even the judge commented after the trial but before the jury started its deliberation that this [California] law was not written for sailboats; it was written for cars. Chilcott made the point that you don't drive a sailboat, you sail a sailboat and the master is the one running the show. Bismarck was crew. Some of the jury told us afterward that this was a very important point to them.

Seaworthy: Bismarck, was there anything you could have done differently that might have prevented the accident?

Dinius: I think back about that constantly. I don't remember the collision; when I finally come to I was in the Sutter Lakeside Hospital about four or five hours after the accident. I had a tennis ball size knot on my head for three months. I've had to learn about the details of the case along with everybody else.

[One of the passengers on the sailboat] told me she said 'Oh my god, a boat's going to hit us' a fraction of second before impact. I asked myself 'why didn't I hear it?' The boat had just come around a point and came directly at us very quickly. I think it must have been the physics of sound traveling toward us. We were barely moving; there was nothing I could have done. My conscience is clear.

Seaworthy: One thing that puzzled everyone who followed this trial — Why didn't the prosecution call Russell Perdock as a witness? Wouldn't he have been the best person to explain the prosecution's side of the story?

Haltom: Everybody was expecting Perdock to be called to the stand. Throughout the trial, the judge would ask us at the end of the day who our witnesses were going to be on the following day. On the day before the prosecution rested its case, Hopkins [the prosecutor in the case] had said he was going to call Perdock. He was going to be the last witness and we set aside most of the day for him.

So on the last day when Hopkins announced he was resting without calling Perdock, everybody's jaw dropped. It was a stunning moment. If there had been a strong case, Perdock should have been his most important witness. It raised a question mark.

One problem may have been Perdock's credibility. In my closing argument I did a power point saying he is a proven liar. Perdock said under oath that he had come from his home and gone directly to the boat. We found five people who said that he'd been at Konocti [a bar] that night shortly before he went out on the boat. Those five people put him at Konocti independently. Three saw him there. Two heard statements by Perdock and others demonstrating that he had been there. Those five people who saw him didn't know each other. To say [as the prosecution did] that those five came together and cooked this up is just nutty. He also lied about the timeline of his activities on the day of the accident. Perdock's ex-wife said he was a liar. Lights may have been the biggest thing, but Perdock's lack of credibility also loomed large and I think the prosecution not calling Perdock as a witness was huge.

Seaworthy: Do you think Perdock had been drinking alcohol?

Haltom: With the evidence of him having been at Konocti Harbor, I think the answer is yes. If he hadn't been drinking, why else would he have lied? It doesn't make any sense. You'll also remember that Perdock wasn't given a Breathalyzer test at the scene. The policeman, James Beland, who had tried to administer the test, said he was fired because he didn't tow the party line. [The Lake County Sheriff's Department] did an internal affairs investigation where most of the allegations against him pertained to this case. There were a couple others, which were minor. He was an ex-marine who had been in the Lake Country Sheriff's office for many years. As soon as he came forward to say that he was ordered not to give a Breathalyzer test to Perdock, they started all of these different investigations and he gets fired. When Beland and Perdock testified at the preliminary hearing, they had two different stories. They disagreed about the time frame. It was obvious that somebody was lying.

Other deputies — I can't name names — provided us with support and information throughout the trial. There was also an off duty officer who came up from Tuolumne County to take us out on the lake and recreate the events leading up to the accident. He and others volunteered their time to help Dinius.

Seaworthy: A lot of people seemed to recognize that the wrong person stood trial. Even Lynn Thorton's family said the wrong person was being charged. Why didn't the legal system prevent this case from going to trial?

Dinius: In April 2007, I got the call from a County investigator and he said I'd been charged with misdemeanor manslaughter and was going to have to turn myself in. I had talked to Victor about legal action, but it shocked me not only that I'd been charged but that I was the only one being charged. I spent a day in jail.

There were a number of times it could have gone away. The judges could have made it go away but they didn't. Judge Martin had a chance to do it at the [preliminary hearing], and other judges had chances to get rid of the case when we tried to recuse the Lake County District Attorney's Office. Probably the occasion before trial when I was most optimistic was in May of 2009, when the prosecutor's office came out with exculpatory evidence while we were in court. I thought for sure they were going to throw in the towel, but it didn't happen.

Seaworthy: Given the testimony during the trial had gone well for you — the evidence was clearly in your favor — were you confident when the jury walked back in the courtroom to give its verdict?

Dinius: I had been confident about the outcome, but when you're looking at 12 jurors who hold your fate in their hands, I became a little anxious.

Seaworthy: One last question. Are you going to pursue a case against the Lake Country Sheriff's Office?

Dinius: Right now I'm relishing getting these charges off of my back. At some point Victor and I will talk about what our options are. I'm still heavily in debt.