A Life Of Service And Sailing 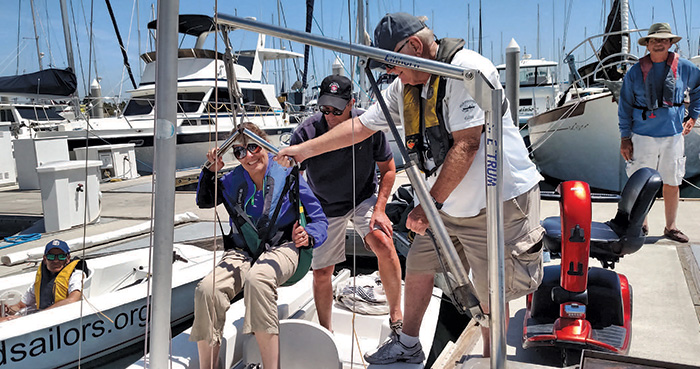 Challenged Sailors volunteers Bob Dillon, left, and Doug Shaw use the dockside hoist to assist participant Sue Taetzsch to board her boat as her sailing companion Joe Halsted stands by on the dock. | Photo Credit: Nicole Sours Larson

On most Fridays and Saturdays, Sylvia Bate-Swall is on the docks at San Diego's Sunroad Resort Marina on Harbor Island, helping disabled sailors experience the joy, freedom, and exhilaration of controlling their own small sailboats. Through the nonprofit Challenged Sailors (CS) adaptive sailing program, many participants who have lost control over multiple aspects of their lives are able to rebuild their self-confidence through the organization's sailing activities.

Four years ago Silvia and her husband, Mike Swall, along with several other volunteers, rescued the adaptive sailing program, originally part of the foundering disabled sailing organization Challenged America. They invested their own money to pay dockage, insurance, and operational costs to restart its activities and protect its eight Martin 16s, specially designed for sailors with limited mobility, until they could reorganize as a new nonprofit, renamed Challenged Sailors.

Program participants have a range of disabilities. Some are blind, deaf, or autistic. Others suffer from degenerative illnesses. Still others are amputees, cancer or spinal-cord injury survivors, or veterans with post-traumatic stress disorder or severe injuries. All are accompanied in CS's Martin 16s by volunteers from the organization's pool of about 50 regular companion sailors, many of whom return week after week for the satisfaction of helping others regain a measure of independence on the water. 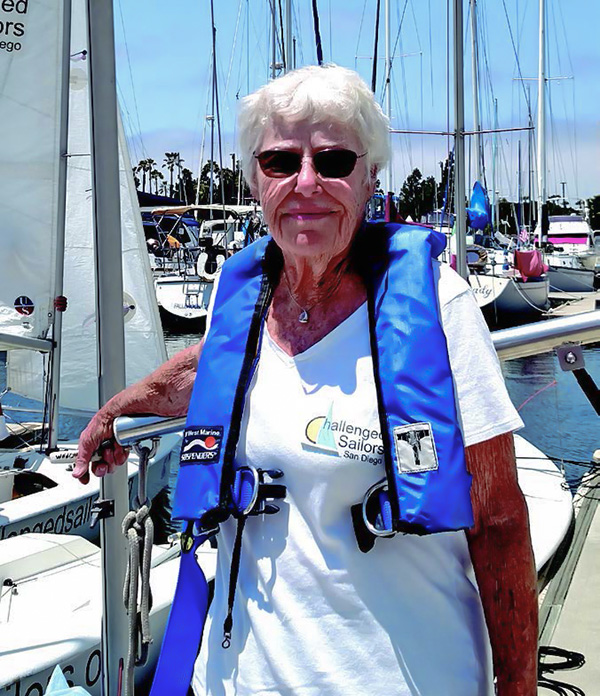 Bate-Swall initially got involved in adaptive sailing by chance. She and her husband took a blind friend sailing on their 39-foot sloop, Kiwi. Their friend fell in love with sailing, discovered Challenged America's disabled sailing program, and asked her sailing mentor to accompany her as her "eyes." Bate-Swall began volunteering in 2003 and hasn't stopped. Now 86, she considers founding CS her crowning achievement. But in truth, it's only one of many highlights from a life lived by the water, a witness to much of San Diego's evolution as a boating and maritime center.

Born in San Diego as the only child of a commercial fisherman and boatbuilder, she grew up within sight of the water and has sailed all her life. Her father built all the family boats, including an early 22-foot speedboat with inboard engine.

"I remember my dad helping me build a model boat in the garage when I was about 4. My dad taught me to work on things," she recalls.

As a young woman, she found herself divorced with two young children and needing a better job. She heard that the San Diego Police Department was hiring its first "policewomen." She applied, took the exam, and became the city's seventh policewoman in 1956.

A love of boating brought her together with her second husband, John Bate, then the city's second port director. They married and lived mostly on their boat on San Diego Bay, as Bate pushed his vision to develop a strip of land made from dredge spoils now known collectively as Shelter Island and Harbor Island. As they were being developed in the 1950s, locals derided them as "Bate's Folly" and "Bate's White Elephant."

The Port District has since reshaped and revitalized the San Diego Bay waterfront. Bate retired in 1966, and she and John took two extended voyages through Mexico on their boat. Although they later divorced, she remained his strongest advocate and guardian of his legacy.

She and current husband Mike Swall, owned and sailed a 39-foot New Zealand-built sloop for 25 years. Swall does much of the maintenance and repairs for the Martin 16s, and both also volunteer for the San Diego Maritime Museum. Now the couple spends many of their days recruiting new participants and volunteers and raising money to ensure CS can continue to provide sailing opportunities to those whose lives it enriches.