The next big named storm to make landfall is a question of when, not if. Coastal boaters should prepare because hurricane season is here. In this special section, our editors have created a comprehensive, step-by-step guide to help you to protect your boat.

In an average year, two hurricanes will come ashore somewhere along the Gulf or Atlantic coast, destroying homes, sinking boats, and turning people's lives topsy-turvy for weeks or months. Since 2016, the U.S. has been hit by four powerful Category 4 hurricanes of 130-mph-plus — Harvey, Irma, Maria, and Michael, which strengthened to a Cat 5 storm, the most powerful ever to hit the Florida Panhandle, and demolished 150 years of records. Florida is struck most often, but every coastal state is a potential target. 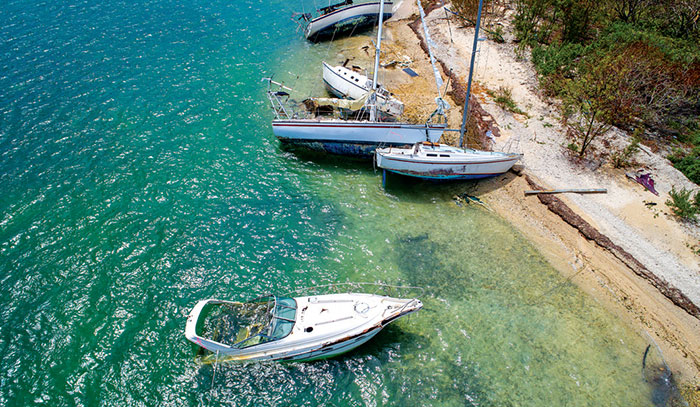 Hurricanes combine high winds, heavy rains, and several feet of surge. Your hurricane plan needs to take all of this into consideration. | Photo Credit: Getty Images/FelixMizioxnikov

Experts predict that tropical storms will be stronger and contain even more rainfall in the future, coupled with higher water levels. Experts also warn that after a number of storm-free years, people in some of the vulnerable areas may become less wary of a storm's potential fury. But to residents of the Carolinas crippled by Florence, and people in Florida ravaged by Michael last year, the hurricane threat won't soon be forgotten.

Our BoatUS editors, working with our hurricane experts in BoatUS Claims, have created the 2019 BoatUS Magazine Hurricane Preparation Guide — plus clear, how-to videos, to help you prepare if a major storm is headed your way. The more you know and plan ahead, the better your chances of protecting your boat and property. Read the articles below to learn more.

What To Expect From A Hurricane

Preparing a boat for a hurricane means defending against wind, rain, waves, and high water — all in proportions rarely experienced by boaters.

Where To Keep Your Boat During A Hurricane

How To Find And Fix Potential Breaking Points On Your Boat

The fate of your boat's security in a storm comes down to these essential and critical points in your defense strategy. Addressing them early could mean the difference between your boat surviving a serious storm, or breaking free, hitting hard objects, filling with water, and sustaining catastrophic damage.

How To Develop A Hurricane Prep Plan

It's said that every minute you spend planning saves 10 minutes in execution. When a hurricane threatens, you’ll be glad your plan is ready to go.

What To Do After A Hurricane

After a storm has passed and authorities are allowing travel, get to your boat quickly. It's your responsibility to protect your boat from further damage, and its equipment from theft, regardless of its condition.

These boat owners aggressively prepped their boat for survival at the dock using proven techniques as powerful Hurricane Florence zeroed in. Here’s their dramatic firsthand story.