Dr. Vic Stime: A Visit From The Tooth Ferry

A dentist spends his retirement delivering his skills — by boat — to people in remote Alaskan villages. 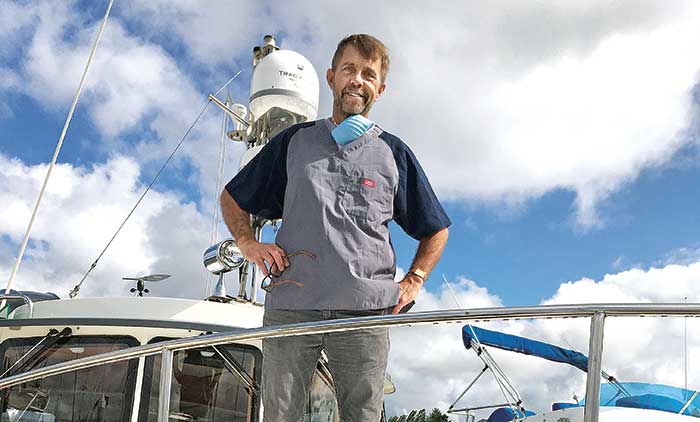 It's a beautiful summer day in Myer's Chuck, a tiny village on a peninsula off Union Bay in southeast Alaska. An eagle soars overhead across the morning sun, and a salmon jumps nearby. A gentle breeze blows and small wavelets lap against the hull of a Ranger Tug as the peace of the cove is interrupted only by the soft whine of ... a dental drill?

That would be Dr. Vic Stime, floating dentist to the underserved populations of southeast Alaska. Stime, 62, retired after almost 30 years as a dentist in Spokane, Washington, when a heart condition forced him to slow down. He decided to follow his longtime dream to be a traveling dentist, visiting by boat the smaller communities in southeast Alaska that don't have regular access to dental care.

For six weeks every summer, Stime travels from Ketchikan to remote villages such as Thorn Bay, Port Protection, and Tom's Place (population 25), where he performs cleanings, fillings, extractions, and more in the cockpit of his boat, assisted by his nephew, Luke, who also happens to be the assistant harbormaster in Tofina on nearby Vancouver Island.

Stime picked the 31-foot Ranger Tug for his floating dental office because of the size of the cockpit, which also has a large overhang for protection against the frequent inclement weather that southeast Alaska is known for, even in summer. Last year, he says, it rained at least part of every day.

His boat, appropriately named Offshore Drilling, is outfitted with a portable dental chair, a compressor to power the drills and suction, an autoclave, and even a portable X-ray machine that connects to his laptop. His onboard generator powers the equipment. The chair can be folded and stowed on deck between visits. 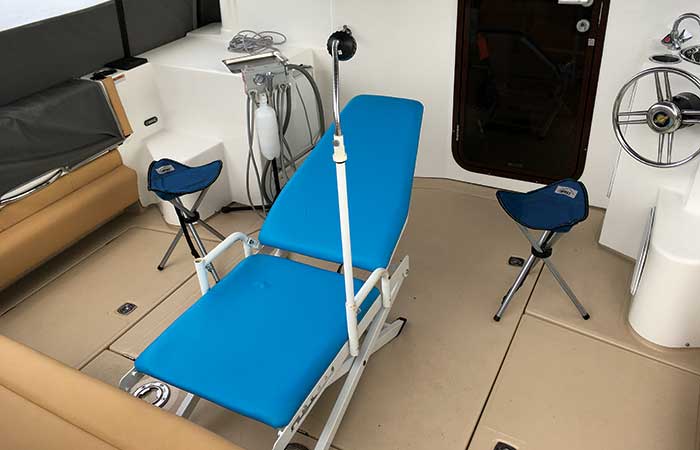 A portable dental chair can be stowed when not in use.

Stime says the boat is also well equipped to handle the occasional blow; the trip from Port Hardy to Calvert Island can be challenging, at times with 8-foot seas. Mostly, Stime simply docks at a small village for two or three days and hangs out a sign for those who didn't make an appointment on his Facebook page. Word gets around and he's usually pretty busy, sometimes with a line waiting to see him. Some smaller places don't even have a dock, so he anchors out and his patients come to him by boat.

While most pay for his services just like they would any other dentist, Stime won't turn away a patient because he or she can't pay. His patients run the gamut from wealthy, insured residents of Coffman Cove, to cruise ship crew, to local Inuit who can't afford to pay for healthy teeth. (He'll assist with insurance billing for those who have it.) His practice is simple and limited to general dentistry, and he can't perform lab procedures. "I'm pretty much the end of the line for most of my patients," he says.

One time, a woman came to him after a massive procedure by another dentist (who only visits every few months) had gone very wrong. Several extractions hadn't healed, the patient was in terrible pain, and Stime had to resuture the entire inside of her mouth. In most places he goes, there's no way for people to get dental care without taking a ferry or plane to a larger city, which can cost several hundred dollars, and take all day. 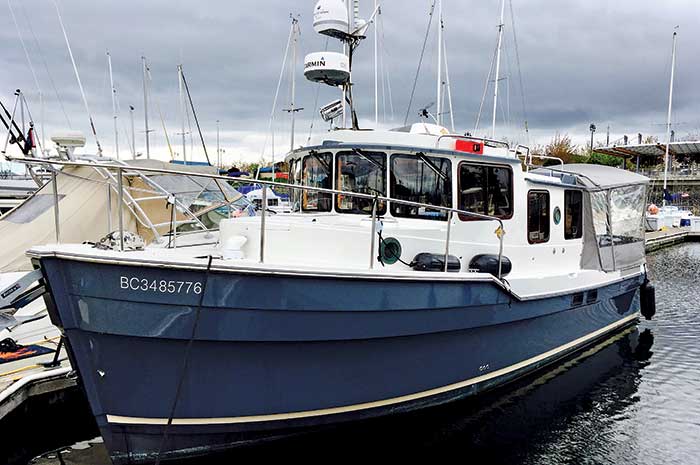 Stime docks or anchors his Ranger Tug in small villages for a few days at a time.

Stime says doing this work lets him combine his love of boating, dentistry, and especially fishing. He's been fishing the local waters for salmon and halibut for almost 30 years in small boats and larger charters. When traveling between villages, he always tosses out a line.

Stime says that the most rewarding part of his job is when patients tell him they've needed a dentist for a long time and didn't know how they would ever get dental care; they're always grateful to see one in their remote area.

While working in retirement seems like an oxymoron, Stime says, "I love it. And I have the best view of any dental office anywhere."