Biobutanol is an ideal substitute for the engine-damaging ethanol that boaters have been forced to use. What is it, and when will we see it in marinas? 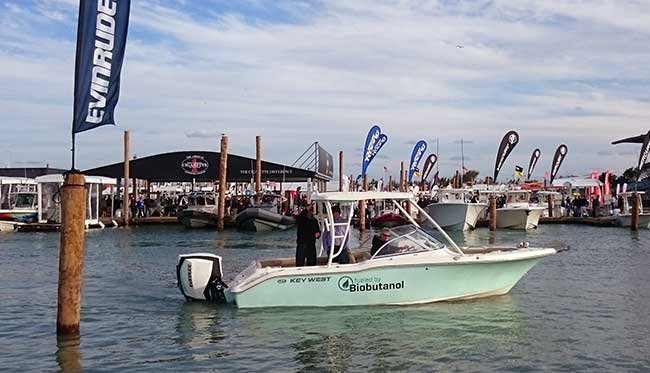 Biobutanol, an alcohol derived from fermented biomass, is a safe and effective alternative to ethanol for boat engines.

Back in 2005, BoatUS began getting angry calls about poorly running engines and engine damage caused by gasoline with added ethanol. Soon after, more calls came in about damaged fiberglass gas tanks from boaters who used E10 (gasoline with 10-percent ethanol). Something was seriously wrong with this new fuel when it got into boats. BoatUS began investigating and writing about the issue in 2006, and people in the industry began to take note.

One of those industry insiders was John McKnight, Senior Vice President of Government Relations with the National Marine Manufacturers Association (NMMA). Among other things, McKnight knows the ins and outs of government regulations and has helped engine manufacturers comply with them. Our BoatUS Government Affairs team shared what we were learning from our members, and McKnight agreed that it could be big trouble for the boating industry. When it was apparent that ethanol was here to stay, McKnight starting digging around to see if there was a substitute that could be used instead of ethanol, something that didn't have ethanol's damaging side effects. (For background on ethanol, what it is, and how boaters got saddled with it, see "Too Much Ethanol: How We Got Here" below.)

Too Much Ethanol: How We Got Here

Under a 2005 law that created the Renewable Fuel Standard (RFS) — in an effort to increase the amount of renewable fuels we use in our day-to-day lives and decrease the amount of pollution from fossil fuels — Congress set an annually increasing fixed number of gallons of ethanol that must be blended into the nation's fuel supply every year. Substantially expanded in a subsequent bill in 2007, RFS set a hard number of gallons, not a percentage, of overall gas demand, to be used by certain target dates. At the time, experts assumed gasoline use would steadily increase. However, as the nation became more energy conscious, and more fuel-efficient vehicles were introduced, the opposite happened; fossil fuel consumption began to drop. We've now hit what's known as "the blend wall," where the RFS-mandated number of gallons of ethanol has turned out to be disproportionately too high.

Foreseeing the looming blend wall back in 2010, powerful ethanol advocates convinced EPA to split the nation's fuel supply, allowing gasoline with 15-percent ethanol into the marketplace despite its incompatibility with millions of engines. Now, despite extensive testing that has shown that E15 can severely damage today's inboard and outboard boat engines (and void warranties), it is sold in 24 states. While boaters and the boating industry have learned to live with E10, albeit uncomfortably, the higher blend is loathed and actually illegal for use in boats and most small engines, as well as cars built before 2001.

With E15 ever more widely available, and 95 percent of boaters filling their tanks at roadside gas stations, the chances of inadvertently filling up with engine-damaging ethanol are magnified. With the advent of E15, it's even more critical that better fuels that won't damage boat engines are made available.

Here's the problem: Ethanol loves water and will absorb it from any source, even right from the air. When E10 absorbs enough water, the ethanol and water separate and sink to the bottom of the tank, where the fuel pick-up sucks it up, causing stalling or even engine damage. The gas that's left after separation also is no good because the lack of ethanol lowers its octane, which can seriously damage an engine.

But that's not the end of the problem. Ethanol is also corrosive and a solvent, which means it "cleans" gunk from an engine's fuel system. This clogs engine filters, making engines stall, sometimes at inopportune times. Ethanol can also destroy old fuel hoses and damage carburetors. If that's not bad enough, fiberglass gas tanks can and have been destroyed by even small amounts of ethanol in gasoline.

"After E10 was introduced in the mid-2000s," reports David Kennedy, manager of the BoatUS Government Affairs team, "owners of older Bertrams and other boats with fiberglass gas tanks reported to BoatUS that they were seeing black crud in the intake manifolds that eventually caused pushrods to bind and fail, often requiring a new engine. BoatUS in turn sponsored tests that proved the issue was caused by ethanol."

Ever since those early days, BoatUS has been warning our members consistently about the problems with using higher ethanol blends in their boats and advocating for an available, affordable supply of safe fuel. While new boat engines can withstand anything up to E10, many boaters prefer gasoline that doesn't have any of the risks, such as phase separation, associated with ethanol.

So McKnight, along with others in the marine industry, set out to find a solution that engine makers could support. Biobutanol (see "What is biobutanol?" below) topped the list for many reasons: Itdoesn't attract water, it's not very corrosive, and it won't destroy fuel tanks or engines. It sounded like the perfect fuel for boaters. The American Boat & Yacht Council (ABYC), which sets the standards for boat safety, also became interested. But McKnight needed proof before he could tell the marine engine manufacturers that this new fuel was a harmless replacement for ethanol.

Like ethanol, biobutanol is an alcohol. But it doesn't share ethanol's affinity for water and is not as strong a solvent — two things that make it much better than ethanol for boats. It can be produced from agricultural waste products, such as corn stalks, or from switchgrass and wood chips, as well as corn. Its energy content is higher than ethanol, and it can be produced in the same facilities as ethanol. B16 contains 16.1 percent biobutanol, which gives it the equivalent oxygen content of E10.

He contacted Jeff Wasil, an engineering technical expert at Evinrude, and they decided that they needed to thoroughly test what's known as B16 — gasoline with 16.1 percent biobutanol — in marine engines. Fuel testing is expensive, so they needed funding to expand beyond their preliminary investigation. The U.S. Department of Energy (DOE) initially said it couldn't help pay for testing. After more searching, ABYC was provided funds from a U.S. Coast Guard grant to test B16 on boat engines.

In 2013, the group from ABYC, NMMA, and Evinrude tested the fuel on both outboard and inboard engines, then presented the results in a paper to the Society of Automotive Engineers. This eventually came to the attention of the DOE and Argonne National Laboratory, which together decided there was now strong basis to join in further testing. McKnight claims there is no fuel that has had as much testing and validation as B16 on boat engines.

"Five years ago we investigated how biobutanol would work in one of our outboards, and its properties seemed much better suited for marine engines," Evinrude's Wasil said. "We found no appreciable changes in emissions, and because you get more energy without more pollution, this fuel appeared to be more compatible with marine engines." Following the extensive marine-industry and government biobutanol test program, in 2015 NMMA approved the use of biobutanol fuel blends up to 16.1 percent by volume for all marine engines and boats.

With a potential cure for ethanol-induced headaches in hand, why not start adding biobutanol to gas right now and help boaters who have for years been burdened by having a fuel they don't want? Wasil says it's because the public policy deck is stacked against any fuel that's not ethanol. The ethanol industry has a powerful political lobby with an influence that goes further than just promoting its product. For instance, in the past, ethanol producers were given low-interest loans and substantial subsidies that allowed large-scale production of their product, something no longer available to newer competitors.

"But that's just the beginning of the uphill battle for biobutanol," says Kennedy. "Right now the ethanol industry has put in an application for a waiver to eliminate long-standing Environmental Protection Agency (EPA) regulations that prohibit high-evaporative emissions in gasoline during summer months. If that's granted, it will eliminate one more incentive for these companies to lower emissions. Biobutanol already has low emissions."

Another challenge for biobutanol, according to Wasil, is that while auto manufacturers approve the use of 16.1 percent biobutanol, EPA has only given approval for 12.5 percent in cars, because it hasn't given the biobutanol industry a waiver for higher oxygen content like it has with E10 and E15. That makes it much harder for biobutanol producers to make a profit. B16 is considered an off-road fuel and is approved by EPA for boats, but that only accounts for a small fraction of gasoline use in the U.S. 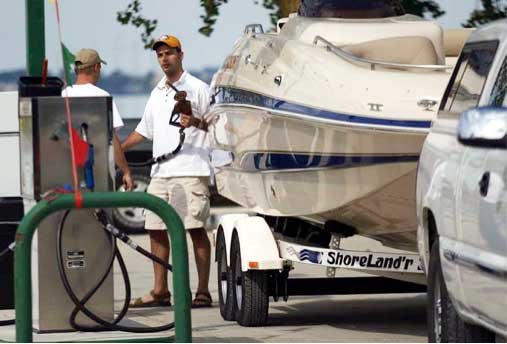 "The biobutanol industry has asked EPA for an increase in the percentage approved for use in cars," says Kennedy, "but there has been no action yet." Meanwhile, as mandates for the amount of conventional biofuel (ethanol) levels required in the nation's fuel supply increased, EPA used its waiver authority to reduce advanced biofuel-mandated levels, making it even harder for newer biofuels to come to market, and keeping the problematic conventional corn-based ethanol as the main biofuel option. The political deck seems firmly stacked against any nonethanol renewable fuel.

Where We Stand Now

"If these roadblocks can be overcome, biobutanol has real advantages, not just for boaters, but for manufacturers, distributors, and retailers," says Kennedy. For starters, existing ethanol plants can be converted to produce biobutanol, which eventually can be made without using corn. Ethanol production is more efficient than biobutanol production, which is probably a big reason ethanol plants don't want to switch, though biobutanol is more environmentally friendly and can be made from things like switchgrass and other less resource-intensive crops than corn. One big advantage biobutanol has is that it can be shipped through pipelines, unlike ethanol, which must be trucked, so it's cheaper to transport. Marine retailers can simply use it in place of ethanol fuels using the same storage tanks.

Where does that leave boaters today? While the inroads so far are small, there's light at the end of the tunnel. Gulf Oil already sells B16 at several East Coast marinas, and many stations that advertise ethanol-free gasoline are actually using B16. Marine gas-dock owners across the country say they would like to sell B16, and many of their customers are willing to pay a premium for ethanol-free gas.

"If the demand for biobutanol can be increased, the capacity will go up, and the price will likely drop," says Kennedy, "making it a much more attractive alternative to ethanol." For now, boaters need to remain vigilant about putting only E10 or ethanol-free fuel in their boats. There is only one small label on E15 (gas with 15 percent ethanol) pumps, and often it is the lowest priced option. BoatUS continues to advocate for reform of the Renewable Fuel Standard and greater support for alternatives like biobutanol. Keep on watch for Action Alerts from the BoatUS Government Affairs team on this and other critical boating issues, or visit Advocacy.BoatUS.com for the latest information.