It seems straightforward. The best way not to get run over by a merchant ship is to get out of the way. Quickly. 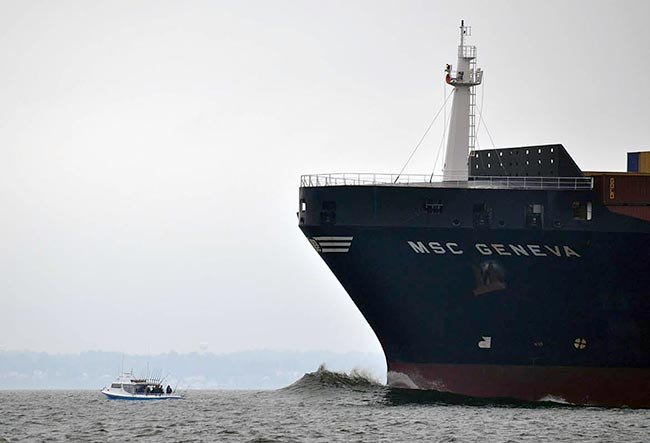 On a working waterfront, it's called the law of gross tonnage, and the bigger ship always wins. To an observer, this might seem simple. Seen from the deck of a smaller boat, larger ships lumber along at a glacial pace. Plenty of time to zip out of the way, or dart past. It's like driving a school bus through a flock of sparrows — the birds will get out of the way, right?

Talk to someone who has to pilot a big ship into a crowded harbor, though, and it doesn't seem that easy. "It's getting worse," says Bill McGovern. "It's just been getting so bad that the Coast Guard and others are starting to take notice." McGovern is a pilot. He works for the Sandy Hook Pilots, based in Staten Island, New York. McGovern started in 1982, and he guides about 170 ships a year to one of the busiest harbors in the country. "Sometimes it's so crowded with fishing boats," he says, "you can't even see the buoys."

It is safe to say that McGovern has seen more than his share of head-slapping stupidity, but despite that, he remains optimistic. In his spare time, he visits local yacht clubs and marinas to educate boaters on how to stay safely out of his way. The stakes are high for everyone involved. Last year in Philadelphia, a tugboat mate was sentenced to prison after the barge he was towing ran over a tourist duck boat, killing two people. In 2009, a pilot on a tanker went to prison after his ship hit a bridge in San Francisco Bay, spilling 58,000 gallons of oil. In those cases, the courts determined that the big ships were at fault, but McGovern says close calls happen with alarming frequency, and in the crowded inland waterways where he works, a misstep on a tanker or container ship can be disastrous.

"It takes a beautiful sunny day — should be a relaxing day for a pilot — and I can feel my heart beating out the side of my head," McGovern says. "I feel like I can take my pulse on the side of my temple because I don't want to kill anyone."

An expansion of the Panama Canal means ships are getting bigger, and it also leaves pilots like McGovern with less room for error. Even a tall bridge, like the Verrazano-Narrows, which is over 200 feet, requires a big merchant ship to pass through the center span. Ships often come in with the high water, which means the current is running behind them, propelling them forward, and speed is of the essence to maintain steerage, but also to stay on schedule. "Time is money in this industry," he says, "huge money. We're going as fast as we can."

Meeting a small boat in a narrow channel, he says, the pilot's choices are limited. Draft constraints make going outside the buoys an untenable option, unless he wants to end up like the San Francisco pilot. Backing down on the engines means a loss of steerage; cutting the engines mean the ship's momentum will take over, and a loaded tanker can go for miles. Even with the ship's engines running right, it can "take a shear," he says, and slide sideways in the current. "It happens all the time; you really have no control, and that ship could kill somebody."

Last year, he recalls, another pilot had a close encounter near the Verrazano-Narrows Bridge with a boat towing a child in an inner tube. The smaller boat approached from behind, went close up the side of the ship, then crossed in front and sped back down the other side. "I didn't know whether to call the Coast Guard or [family services]," McGovern says.

The problem is visibility. Once you're closer than 500 meters (1,640 feet), he can't see you anymore. "To you in a small boat it looks like 'Oh, I've got time, that ship isn't really moving too fast'" he says. "If we're doing 15 knots, we can be on you in minutes. Once I lose sight of you, there's nothing I can do. I can't go to the left or the right, and if your engine doesn't start, I can't do anything, because I can't see you. If you go left and I go to my right, and we're facing each other, I've just contributed to the collision."

Two miles is a good distance, he says. It gives the ship time to react, and it gives the boater time to get out of the way. "Two miles gives us about 10 minutes. If anything goes wrong, two miles will seem like nothing." In that 10 minutes, a lot can go wrong.

Anchoring in a channel is illegal, McGovern says, but more importantly, it can endanger your life. Even dead in the water, he says, a boat stands a better chance just bobbing around than it does anchored. The current may push it out of the channel, and if it doesn't, the ship might. To hear the pilot tell it, this is a rule that gets broken fairly often. Sometimes the small boat operators don't even seem to notice. A few years ago, a ship he was piloting met another ship in a turn. It was crowded with small boats, and most of them got out of the way, except for a small wooden boat.

"I'm blowing the whistle," he recalls. "I'm going hard left, then hard right. It was an older couple, and the man was up walking around. The woman was wearing a large hat — I never even noticed the woman in the boat. She never even looked up! She sat in a chair the whole time! I could've spit on her head, and I don't spit well. I'm up 110 feet, looking down and she never even looked up. And it wasn't like afterward they pulled up their anchor and moved. They just sat there.

"The big thing is, when you're in a boat and you're not moving, I don't know what's going through your mind," he says. "I don't know if you're suicidal, you're a terrorist, or you're a freaking moron; I don't know what's going on." The best way to communicate with an oncoming ship is the VHF radio. On inland waterways, merchant ships monitor Channel 13, but often when McGovern tries to call a small boat, he doesn't get an answer. If you don't have a radio, get on deck and start waving something bright. The odds are good that the pilot is already watching you through binoculars, trying to figure out if your anchor is down, or if you even notice them. If they think you're in trouble, no one can tell the Coast Guard where you are better than a trained pilot. If they can't tell what you're doing, the next thing you hear may be five short blasts of the horn. That's bad.

"Five whistles do not mean hello," McGovern deadpans. "If a ship is blowing its whistle at you, it means you're in danger." If there's a ship between you and the other side of the channel, it's best to wait it out, crossing after the larger vessel has passed. Tugboats and barges present a particular danger to recreational boaters. The lights can be hard to recognize at night, and McGovern says people have been killed trying to cross between a tug and its tow. Boaters should watch not only for the masthead towing lights on the tug, but the navigation lights on the barge itself, which may be some distance behind.

Becoming a pilot takes years. Sandy Hook pilots, like McGovern, serve as apprentices for seven and a half years, then work as deputy pilots for seven more. A mistake can mean the loss of their livelihood or even prison time. "This is all I know," he says. "This is my one expertise."

McGovern says he's tried to get local boating safety courses to include a section on avoiding merchant ships, but so far he's been unsuccessful. For now, the best he can do is talk to boaters at yacht clubs and fishing groups, or yell at them individually as he passes, to convince them it's in everyone's best interest to avoid a collision. Sometimes they don't get the message. There was the kid fishing with a bunch of teenagers, who didn't look up, exactly, but slowly extended his free arm in a familiar, one-fingered hand gesture ("I was going out there to yell at him, but after that …"), or the sailors he speaks to who believe they have the right of way over powerboats, regardless of size (not over a vessel constrained by its draft). More often, he says, people just don't understand the stakes, like the guy at a recent presentation who asked him "Do I have to move?" It's the law, McGovern told him, but ultimately, no.

"This is America," he said. "You can sit right there and stare at my bow the whole time."

How To Avoid Huge Ships, The Short Version

1. Stay out of the channel. Unless you need to be there, leave the deeper water for those who need it. Never anchor in the channel.

2. Get out of the ship's way. If an approaching ship is within two miles, make a move for the side of the channel — the outside, if circumstances permit, otherwise as close to the edge as possible.

3. Don't cut off a ship. If you're crossing the channel, wait for the ship to pass, and if it's a tugboat, watch for a tow behind it.

4. Let the ship know what you're doing. If there's shipping traffic, monitor and use Channel 13 on your VHF to communicate.

5. Let the ship know if you're having trouble. If the engine won't start, or you can't move for any reason, call them on the radio or get on deck and start waving. Odds are, they're already watching you.

6. Radar reflectors are great. An Automatic Identification System (AIS) is great, too. Even if you have them, though, you'll still need to keep a lookout.