Much of the skill of anchoring comes down to assessing conditions. Here's advice on choosing an anchorage for peaceful nights aboard, or for a day idling on the hook. 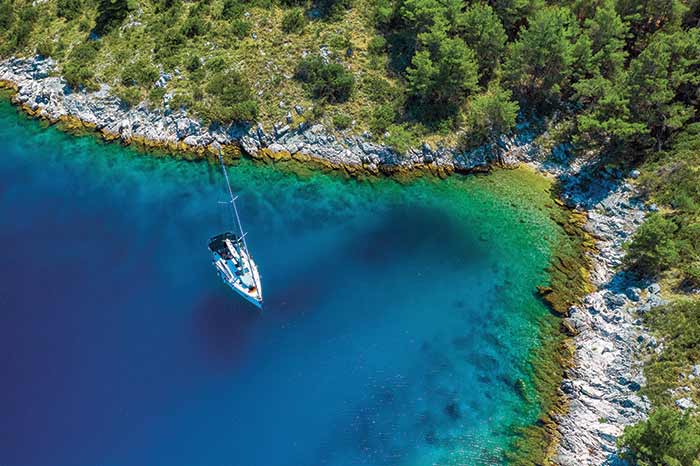 Before you arrive at an anchorage, study the chart to gain valuable information on depth, the type of bottom, and any navigational hazards. Pilot and guidebooks often carry additional info on anchorages, sometimes with photographs — aerial photos are especially useful. Many are written by cruisers and boaters who know the area well and have local knowledge.

Before dropping anchor in a new area, check your chart to make sure that the bottom offers something your anchor can grab and is clear of obstructions such as rocks, coral heads, or sea grass. Most charts have abbreviations that identify the type of bottom and any characteristics, such as kelp, mud, or rock. If the chart says the bottom is "hard," your mud anchor may not set. The meanings of the abbreviations are usually shown in a legend box on the chart.

Always Anchor From The Bow

Our GEICO insurance files reveal sinkings of small boats that were anchored from the stern, something usually done for convenience while fishing. It's a bad idea. In most cases, the boats filled with water from waves or a wake coming over the already low transom of an outboard-powered boat and the boat capsized. The bow is the strongest part of a boat, most able to withstand and ride up and over waves. It should be the only place an anchor is tied on a small boat.

Check how many boats, if any, are already anchored. Will there be room for you, too, while allowing safe 360-degree swinging room for your boat and those around you? Seeing other boats already anchored may a be a good indicator that the anchorage is safe, but not always. The prudent skipper must make his or her own decisions. If the anchorage looks crowded when you arrive, it may be best to find an alternative.

Choose an anchor spot like you'd circle a parking lot in your car, looking for just the right space. This will ensure that you've assessed the real depth all around your potential swinging radius. This is the frame of mind you should be in when anchoring. But don't circle too close to other boats or so close that you could run over their anchor rodes.

Good manners dictate that you don't want to anchor too close to other boats. You need to consider that boats will swing as the tide changes or wind shifts, so you need to be far enough away that, when you all swing, you won't bump into other boats in the middle of the night. Remember, some boats react differently to wind and current and thus swing differently. Boats typically oscillate to the wind every 1 to 5 minutes and not at the same time, which means the entire anchorage might look different every few minutes. So take your time to select your spot.

It's a great idea to ask other boats in the anchorage for advice. Call them on the radio or, if crew are on deck and there's space, go slowly by and ask if there's any reason for not dropping the hook in the spot you've picked. They could be locals and have useful knowledge to share. 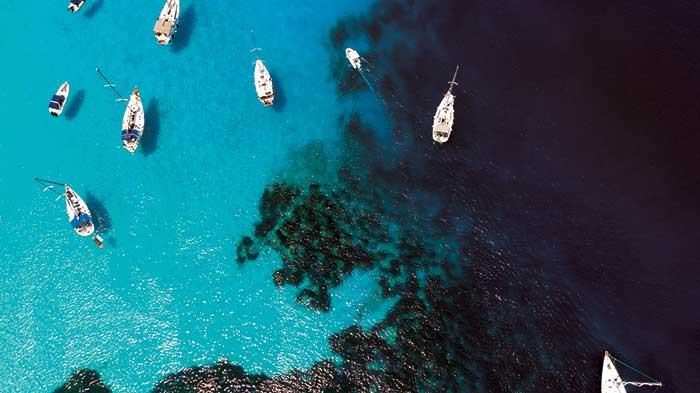 1. Come in VERY slowly. Wakes are a no-no in any anchorage. Don't make one.

2. Pass BEHIND anchored boats when you're weaving your way through an anchorage. It's nerve-wracking to see someone passing right over where you know your anchor line is.

3. Avoid blinding fellow boaters at night with a million-watt spotlight. Keep your light aimed low, proceed slowly, have all your own running lights on, and keep voices low and clear.

4. First boat sets the precedent. Anchoring is on a first-come, first-served basis. Boats that come in later need to respect the space needs and 360-degree swinging room (with rode stretched out) of all the other boats there. If there's simply no room, don't try to squeeze in; find another anchorage. The opposite also holds true: If there's plenty of room in an anchorage, don't anchor close to another boat; give them privacy and peace.

5. Use a minimum of 5-to-1 scope, unless more is needed. Check in with those nearby. If they've used 5-to-1 scope, and for safety overnight you need to use more, discuss it with boats already anchored near you. Otherwise, when the wind shifts, you may swing over and be on top of them, likely hitting them. Ideally, an anchorage of boats should swing around together if they have similar bottom and windage characteristics. But you can't rely on this.

6. Once the hook is down, don't hop in the dinghy. Nothing screams "inexperienced" louder than leaving the boat before it has settled back and really set its hook. If you're ashore with a poorly set anchor, you'll likely be responsible for the slow-motion pinball game that ensues.

7. Sound carries farther on the water. Dogs barking, generators running, and TVs and music blaring are obvious no-nos. But water can transmit even quieter sounds, especially after dark. Cellphone conversations in the cockpit, loud talking and laughing late into the night, and amorous encounters can all be heard by a sizable part of the anchorage. If you must run a genset, anchor near boats similarly equipped, and select a time of day when most folks are ashore, never during cocktail hour or quiet evening time.

8. Scent carries. Perhaps the worst thing a boater can do is pump the head overboard in an anchorage. Not only is it usually illegal, it smells and is a safety hazard for swimmers, even many hours later. Use the pumpouts.

As wind speed doubles, its force quadruples, so ideally you want the wind coming off the land, to give you protection. This way, not only will the fetch (length of water wind blows without obstruction) be minimized, but the boat will blow away from shore, minimizing waves. Avoid anchoring in a location where the wind is blowing onto shore, called a "lee shore," a potentially dangerous situation as waves could be larger and the boat could be blown onto the beach should the anchor let go or drag. 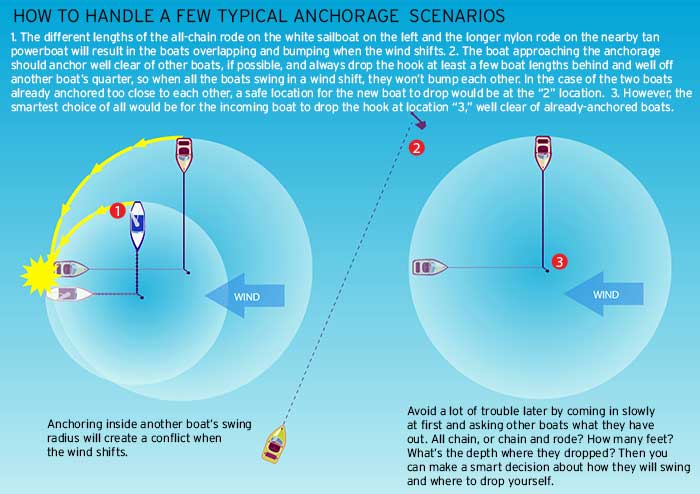 When selecting an anchoring spot, listen to the weather forecast. A dramatic wind shift could make what seems like a quiet cove into an uncomfortable night at best and a potential trap for the boat. Listen to detailed weather forecasts, and ask yourself if you can get out of the anchorage if wind and weather change. Also consider that you and other boats may need to let out more scope if the weather turns bad.

Parts Of An Anchor 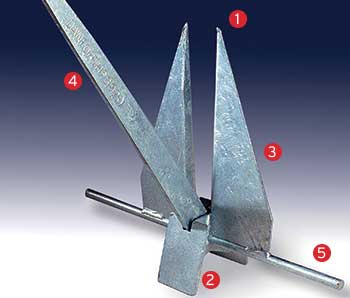 3. FLUKE — The shovel-shaped part of an anchor that digs into the ground.

5. STOCK — Bar situated to force the anchor into position for maximum holding power.

Some anchorages look inviting at high tide, but when the tide recedes, dangerous rocks or the seabed may be exposed, leaving you high and dry. Consult tide tables to figure out if the tide is going in or out and what the range is. Then prepare for the extreme of the range if you plan to be anchored for a few hours or overnight. Otherwise, you may end up aground as the tide goes out.

Read the article "Smarter-Anchoring" for additional information on how to choose an anchorage.

This is one area where electronic charts can be your friend. Navionics charts and others can give the tidal range where you are, whether the tide is rising or falling, and how long it will be to low or high tide. The farther north you go, the greater the tidal range, with places like Maine's Bay of Fundy on the East Coast and many parts of the Pacific Northwest experiencing wide changes — in excess of 14 feet in some places! Other areas, such as the South Carolina, Georgia, and north Florida coastal indentation also experience ranges of from approximately 6 to 8 feet, while other areas experience little range.

Bob Adriance is the former editor of Seaworthy, which is now incorporated into BoatUS Magazine and called BoatUS Reports. The stories and lessons learned are based on real-life BoatUS Marine Insurance claim files.