Improvements in small outboards may pass under the radar. But they also make today's under-100-hp class more reliable and efficient than ever before. 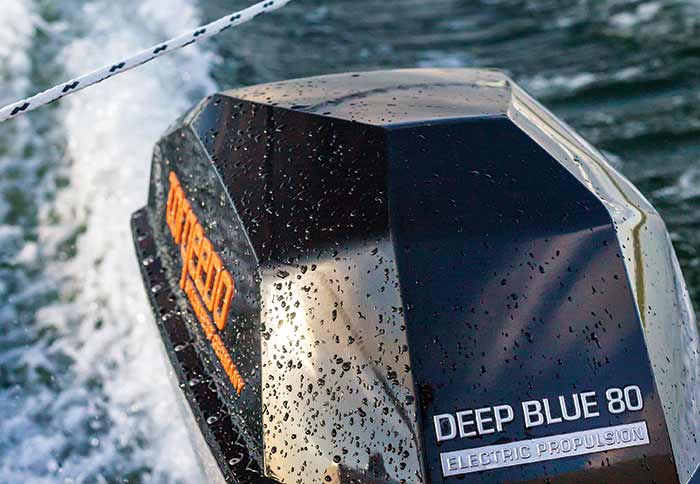 Production-built electric outboards are getting more powerful, like this 80-hp Deep Blue from Torqeedo.

When it comes to outboard engines, the big, powerful models get all the glory. Manufacturers pour research and development efforts into creating blockbusters like the new Mercury 600-hp V12 Verado, the Yamaha F425, and Suzuki's DF350A. And while this over-300-hp class gets the new tech, 100- to 300-hp engines usually benefit as well. Features and advancements commonly trickle down though the range over the following few years, showing up in one model after the next.

But, what about outboards under 100 horses?

These smaller engines generally face a different set of issues and technology that applies. While advancements in these relatively petite powerplants often go unnoticed, they impact a huge range of boaters. In fact, according to National Marine Manufacturers Association statistics, engines under 100-hp account for about 50% of all outboard sales. And some of the strongest pandemic-induced growth associated with the heightened interest in boating and fishing in 2020 came in the form of a 25% jump in the sales of outboards 30-hp and below. So while these little eggbeaters might not make many headlines, they're loved — and counted on — by many of us.

Of all the tech advancements dedicated to small outboards, the most important development in the recent past is very likely batteryless EFI, which is exactly what it sounds like: electronic fuel injection for an engine that doesn't have a battery and/or an electric starter. Mercury introduced the first batteryless EFI in 2009 on 25- and 30-hp models. Suzuki took it to portable outboards in 2012 with the DF20A and DF15A, and Yamaha quickly adopted the tech as well. At this point, it has migrated through most of the major manufacturers' small outboard lineups.

The challenge in developing batteryless EFI lies in providing the ECM and injectors with power, without a power source. Prior to actually starting, the ECM needs to be powered up so it can read the ambient conditions, properly pressurize the system, and figure out how to "tell" the injectors to fire. On early versions of batteryless EFI outboards this was accomplished with two-tug starting: The first pull of the cord energized the injectors and woke up the motor's silicon brain, and the second tug did the actual starting. But manufacturers soon developed systems that accomplished both tasks with a single yank on the cord.

Read this article to learn more about the lineup of ePropulsion outboard and pod drive ­motors.

Many folks reading this probably know that EFI systems are more efficient than mixing fuel and air in a carburetor. But you probably also know that fuel efficiency in outboards this small isn't generally problematic. Considering the amount of fuel they burn and the distances commonly traveled in boats sized for engines this small, shifting to EFI might save the average owner no more than a few gallons of fuel a season. So what's the big deal? Ethanol issues.

Ethanol is the bane of small carbureted four-stroke engines of all types, including outboards. It leads to gummed-up bowls, clogged jets, rough running, and cases of tennis elbow for unlucky boaters who end up yanking on the pull cord dozens of times in frustration. But batteryless EFI systems are closed. The fuel doesn't get exposed to the air, and (unless you allow untreated fuel to sit for weeks on end and phase separation sets in) many ethanol issues become a thing of the past. Reliable one-tug starts become a reality.

Aside from batteryless EFI, there have been a number of additional advancements that make small outboards better than before. As manufacturers shifted from two-stroke to four-stroke tech decades ago, there was significant weight increase across most model lines. A slow but steady diet, however, has more or less erased that bloated waistline. Part of this has come from advancements in composites and plastics, which have allowed for replacing heavier metal and fiberglass parts. Improved engineering has also played a role. Today, many outboards under 100-hp have weights comparable to or only slightly higher than the two-stroke outboards of yesteryear.

Another perk, one that's particularly important to anglers who slow-troll to fool the fish, is the ability to control rpm in tiny increments. While finding the perfect speed was somewhere between difficult and impossible with old-school tiller throttles and cable binnacle controls, many modern small outboards have some form of button-controlled ability to vary rpm down to increments of 50. 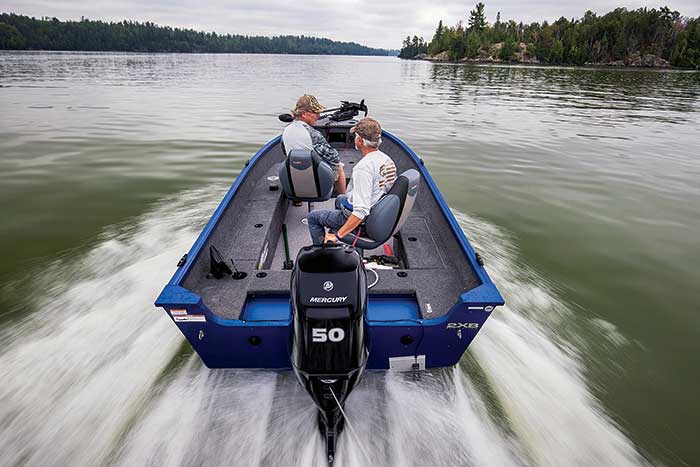 The ­optional Troll Control on the tiller of the Mercury 50 adjusts engine speed as low as 700 rpm in 10 rpm increments.

Meanwhile, some of the improvements developed for those larger siblings have managed to trickle to low-horsepower outboards as well. As one might expect, advancements in areas like corrosion resistance, flushing systems, more powerful alternators, and better vibration-insulating mounting, have all worked their way down the range and can be found in models of virtually all sizes.

As much as small gasoline-powered outboards have improved, there's also a new slew of options for running small outboards that are gasoline-free. Propane-powered outboards enjoyed a burst of popularity but largely faded from the scene as long-term reliability issues became apparent with engines marketed by companies that didn't have a marine background. More recently, industry players Tohatsu and Mercury have begun offering 5-hp propane outboards that are designed for use in the marine environment.

While neither engine has been around long enough to accurately assess over the long-term (Tohatsu introduced its version in 2017 and Mercury in 2019), early results appear to be much better than the previously available propane options. And running on propane is very attractive for many boaters, especially sailors and cruisers who may already have propane aboard for cooking. Additionally, propane burns cleaner, is usually safer to properly stow aboard than gasoline, and doesn't suffer from ethanol problems. Of course, as long as the only offerings are 5-hp, the applications will remain very limited.

A bigger development in alternative power outboards is the advent of electricity as an engine fuel, and thanks to improvements in battery technology, electric outboards are becoming a very real option in the under-100-hp world. Standard-issue lead-acid batteries weigh too much and store too little power to be a viable option beyond their use with small electric trolling motors, and early in the game the volatility of lithium-ion batteries made their use onboard boats problematic, to say the least. But safer, light, reliable lithium iron phosphate (LiFePO4) batteries have opened new horizons for small outboard owners. 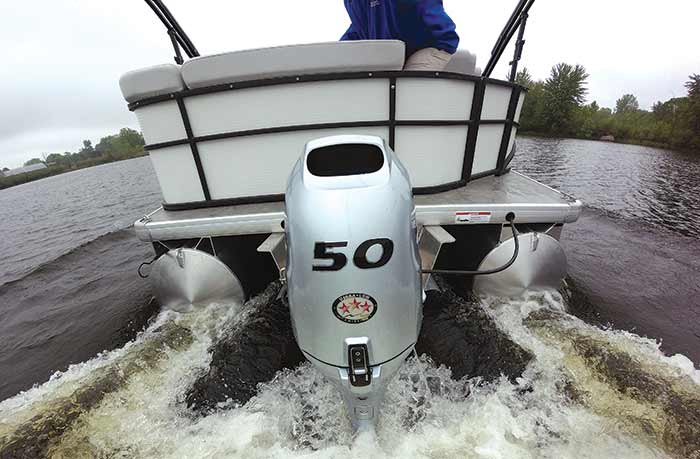 Honda's BF50 is one of the most fuel efficient outboards in its class.

An example: BoatUS Magazine has been testing a 3-hp-equivalent ePropulsion Spirit 1.0 Plus (which retails at $1,999) on a small fishing boat for several months and has found that it doubled speed, quadrupled range, and halved weight as compared to a lead-acid powered rig. With an integrated 48-volt, 1,276 watt-hour Lithium battery that weighs just 19 pounds (it even floats) and clips on top of the outboard's shaft, transporting the motor is easy, and we've found it virtually impossible to run the "tank" dry during a full day of fishing at the lake. (ePropulsion claims a range of around 22 miles). Newer models including pod drives can recharge the battery via feathering the propeller, an attractive ability for cruising sailors. And these outboards are virtually silent and as "green" as an outboard can get.

At least for now, however, the electric advantages shrink as the size of the motor grows. The ePropulsion lineup tops out with 9.9-hp-equivalent models, but more established players in the field do have some significantly larger offerings. Elco produces electric outboards running up to a 50-hp, 96-volt model. Torqeedo offers the most comprehensive model line with numerous offerings ranging from kayak motors to its 80-hp Deep Blue, one of the largest production-built electric outboards on the water. And there are a few smaller players in the field marketing electrics up to and even beyond 100-hp. These bigger motors, however, have a serious hunger for power. That 80-hp Torqeedo is designed for use with BMW i3 (360-volt) batteries, which weigh in at 612-pounds, but full-throttle running time can be less than an hour before the juice is sapped. At moderate speeds, ranges between 33 and 100 miles can be expected, which will meet the needs of many boaters. But another issue to be considered is cost — a complete system runs around $50,000.

While larger electric outboards may still face significant cost and range limitations, just a few short years ago the same could be said for electrics of 9.9-hp and below. LiFePO4 battery tech has evolved rapidly and prices have fallen even as their capabilities have grown. If this trend continues, it will only be a matter of time before more and larger electric outboards appear on our waterways. And considering the advantages they may offer, we wouldn't be a bit surprised if they steal some thunder from those big, gas-hungry beasts and make a few headlines of their own.