Fishing For A Good Cause

A Florida charter captain steps up in trying times to help out his local community and finds generosity has its own rewards. 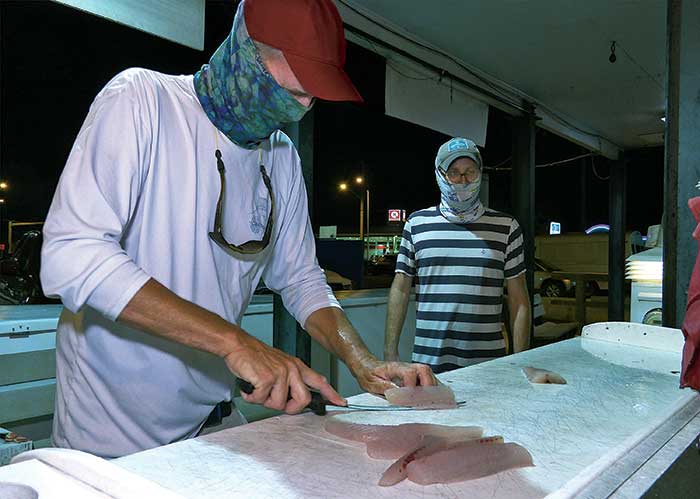 Any charter-boat fisherman who says they have enough business is lying," says Capt. Mike Weinhofer, who's operated Key West Florida Fishing Charters for more than 30 years. By April, COVID-19 put a halt to his business, and to his tourism-based community's economy. So with an established business with five boats and captains, no work to be found, and two teenage daughters, he just kept fishing.

"I started giving away free fish just to help out," says Weinhofer. "A lot of people are having a tough time." After a post on his website and getting the word out through local outlets on the island chain, he directed interested locals who wanted fresh-caught fish to text him and tell him the size of the family. After a day on the water, he fillets the catch and texts the people on his "request list" to pick it up at his slip at Key West's Charter Boat Row.

"The feedback has been awesome," Weinhofer says. "The best part is when people send you pictures of the fish they've cooked, and the smiles and the happy faces. If I can help somebody make dinner for their family, that's a great thing." But boats don't run on smiles, so why else would he burn fuel for no income, other than some regular customers who pitched in after they learned what he was doing?

"My daughters are 14 and 16, and since I normally don't have time, I get to selfishly spend some quality time with them. And they love fishing," Weinhofer says. "What we're doing also shows them what you should do to help people and see how much it's appreciated."

And it is appreciated, he says, estimating about 40 customer requests from Big Pine Key to Key West. "The good thing here is that I only have to go 5 or 6 miles offshore and catch everything I need." Since he started, other local charter captains and guides have also donated fish for distribution.

By mid-May, Weinhofer estimates he'd donated about 650 bags of fish. "Some days I do 40 bags a day; some days I only do five, and on those days, I feel like a failure."

Somewhere along the way in his compassionate mission, Weinhofer had a revelation. "In the fishing industry, we don't realize what fish costs for consumers. I never buy fish. I catch it, and we all eat plenty of it," he says. "But I went to the store and was surprised by the price tag." keywestfloridafishing.com