Some simple tricks to help you evaluate your engine's condition and head off trouble before it gets started. 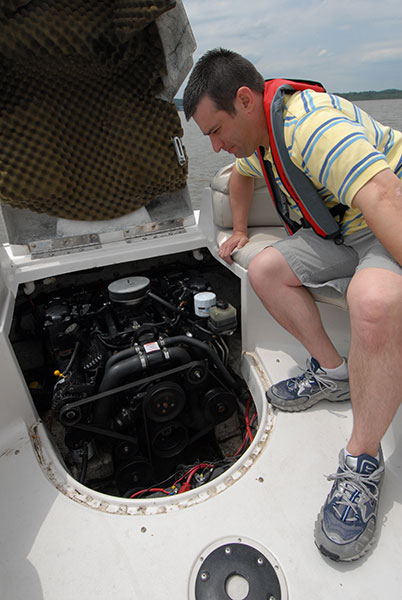 Reading through the claim files, you get the uneasy sense that most skippers didn't have a clue their engines were developing a serious problem until the minute that they sputtered and died. Unlike an automobile's engine, which tends to run and run until the car is traded in, a boat's engine is more likely to develop problems, even when it is relatively new. These problems are considered normal wear and tear, and are not likely to be covered by a boat's insurance policy.

There are three reasons for this disparity between automobile and marine engines. First, a boat's engine works much harder than an automobile engine — up to twice as hard. While an automobile engine "strolls" through most of its life, a boat's engine has to spend many hours swimming upstream. Second, the boat's engine works in a much more hostile environment, water, often saltwater, which can corrode vital parts quickly. And, finally, marine engines develop problems because they are sometimes idle for weeks or even months. If they aren't laid up properly, and many aren't, this idleness encourages rust on internal parts, which is a major source of damage in marine engines (Seaworthy, October 1995).

How healthy is your engine? One obvious clue to an engine's condition is its age. While operating hours are certainly a factor, the number of hours on an engine doesn't bother mechanics as much as the number of years it has been in service. Marine mechanics report that a commercial boat engine that is used every day will often be in better shape mechanically after several thousand hours of use than a recreational boat's engine with only 500 hours.

In this issue of Seaworthy, we'll give you some simple tricks for diagnosing the condition of your boat's engine. These tricks won't tell you everything about your engine, but you'll have a better idea of what's going on internally and when to contact a mechanic to make adjustments that might save on more costly repairs later.

The number one rule of any 4-cycle engine is to change the oil and oil filter routinely, according to manufacturer's recommendations. Oil's role in keeping the engine running is critical — it lubricates all bearing surfaces as well as the crankshaft and camshaft bearings, timing gears, pistons, and valves. Marine engines must work very hard, and an oil cooler must be used in most engines to reduce the high internal temperatures.

Some things to look for in the oil:

According to the claim files, manifold and risers are one of the most likely areas to fail and cause trouble. Water and gases travel through the manifold in separate pipes before combining at the riser and being discharged overboard. Keeping the water and gases separated in the manifold is critical; over time the manifold will corrode, which will allow water to enter the cylinders and wreck the engine.

How long it takes for the manifold and risers to corrode depends on where you do your boating (Seaworthy, April 1996). In saltwater, they may need to be replaced after only three years. In freshwater, mechanics say the manifold and risers could last much longer. As the cast iron parts begin to corrode, rust will often restrict the flow of cooling water, threatening the life of the engine. Any drop in temperature should be taken seriously, but the lack of cooling water isn't always indicated on the engine's temperature gauge. Some clues to the condition of your cooling system:

NOTE: Always check the hoses when you encounter a manifold or riser problem. As water leaves the riser, it cools the hoses. If water flow at the riser has been restricted, the water flow will have been reduced, and the result could be serious damage to the exhaust hoses.

With the Engine Running

If you suspect a problem with one of the cylinders ( a sudden loss of power or excessive black smoke), a mechanic should be summoned to do a compression test, preferably with an Engine Analyzer. This gadget uses a computer to give a more accurate compression readouts than can be had with conventional compression tests, which only indicate gross malfunctions.

Using probes hooked to spark plugs, the machine shorts out one cylinder at a time to measure the drops in RPM. The results are computed on a bar graph so that the mechanic can see exactly which cylinders are weak and which are strong. (A variation of 20% or more, either from the other cylinders or from OEM specifications, is significant.)

If the analyzer (or a conventional compression test) indicates a weak cylinder, a simple follow-up test by the mechanic will indicate whether rings are the problem or whether the engine has a less serious valve problem: Pour one tablespoon of oil (any more will hydraulic the cylinder and give a false reading ) in the cylinder and repeat the test. If the reading on the weak cylinder is equal to the reading on the strong cylinders, the problem is rings (ouch!). If the numbers continue to indicate a weak cylinder, valves are the problem.

Engine hoses should be checked to see that all are healthy. A Napa publication on belts and hoses reports that most engine hoses fail from the inside out as the result of an electrochemical reaction (called "electrochemical degradation" or ECD) that occurs as the hose ages and tiny cracks form in the rubber. These cracks then absorb coolant in the freshwater cooling system, which attacks and weakens the hose's reinforcement. (Mechanics report seeing the same condition on hoses in the raw-water portion of the cooling system, especially when the boat is used in saltwater.)

ECD can be detected by squeezing the thumb and a finger on the hose about 2" from the clamp. If the ends of the hose feel soft and mushy, the chances are good that it is breaking down internally and it should be replaced. The article recommends checking the middle of the hose, as well as the ends, to discover differences in softness. Gaps or channels that can be felt along the length of the hose also indicate impending failure.

If you have doubts, confirm the motor's serial and model numbers (and outdrive number, if applicable) and contact the manufacturer. This can usually be done with one or two phone calls. Manufacturers have motor, outdrive, and transmission information, including major repairs and recalls. Their records can often be used to ascertain the date of manufacture, shipping location, and original owner.

how to diy maintenance systems