Some LED lights have been shown to degrade VHF performance. Here's how to check the lights on your boat. 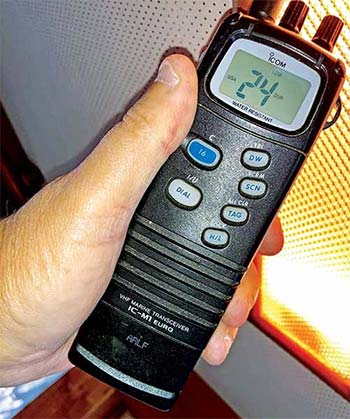 The U.S. Coast Guard recently sent out a safety alert
regarding radio interference from some LED lights.
(Photo: Mark Corke)

When LED lights went mainstream in the 1990s, it was something of a miracle — consuming 70 percent less energy, lasting up to five times longer than incandescent bulbs, and never getting hot. Sure, they cost more, but the savings made them well worth it, so these "light-emitting diode" lights have proliferated ever since. More recently, a glitch in the use of LEDs on boats has emerged, starting with a safety alert from the U.S. Coast Guard, based on reports from commercial vessels regarding poor reception on VHF frequencies used for radiotelephone, digital selective calling (DSC), and automatic identification systems (AIS) when in the vicinity of some LEDs.

If you suspect your LEDs are impacting your onboard electronic communications, the following method, using a handheld VHF radio, will allow an operator to individually check each light fixture for radio-frequency interference (RFI) emissions and provide a relative indication of the strength of the RFI being produced, one fixture at a time.

All LEDs use a circuit that limits the amount of current that flows through the lamp. Some circuit designs generate significant RFI, while other (usually higher quality) LED lamp control circuits don't generate these potentially harmful RFI emissions.

How To Test Your LEDs

You'll need a handheld VHF radio with an incoming signal strength level indicator on the screen. Typically this is provided through the appearance of a range of zero to four or five "bars" illuminated on the screen. Higher strength signals are indicated by an increase in the number of illuminated bars. This functionality allows you to use the handheld radio as a relative signal strength meter while the speaker provides an auditory indication of RFI presence.

2. Tune to a channel that does not have active transmissions. My handheld picked up the strongest RFI noise from my boat's LED lights on channel 20 or 21. Yours may be most affected on a different channel, depending on the frequency of the interference your particular LED circuits are broadcasting. Try measuring the RFI from your lights on every channel. 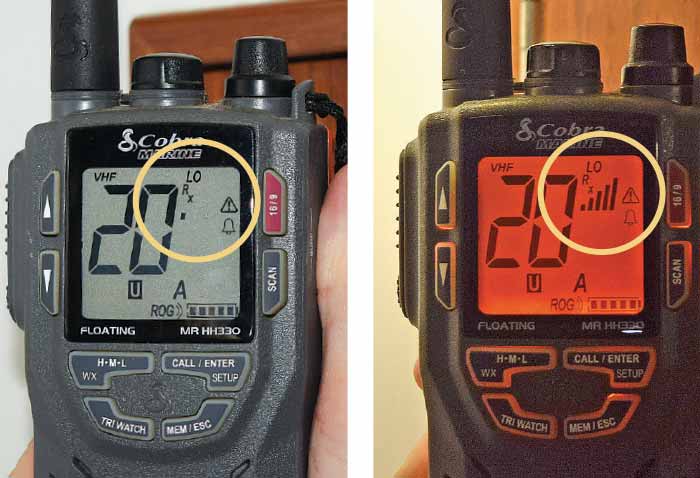 4. If the signal strength bars show an increase in signal, you will likely also hear an increase in the volume of static noise on that frequency. If this noise is being generated by the LED light, it will increase when the light is turned on and decrease when the LED light is turned off. It may be useful to have a helper turn lights on and off while you monitor the display on the VHF. The signal strength bars should mirror the increase and decrease in sound volume or pitch.

You should consider replacing any LED bulb or fixture that produces a strong RF signal level increase when the lamp is illuminated. Because it is difficult to determine the exact level of RFI noise that would cause VHF reception issues for every boat and installation, all RFI "noisy" lamps should be replaced with a lamp that is either RFI silent or certified by the manufacturer to have been designed for acceptably low levels of RFI emissions in marine use. If you have questions about this certification, contact the manufacturer of the light or fixture for further information.

Finally, if you need further assistance in assessing the suitability of the LED lighting on board your vessel, contact an American Boat & Yacht Council (ABYC)-certified marine technician.

David Turley is a commercial jet captain, a certified Airframe and Powerplant aviation mechanic, and a lifelong sailor. He is currently checking the AC wiring on his 44-foot Bruce Roberts ketch and sails on Delaware and Chesapeake bays.