They may occupy a small niche among runabouts, but jet-propulsion boats have distinct advantages over prop boats. 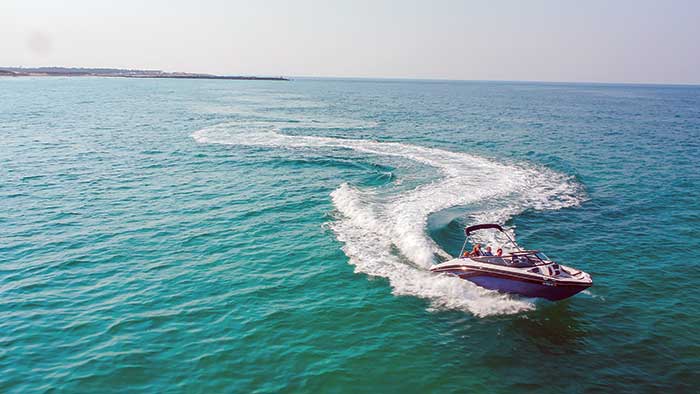 A sweet spot in any design comes when a utilitarian solution results in something new that's just a heckuva lot of fun. William Hamilton developed jet boats in New Zealand in the 1950s in response to the shallow, rocky rivers of his homeland laying waste to propellers.

It took awhile for the technology to seep into American recreational boating, but jet power made a splash with the early personal watercraft (or "water scooters") in the 1970s. Yamaha eventually developed and introduced the recreational jet boat in 1991, creating a unique new niche to life on the water.

Read this article to learn more about the range of boat propulsion systems ­available.

Jet boats have their advocates and detractors, but they are what they are, with distinct advantages and disadvantages to propeller-driven boats. On the plus side, you have a significantly lower price tag per size and horsepower; simple operation; less maintenance, especially when winterizing; a more open deck layout; and without an outdrive or prop, trailer launching is easier. Plus they can run in shallow water and have zero chance of a prop injury (see "Jet Power Dangers" below).

Much is made of jet boats being safer because there's no danger of a prop injury, which is true. But you don't want to be anywhere near a jet drive. The large volume of water used in the jet stream comes from the craft's impeller drawing in the body of water the craft is floating in and force pumping it through a steering nozzle located at the end of the craft. On average, 50 gallons of water a second can be traveling through the exit nozzle with 800 pounds of force to create the jet thrust used for forward movement. Imagine what damage that can do to your body.

As for drawbacks to jet propulsion, with no outdrives they're harder to steer at slow speeds; they can't be trimmed (except for some high-end models such as from Hinckley Yachts), so lumpy water is a problem; they're typically less fuel-efficient than sterndrives and not as fast for a given horsepower; and high-pressure jet streams don’t produce the same crisp-edged surfable wakes of sterndrive props.

But anyone who's driven one knows they're fast to plane, nimble, zippy, and fun to drive. Only a few manufacturers focus on recreational jet boats, but recent years have produced a spike in new technology and systems to reduce the performance gap with sterndrive- and outboard-powered runabouts.

Anatomy Of A Water Jet

Compared to outboards, inboards, and sterndrives, a direct drive jet-propulsion system is remarkably simple. The shaft from the engine connects, not to a propeller, as it would on a conventionally powered boat, but to an impeller housed within the jet-drive unit. The impeller sucks up water through a large intake protected by a screen in the bottom of the boat. The impeller and pump then force the water out through a nozzle below the waterline mounted on the transom at very high speed, providing significant amounts of thrust.

Compared to outboards, inboards, and sterndrives, jet propulsion systems are remarkably simple, with an impeller integrated in the compact driveline – and no outdrive or propeller. (Photo: Yamaha)

When the engines are on, minimal jet thrust is outputted through directional nozzles at the stern. When the throttle levers are pushed forward, jet thrust is outputted unimpeded and the boat quickly jumps up on plane. When the levers are in neutral or reverse, a V-shaped "bucket" control drops down across the jet nozzles, redirecting the water flow under the boat toward the bow to either hold the boat's position or back up.

The nozzle also provides the steering, and response from port to starboard is instantaneous, giving jet boats superior agility. Think about your own boat for a moment. For low-speed maneuvering, to turn from hard port to hard starboard on a sterndrive boat typically requires rotating the steering wheel at least 21/2 revolutions — and about six revolutions for an outboard. With a jet boat, a hard turn is less than one revolution — about 270 degrees. So, propeller boaters typically have to learn to not oversteer a jet boat. 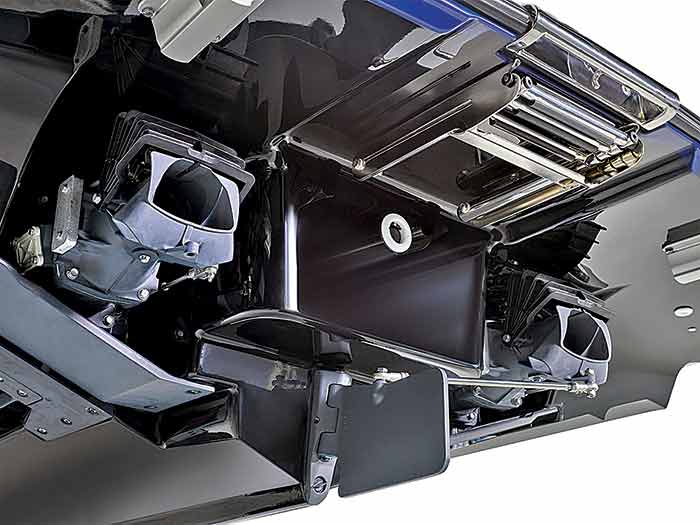 Yamaha jet boats feature an articulating keel for improved maneuverability at all speeds.

"There is a bit of a myth related to earlier generations of jet boats," says Bryan Seti, general manager, Yamaha WaterCraft, which claims more than 80% of new jet boat sales. "We've developed innovations to address that perception, known as Yamaha's Advanced Responsive Handling suite of technologies." Their system consists of four components:

"Recently, we introduced a handling technology called DRiVE, which is a patented, dual paddle control system for low-speed handling and docking," Seti says of the paddles behind the steering wheel the skipper flicks with his or her fingers. "The operator can fully control forward, reverse, and throttle without ever removing his or her hands from the steering wheel."

Another manufacturer focused exclusively on jet boats is Scarab, which was previously known for go-fast performance powerboats (remember Sonny Crockett's boat on "Miami Vice"?). Scarab reinvented itself in 2013 with a line of sporty jet boats ranging from 16 to 25 feet.

While Yamaha builds all its own components, including the engines (most jet boats have twin inboards), Scarab incorporates Rotax engines from BRP. That propulsion system features iNR (intelligent neutral in reverse). While typical jet-propulsion systems use levers and cables to engage the reverse gate, iNR is a completely electronic system. It better delivers stationary neutral positioning, electronic shifting, and BRP's patented lateral thrust control for low-speed handling.

The third major player in the jet boat market, Chaparral Boats, better known for its sterndrive and outboard powered dayboats, launched its Vortex line of jet boats in 2014. Like Scarab, Vortex powers its 20-, 22-, and 24-foot boats with Rotax engines and the iNR system. For low-speed maneuvering, Vortex incorporates an oversized aluminum gate that helps direct the jet thrust to either side of the transom to increase maneuverability, especially in reverse. 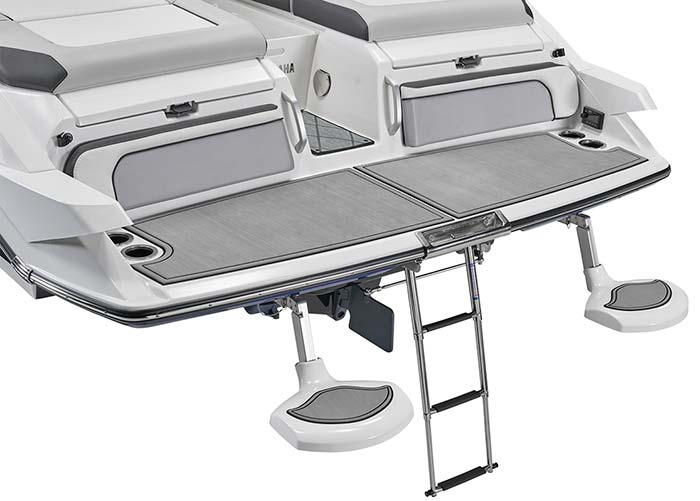 To please the wakesurf crowd, Vortex recently introduced its exclusive Aerial Surf Platform that is fully integrated into the swim platform. The engineering team sculpted an Aerial Platform to optimize the shape of the wake generated by the twin jet nozzles for a smooth and tall riding surface — ­without the use of any power actuators, trim tabs, or wedges.

A jet propulsion system creates an additional advantage that translates to the boat's deck design. Because the driveline sits inside the hull, the entire deck is opened up for more usable space. This "engineless" design is a clear difference between jets and any other boats. Manufacturers say the most common question they field at boat shows is "Where are the engines?"

Doyle Vanderpol, marketing coordinator at Rec Boat Holdings Group, which owns Scarab, is quick to rattle off the advantages of jet boats.

"Jet engines are less expensive than sterndrive or outboards because there are fewer moving parts. They are also lighter, which makes trailering easier," he says. "But what stops people in their tracks is the price tag. You can spend comparatively less money for a 20-foot boat."

Rather than obscure price on their websites, jet boat manufacturers proudly use it as a marketing tool. Scarab's 195 G sport boat with trailer starts at $32,000. Scarab also builds a zippy four-seat 16-footer that sells for just under $21,000.

"Jet boat customers are dayboaters or people who want to get into boating," says Vanderpol, noting that jet boaters are surprisingly not typically personal watercraft enthusiasts moving up.

"You can fish from them, tube from them, hang out at party spots, run out for dinner. It's a water vehicle that can take 8 to 10 people out for fun," he says.

"Jet boats are a very versatile product, which lends itself to a very versatile customer base," says Chaparral's marketing director Ryan Swaims. "You can use these boats for cruising, towing, or even surfing. Some people are looking for something different, while others have been lovers of jets for a long time. They are drawn to jet boats because of the quality, design, and ability to do whatever they want on the water."