Rules For Entering The Bahamas By Boat

Recent boardings in the Bahamas, one of the most popular destinations for East Coast boaters, has cruisers wondering what to expect. 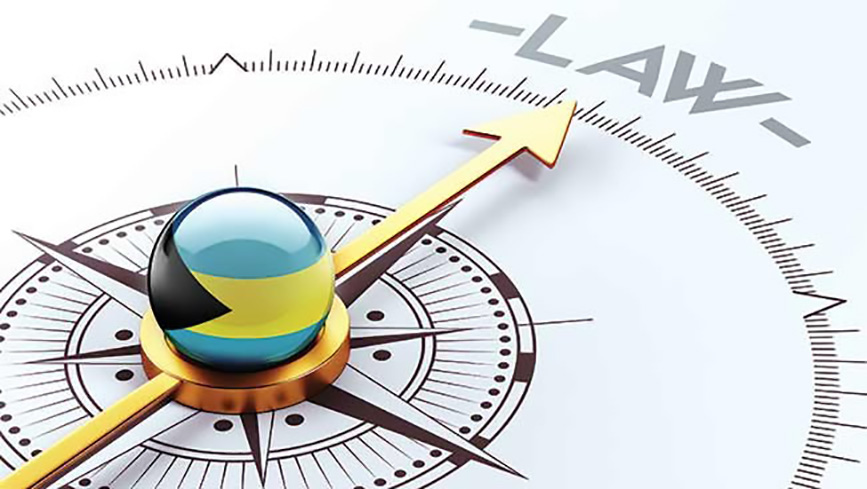 Angela O'Connell and John Hallbauer, a Florida couple who has cruised the Bahamas for years, were boarded by the Bahamas Customs and Border Patrol in April while anchored at the remote island of Great Sale Cay in the Abacos. O'Connell recounted that seven agents boarded their boat, inspected their paperwork, and began to, as the couple put it, "aggressively go through" their lockers and drawers.

The agents found a discrepancy in the number of declared shotgun shells (for a gun kept on board for security) reported to Bahamian officials on entry. At that point, she told us, things got even more aggressive. Hallbauer and O'Connell, one of whom is a retired attorney for the U.S. Department of Justice, said the agents told them they would have to go back and appear before a magistrate in Freeport, Bahamas, and possibly spend six months in jail if they did not pay a $300 cash fine on the spot.

O'Connell said they were told that this type of inspection was "a new policy" started in early 2018 and that border agents were now going out to remote islands. She also said the agents could not cite any guidelines to show that the fine was legitimate. O'Connell said she and Hallbauer, both in their 70s, were terrified and had to scramble to find the cash before they were given a receipt and allowed to go. They noted that several other boats in the anchorage were also boarded by the same agents.

While this was an unfortunate — and intimidating — event for the couple, their experience is a good reminder for foreigners who cruise the Bahamas or other ports outside of the U.S. The couple's bullet miscount was likely an innocent mistake, but firearms laws are very strict in the Bahamas, as they are in many parts of the world. It could have meant the missing ammunition had been fired during the couple's visit or that it was sold to, given to, or stolen by someone local — all serious infractions. In this case, the fine may have been legitimate and allowed them to continue their trip without having to return to a magistrate's office on another island. 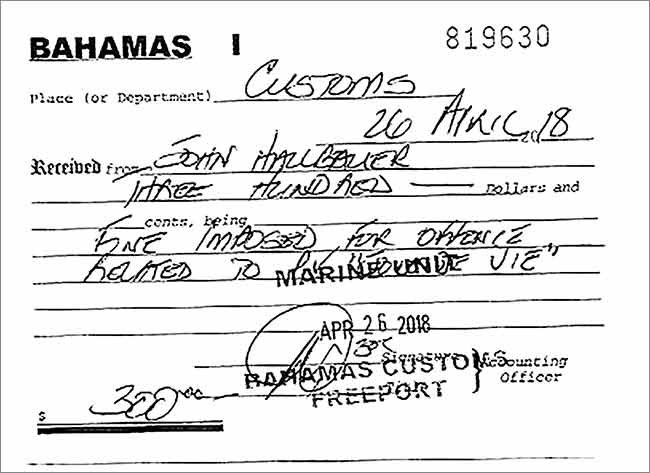 A copy of the receipt Angela O'Connell and John Hallbauer received from the Bahamas Customs and Border Patrol officers for the $300 fine they paid after having their vessel boarded and searched in April.

While boardings in the Bahamas may seem unusual to visiting boaters, it's likely because of the vast area officials have to cover, and stretched boarder-agent staffing, that recreational vessels are not frequently boarded. But it does happen, and visiting boaters need to be prepared for it.

Even though the agents may have been aggressive and were not able to cite an established fine structure in this case, it's important to note that the officials did give the couple a receipt for the $300 cash fine they paid. Boardings may be becoming more frequent as officials try to make sure foreign visitors are following Bahamian rules to the letter.

So, What Are The Rules?

Part of the problem may stem from the lack of easily accessible information about regulations in the Bahamas. While the official Bahamian website has information about how visiting cruising boats must declare all guns and ammo on board, there is nothing about fines, especially on-the-spot fines that may be levied by agents in remote islands. The website for the U.S. Embassy in the Bahamas, however, points out that the Bahamas has recently increased both the penalties and sentencing for violators of local firearm laws. It is unclear if any of these changes apply to other violations. As of press time, numerous emails and phone calls from BoatUS to various customs officials and other Bahamas government offices inquiring about new policies and fines have gone unanswered.

We spoke to Sarah Lewis, co-author with her husband, Monty, of Explorer Chartbooks, the most comprehensive set of guides and charts of the Bahamas. She had not heard of increased boardings but isn't surprised about any ramping up as officials check for firearms and drugs. "The Bahamas Defense Force is their first line of enforcement," she said. Lewis could not speak for the validity of the $300 amount paid by the couple but did say that, over the past two years, customs has become a bit more uniform in the fees it imposes.

"For instance," she said, "check-in fees used to depend on when and where you checked into the country, PLUS overtime and transportation costs of the agents if the check-in was after hours or in a remote location. An official once told me that these fees were 'at the whim of the officer,' and I used that quote in our guidebook so boaters would be prepared."

Lewis also said, "The greatest abuse was the 'flexibility' of the cruising permit fees. Monty and I always give boaters the same advice, that in the Bahamas you need to abide by the rules to the letter, make sure your paperwork is completely accurate, and be as polite as you can to the officials."

In today's world, it's doubly important to painstakingly obey all laws of foreign countries that you might visit. Make sure your documents and manifests are 100 percent accurate. Keep in mind that in other countries you may not have the same rights, such as due process, as we have in the United States. If you break the law, the results may not be what you expect at home, nor will you be given any "passes" for not knowing the rules.

If you're faced with an instant fine in the Bahamas, your choice is to pay it on the spot or appear before a magistrate. If you don't think the fine is legitimate, after you pay it, contact the Bahamian Ministry of Tourism, and let us know, too, at ConsumerProtection@BoatUS.com.