Hydrofoils make everything from water skis to sailboats to giant ferries faster (much faster). But how the heck do they work? 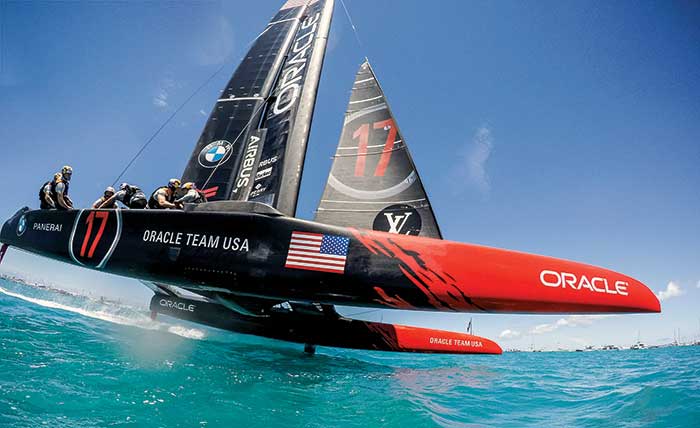 Ever wonder why a sleek, powerful recreational boat is not even as fast as a typical economy car? It has to do with friction. An economy car needs a little over 100 horsepower to speed by at 100 mph, but pushing a boat through the water that fast takes several hundred horsepower. The reason is that water is almost 800 times denser than air.

Imagine standing on your dock in a 10-knot wind — it's not hard to do. Now imagine being in a river trying to stand up to a 10-knot current. The water is so much denser that no matter how strong you are, you'd be swept away. A boat hull has to push through all that dense water while a car can slip through the air much easier.

Planing boats are able to go faster than displacement boats because they lift part of their hull out of the water as they race over their bow wave, but there's still a lot of friction from the water on the rest of the hull. If you could get the hull all the way out of the water, you'd eliminate that friction, and the boat could go faster with the same amount of power.

Most of us have a pretty good understanding of how an airplane flies. As air flows over and under the wings (also called airfoils), it creates lift. Once an airplane is going fast enough, the lift that the wings create allow it to rise above the earth.

If you were to mount a wing or two (called hydrofoils) under a boat, all that dense water can be put to good use by pushing the boat's hull out of the water. Then friction only acts on the small foils, not on the whole hull, which is why a 130-foot hydrofoiling sailboat can "fly" at over 50 knots. Powerboats have added friction from the propulsion system that has to remain in the water, but even then, large hydrofoiling ferries can exceed 45 knots.

Speed is not the only advantage that hydrofoils give boats. Because the hull is out of the water, all the energy from waves that would normally pound against the boat pass harmlessly underneath it, creating an eerily smooth ride. Even so, hydrofoiling is typically best in somewhat protected waters.

Don't look for hydrofoils on your next runabout anytime soon because they're much more difficult to engineer and typically triple the cost of a boat. The good news is that there are other ways to 'foil that are affordable — see "Experience Hydrofoiling For Yourself" at below.

Experience Hydrofoiling For Yourself

If you've even seen a kiteboard zooming in a strong breeze, you know they're plenty fast. Add a hydrofoil, and suddenly you add a new dimension. These boards take lots of skill and practice to master, but the ride is said to be much smoother and even faster than a conventional kiteboard. Cost starts at around $1,000.

These single-ski hydrofoils are really a sit-on-ski, and once you've mastered the technique, the foils will lift you up and you'll be "flying." Unlike conventional skis, these aren't designed for speed, and 18 mph is where they typically "liftoff' and suggested top speed is about 25 mph. It's also important not to ski in shallow water due to the depth of the foils. Cost is typically $1,500 and up.

Not content to take a surfboard and add a sail, windsurfers developed foils that allow the board to "levitate." The biggest advantage is the smoothness of the ride — a real benefit because these rigs usually sail in very strong winds with plenty of chop. Cost is about $2,500 to get started.

You don't have to spend millions on a boat like the America's Cup racers if you want to hydrofoil. The Waszp costs about $10,000, though even for dinghy racers, there's a learning curve to get these boats on their foils, with speeds up to 27 mph.

Note that most companies suggest wearing a helmet when using foiling products because of the speeds achievable and the hard, sharp foils these devices have.

America's Cup boats are often what people think of when they hear the word "hydrofoil." Hal Youngren, an aeronautical engineer and one of the designers for the 2013 and 2017 America's Cup racers, says the difference in speed that foils make is impressive. The fastest nonfoiling catamarans in previous races could barely reach 35 knots, while the 2017 foiling cats hit 50 knots. Youngren says that these 50-foot cats are able to lift their hulls completely out of the water using only about three-quarters of a square meter of foil area (about the size of a medium-sized TV). Below about 15 knots, he says, the boats sail much like a nonfoiling boat with hulls in the water, but once over that speed, the boats start to "fly" and their speed dramatically increases.

An exciting new era in America's Cup racing was unveiled in November 2017 as the concept for the AC75, the class of boat to be sailed in the 36th America's Cup is released illustrating a bold and modern vision for high performance fully foiling monohull racing yachts.

The Emirates Team New Zealand and Luna Rossa design teams spent the previous four months evaluating a wide range of monohull concepts. Their goals have been to design a class that will be challenging and demanding to sail, rewarding the top level of skill for the crews; this concept could become the future of racing and even cruising monohulls beyond the America's Cup.

The AC75 combines extremely high-performance sailing and great match racing with the safety of a boat that can right itself in the event of a capsize. The groundbreaking concept is achieved through the use of twin canting T-foils, ballasted to provide righting-moment when sailing, and roll stability at low speed.

An underlying principle has been to provide affordable and sustainable technology "trickle down" to other sailing classes and yachts. While recent America's Cup multihulls have benefitted from the power and control of rigid wing sails, there has been no transfer of this technology to the rigs of other sailing classes. In tandem with the innovations of the foiling system, Emirates Team New Zealand and Luna Rossa are investigating a number of possible innovations for the AC75's rig, with the requirement that the rig need not be craned in and out each day. This research work is ongoing as different concepts are evaluated, and details will be released with the AC75 Class Rule before March 31, 2018.

The America's Cup is a match race and creating a class that will provide challenging match racing has been the goal from the start. The AC75 will foil-tack and foil-gybe with only small maneuvering losses, and given the speed and the ease at which the boats can turn the classic pre-starts of the America's Cup are set to make an exciting comeback. Sail handling will also become important, with cross-overs to code zero sails in light wind conditions.

A huge number of ideas have been considered in the quest to define a class that will be extremely exciting to sail and provide great match racing, but the final decision was an easy one: the concept being announced was a clear winner, and both teams are eager to be introducing the AC75 for the 36th America's Cup in 2021. — americascup.com