What Happens When You Run Aground And How To Avoid It

A longtime marine accident investigator shares tales of damage from his casebook — and tips on how to avoid being that guy stuck on the sandbar. 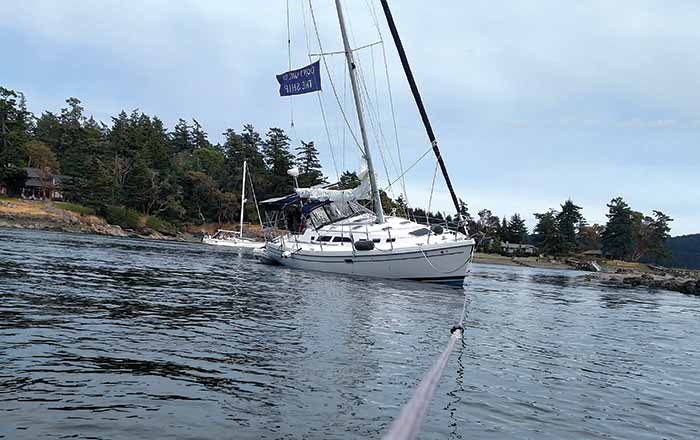 So there I was, a young man sailing a demo keelboat from our sales inventory at the Rhode Island dealership where I worked. My boss had arranged for me to take five tellers from our bank out for a sail. They were attractive young women, and I may have been a bit distracted when I hit a granite ledge just outside the mark at the mouth of Bristol Harbor. We were all jostled on deck, but no one was injured. I hauled in, heeled over, and sailed right off that ledge like nothing happened ... that is until I noticed a solid stream of water coming from the bilge pump outlet. By then we were close to home and nearing the end of the sail, so I headed back to the marina, dropped off my guests, and started up the Travelift for a haulout.

Decades later I still reflect fondly on that moment because it steered me toward a 35-plus-year career in surveying damage to vessels after unfortunate casualty events.

So what can you expect when you run aground? It's quite likely that eventually you will. Boat design and build have everything to do with damage when it comes to groundings. Let's start with sailboats. As new sailboat designs evolve, they are made from lighter materials, which results in a higher proportion of damage. Simply stated, the more we're making keels thinner to go faster, the higher the rate for damage there is. It's a matter of the geometry involved. Thinner, deeper keels that strike objects tend to have the aft end of the keel pushed up into the hull, while the leading edge is pulled down in somewhat of an equal but opposite reaction. Both actions can and often do result in hull damage.

When it comes to what lies beneath the water's surface, there are regional differences, of course. In New England, the Great Lakes, and on the West Coast, there are granite ledges and rocks — completely unforgiving of a skipper who neglects to pay attention to his or her depth sounder. New Jersey's waterways, along with most of the southeastern states, ICW, and Florida (some Gulf Coast, too) have more of a sandy, silty bottom. This is much more forgiving when it comes to running aground. But hit a coral reef, for example, and not only will your pride and your boat be hurt, your wallet may be hurt as well from fines associated with the reef damage.

From my experiences as a surveyor, let me break down some typical grounding scenarios, starting with a hard grounding on a solid reef or ledge. With the rugged bottom of a full keel with heavy laminate, you may get lucky and bounce off. In many cases like that, a haulout and external repair of the damaged area is all that is needed. On occasion, there may be damage to ballast or laminate, but rarely does the damage become a structural game-ender.

This is not the case for the lighter, faster, and deeper keelboats discussed earlier. For boats with deep-fin keels, spades, or skeg-hung rudders, with a keel step mast, the keel (typically a nice big piece of shaped lead) is attached to your hull with a series of keel bolts. Usually there is one bolt in the front, a series of pairs following that, and then one in the aft end above the trailing edge (back) of the keel. 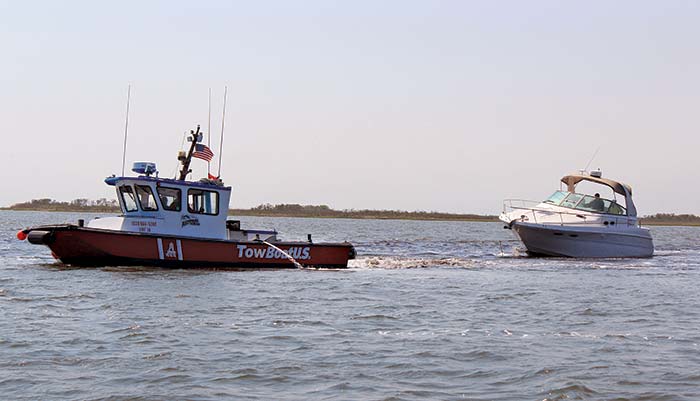 Paying attention to your charts and depth sounder will help prevent you from being on the end of a tow.

How the keel is supported by the hull often dictates the damage from a hard grounding. If the bilge has a stringer grid and the keel is attached and glassed in with FRP tabbing, damage could include what's called "compression" damage to the hull at the trailing edge of the keel and "tension" damage to the forefoot, the leading edge of the hull forward of the keel. In that case, I look for tearing and cracking of the keel joint and keel sump and possible delamination of the tabbing at the grid. A word of caution, though: After a collision, the damage may not be obvious from looking at the hull exterior, but catastrophic damage could be done in the bilge, which can be difficult to assess due to the tight access on some boats.

If the impact is significant enough, your mast and rigging may be damaged from movement of the mast step and possible compression and tension damage to the rigging. For this reason, a sailboat that's taken anything more than a bump needs to be inspected by a professional.

The more we're making keels thinner to go faster, the higher the rate of damage there is. It’s a matter of the geometry involved.

One question I often get: Do you need to drop the keel to inspect its mounting? That depends. If the hull and keel sump area around the keel joint are heavily damaged and delaminated, then yes, the keel will need to come off for repairs. If not, and there is no evidence of damage to the keel bolt areas, then from my experience, removing the keel is likely not necessary.

For our powerboat brethren, grounding damage is typically simpler to inspect, diagnose, and repair than on sailboats. Let's take a look at a few issues facing powerboat owners and repairers with today's powerboat offerings.

As with full-keel sailboats, the powerboats out there with a full keel (displacement trawlers, single, or double screw) usually avoid too much trouble at 8 knots since they're protected by a massive chunk of fiberglass (although old fashioned, heavy solid-laminate construction has pretty much gone the way of the landline telephone). Aside from hull gouges, straightforward damage includes shaft, strut, propeller, and cutless bearing damage. There is the potential for transmission damage from a hard hit. I've inspected many boats that hit so hard that the engine-transmission case or bell housing broke, and a few that even pulled the engine right off its mounts. 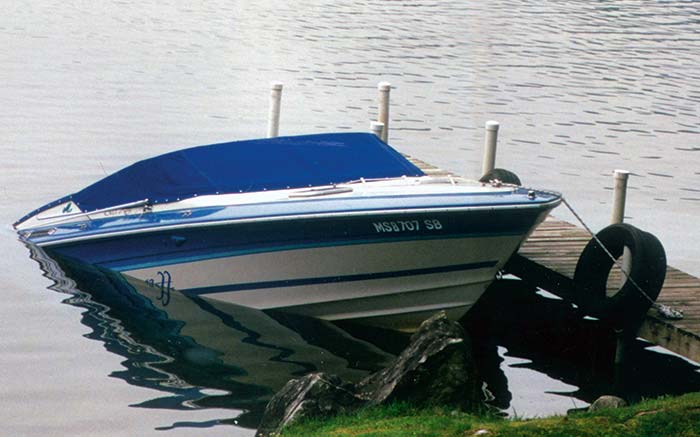 Even if your boat seems fine after a grounding, there could be damage you can't see. I've seen boats sink at their slip hours following what seemed to be a "bump." After a grounding, monitor the bilge and if something doesn't seem right, have the boat hauled and inspected. Many insurance policies, like those provided by BoatUS, cover this preventive inspection.

With newer boat designs, the focus is on lighter, faster, more fuel-efficient hulls. Lightweight is great if you are cycling in your Tour de France gear, but I think that super lightweight construction has no place for boats that head several miles or more offshore. Impact damage to these lighter designs varies depending on construction. If the hull is cored, there could be massive core delamination. The struts could punch right through the hull, rudder and rudder ports may be ripped out, and the internal grids may suffer serious structural damage. Carbon fiber, Kevlar, and other exotic materials are cool, but damage levels and costs to repair are much higher.

About 10 years ago, boaters were introduced to a revolutionary propulsion system: pod drives. They are designed to maximize boating pleasure, reduce weight, and increase performance and fuel economy. Unfortunately, they are also designed to break away during impact to reduce damage and the possibility of injury. Impact damage includes the loss of the drive, potential damage to the FRP grid to which the structure is attached, and transmission damage. Rarely have I found that the pods are repaired, even when found and returned.

Being an attentive skipper is paramount, as I learned as a young man sailing aground in a harbor that I spent almost every day working in, knew well, and still ran aground. Yes, I was distracted with my passengers aboard, but I took my eye off the ball. Any boat operator needs to be hypervigilant and know where he or she is at all times. Understanding charts and electronic navigation aids is one thing, but knowing how to read the water (waves and white caps in relatively calm water, for instance, spells danger) is essential.

Aids to navigation (buoys, day markers, floats, balls, etc.) are there for a reason. Their colors and shapes have meaning, and there are lots of variations. Suffice to say, that there are ICW markers, lake and reservoir markers, river markers, and then privately maintained markers. My point is that you need to know what is in the area you will be navigating. One set of markers that are used in almost all areas are danger/information markers. If you see a white-and-orange buoy with a diamond, danger lies ahead. A square with a cross in it is an area of exclusion, and squares are used for information. Observe and obey those markers.

Above all else, the best advice I could possibly give is to remember the five P's: Proper Planning Prevents Poor Performance. Use charts for heaven's sake. Plan your trip. Know what lies ahead. Understand what markers you need to know and what you will be seeing along the way. The last thing you want is to be surprised.