Boats don't have cable, and onboard satellite TV is incredibly expensive, but any savvy DIY boater can add a TV and an antenna for free terrestrial channels. 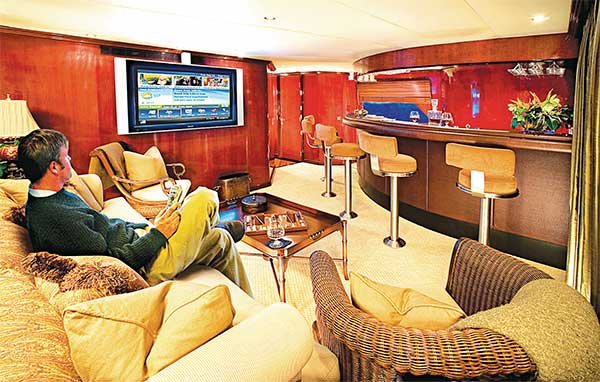 It seems almost archaic to even talk about getting television transmissions over the airwaves. But for many boaters, this is going to be the only economically feasible option. In some areas you can get cable at the dock, and fixed-dish satellite TV is a reasonable option when you're moored up. But once you cast off the lines, neither of those options will work.

Unless you're tied to the dock, a TV that operates on 12 volts may be a good idea.

You'll be counting on using that antenna for a long time to come, so make sure you choose the right one in the first place. There are several key considerations, including size, whether it's directional or multidirectional (also called omnidirectional), and whether it's amplified or non-amplified.

Amplified vs. non-amplified. Many TV antennas have built-in amplifiers or preamplifiers, and amplifiers can be added to those that don't. But, truth be told, in marine applications they don't usually do much good and may even degrade your reception. Antenna amps don't improve "bad" signals, and they can increase signal distortion. Their real purpose is to help get the signals through long stretches of cabling and/or splitters, and any system with less than 20 feet of coax probably doesn't need an amp. Many boaters will have a relatively short stretch from the antenna to the TV, and splitters usually won't be involved, so an amp often isn't necessary.

The good news: Although the old-fashioned airwaves don't carry nearly the same selection of programming, they're still free, and mounting a TV antenna on your boat is a DIY piece of cake. Plus, HDTV is far superior to the old analog broadcasts, on the water as well as on land. As is often the case when mounting an antenna, one of the most important decisions you make is where to locate it. According to John Barry, a training instructor for the National Marine Electronics Association and Synergist at Technical Marine Support Inc., a clear view of the horizon is even more important than a clear view of the sky. "These are line-of-sight transmissions," Barry said, "so horizontal orientation is what really counts. As a rule of thumb, you want to stay at least 4 feet away from VHF antennas and, of course, stay out of the path of your radar and any satellite-communications gear."

Once you've found the best location for your TV antenna, it's time to get to work.

1. Choose your television and where you'd like to locate it. The key here is to make sure you have access to the back of the bulkhead (or to the inside of the cabinetry, if you choose a flip-down under-counter model) at the spot where you want the television located. This way, you can mount it with rugged thru-bolts with Nyloc locking nuts rather than with screws, which will back out one day due to boat vibration.

2. If you won't be putting the TV on a fixed stand, choose a universal TV wall-mount. There are many to choose from on the market. Be sure to get one rugged enough to withstand the boat's motionsand made of components that won't corrode quickly in the marine environment.

3. Thru-bolt the mount to the bulkhead or cabinetry, then mount the television.

4. Choose your antenna, and get a mount. (The mount is usually sold separately; most TV antennas have standard 1-inch/14 threads and will fit any standard fixed VHF-antenna deck-mount.)

5. Using your mounting template, mark and then drill pilot holes for the mounting screws. Then drill a centered hole large enough for the antenna's coaxial cable to fit through.

6. Run the coax through the mount, then through the hole and fish it, as necessary, through the radar arch, hard top, mast, or pipework.

7. With the cable pulled all the way through the boat, use silicone sealant to fill any gaps between the cable and the fiberglass or pipework. Then dab silicone around the mounting-screw pilot holes, seat the mount, and affix it in place.

8. Screw the antenna onto the mount.

Anyone shopping for a marine TV antenna is going to run across Shakespeare's multidirectional line. It offers the super-small 8-inch by 4-inch SeaWatch 3004, which is so compact you can mount it on the smallest cuddy-cabin boats. It costs less than $70 but, as you might expect, offers a rather reduced range; Shakespeare claims up to 15 miles from broadcast towers. The pie-shaped SeaWatch 3015 (about $100) extends out to 40 miles. The SeaWatch 3019 ($150) gets you a maximum of up to 75 miles.

Glomex offers both multidirectional and directional antennas. The Talitha Shark Fin multidirectional options can be purchased alone (the 10-inch model will run you about $100, and the 14-inch one is $30 to $40 more) or in kits that include a variety of gain-control amps and/or splitters. The 14.6-inch directional Polaris, which runs closer to $500, can be aimed via remote control, rotates at five degrees per second, includes internal and external amplifiers, and has an amplifier bypass. This might be a good choice for large boats that spend the bulk of the time at the dock under very stable conditions. 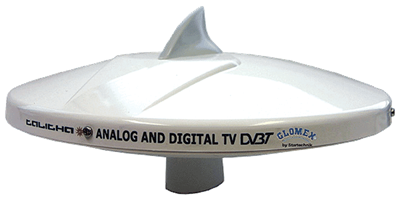 The Digital Yacht DTV100 11-inch multidirectional antenna costs just under $200 and comes with an amplifier with -7-decible to +29-decible gain control. It also comes with adaptors for different mounting options.

Another option is to try one of those simple, inexpensive indoor antennas designed for land use. While we never like to suggest bringing terrestrial gear aboard, these portable plug-ins — the rabbit ears of modern television — sometimes provide shockingly good reception. The $50 Flatview (it's like a paper-thick mouse pad with a cable that you can stick on a window or the cabin sides) reportedly grabs a signal from as far as 30 miles away. But movement of your boat can drastically affect this. www.technicalmarine.com