How one couple used vinyl film as a facelift for their older boat. 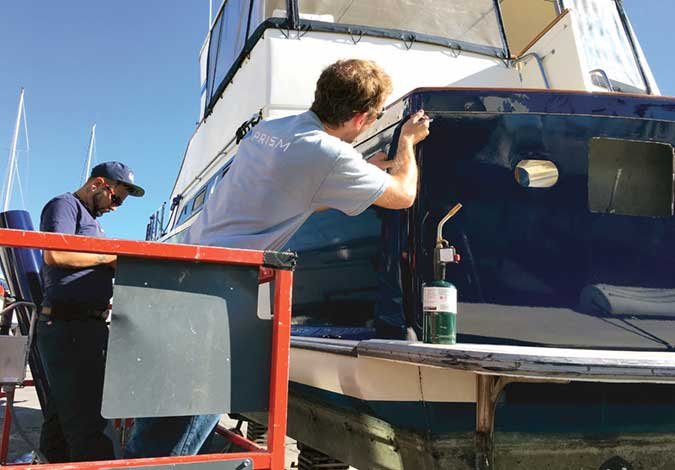 With the boat finally prepped, Brad and his crew got to work. The guys started at the transom and worked toward the stem, so the seams would overlap with the flow of water and wind. The transom wrap was taken around the stern quarter, where the vertical panels overlapped the joints slightly.

Kathy and I found and purchased Pau Hana, a 52-foot Overseas Cockpit motoryacht, in September 2012. Built in 1989, she was starting to show her age with faded gelcoat and the usual dock rash that is typical on a 28-year-old vessel.

We thought a professional cut-and-buff would be the ticket to revive the gelcoat and give her back a youthful shine. Close to $1,000 later, she looked better, but we wanted more. After receiving several quotes from painting contractors that ranged from $30,000 to $45,000, we put the project on the back burner. The cost was just too much.

In the summer of 2016, the Clipper Round the World Race made a visit to our home port of Seattle. I noticed that the boats were vibrantly colored with the logos of their corporate sponsors. Something clicked in my head. I began to research it. I found that wrapping vessels in vinyl is a popular and commonplace alternative to paint, not just with the bass-boat and center-console communities but also with larger powerboats and sailboats, where sponsors come and go and frequent repainting is not an option. The durability of wrap is well documented, as is its colorfastness. Finally, I discovered that removal is fairly easy and has no impact on the underlying substrate.

While vinyl wrapping is by no means the same as a linear polyurethane finish, it isn't meant to be. It is, however, an amazingly effective alternative to traditional paints for both older and newer boats. 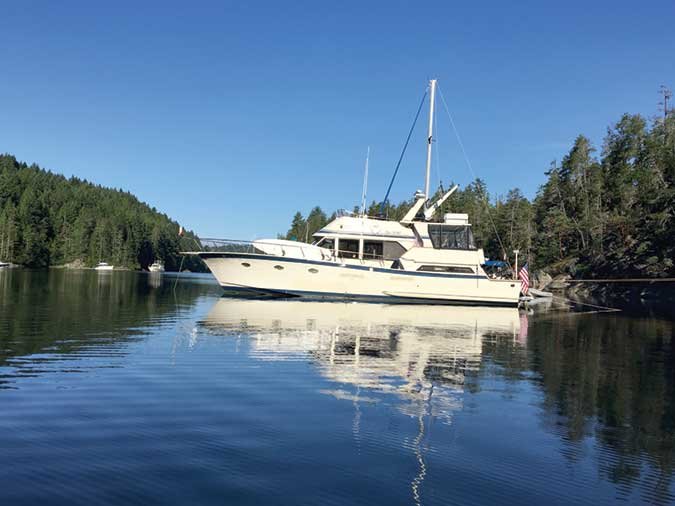 Pau Hana at anchor in her original livery.

After weighing my options, I called Brad Cole at Prism Graphics in Seattle and inquired about his interest in this type of project. It turns out that Brad repaired the wrap on one of the Clipper racers and was excited to jump in and wrap our boat. We discussed options and agreed that the wrap would be only on the lower part of the hull, from the rubrail to the waterline. I scheduled to have Pau Hana hauled out at CSR Marine in Ballard, Washington, and get the project underway.

I removed the rubrail and gave her multiple washdowns to remove salt, oils, and grease on the hull surface. The dry hull was then wiped down completely with alcohol to remove any remaining wax and polish. Next, I repaired any minor imperfections in the gelcoat, as these would show through the vinyl wrap. With Pau Hana on the hard, I also removed all the surface fittings, such as tank vents, engine air covers, and other impediments. She then got a final prep wipedown with alcohol immediately prior to the wrap being applied. 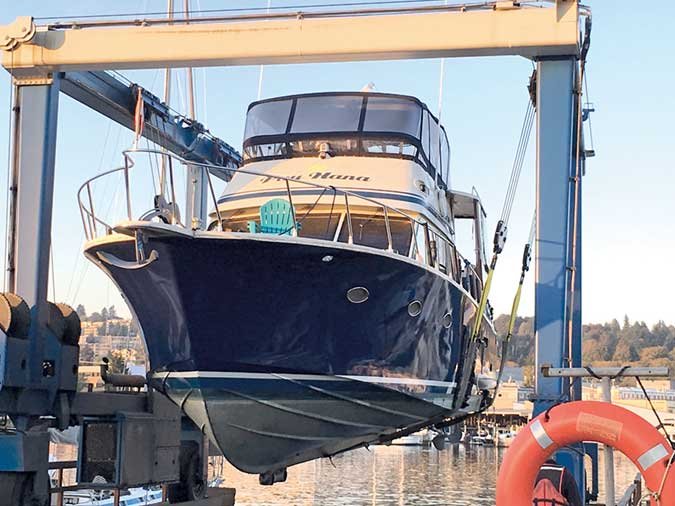 The finishing touch was a cream-colored boat-stripe to offset the indigo-blue wrap.

The total haulout was one week on the hard, as opposed to about two months for a comparable paint job. The total cost (haulout, prep, wrap) was $12,000, one-third what we were quoted for paint. Our boat looks absolutely stunning, and we've received many compliments. Best of all, the color wrap and underwater lights — added as a snap decision while on the hard — thoroughly modernizes her look and adds the perfect element of elegance to a timeless lady.

how to diy install and repair exterior