Getting a First and Second Chance

How one man created the boat of his childhood dreams. 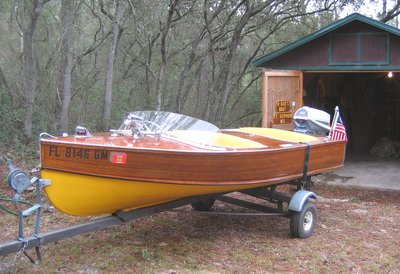 Rex Rothing was visiting his dad, in 1986, at the family cabin on Little St. Germain Lake in Wisconsin's Northwoods when he was offered "the family boat" to take back to Florida. The family boat was already 33 years old and had been sitting on its trailer unattended because, well, now here were newer boats in the crowded garage. Rex took a long look at the 40 which was the only name it ever had because of the 40-hp Evinrude on the transom (they also had a 14-foot Thompson rowboat with a 10 hp outboard) yes, it was named the 10). He thought back to the day his dad bought it - a 1953 Chetek Fiesta 15 from Montgomery Ward and remembered this was the boat from which he had learned to water ski, to fish and, as the all-too-apt saying goes, how to mess about in boats. He didnt have to think about the offer for more than a second and the next day, Rex and the 40 were on a 1,900-mile journey back to his home in Key Largo, Florida.

It was a good match: The boat was a double cockpit built of mahogany and in dire need of attention. Rex had built a successful woodworking shop selling teak cut to order and a number of patented magnetic wooden spice racks (www.magnarack.com), so he had access to all the materials and tools that would be needed. Restoration work began and he and the 40 made an appearance at the respected Mt. Dora Antique & Classic Boat Show held every March where the boat, and Rex's work, received lots of attention because a Chetek wasn't commonly seen. But he soon learned being an expert at woodwork and being an expert at restoration are two very different things. "It began leaking and I'd patch it and then it would leak again and then the motor cracked the head, and that's when I stood back and knew it was time to decide if this boat was going to go to a collector."

He weighed the options in front of him: "If I put another old motor on it, I would still have a leaky oil-sputtering gas guzzler" he surmised," or if I put a new four-stroke on it, I would ruin the antique value of it by changing the cables and cable-pulley steering. Either way, I was in for a complete overhaul of boat, motor, and trailer."

Rex decided to sell the boat to a collector who had both the time and money to do the required work properly. But before doing that, he made another decision: why not take the dimensions of this classic sitting right here and build a completely new boat using modern technology and materials and have something that is all the more seaworthy?

Rex knew the boat had been built in Chetek, Wisconsin, (hence the name) and Montgomery Ward had changed the name to SeaKing. The factory didn't exist anymore although the museum in Chetek had been looking for a boat like this to put on display. But nowhere could he find any of the original plans so he started taking measurements, pictures and notes while laying out the design on paper. Once the plans were in front of him, Rex put out the word that a classic boat was available. A man with a cabin on Lake Chetek, and who already owned a 1952 14-foot Chetek Aquaflier, bought the boat and hired Jan Baskerville in Palm Beach to do the restoration (and from the Department of It Really Is A Small World: Jan also owned a Chetek boat). Rex watched the 40 leave his house knowing he made the right decision. Then, he looked at the paper drawing in his workshop. There was work, a lot of work to do. It was March 2008.

"To make the forms, I used 'reject' 3/4-inch plywood which was a special order through a plywood distributor," he recounts. "It may not be available to most people. The nearest alternative would be CDX ply. For the ribs, stringers, and deck beams I used white oak. The bottom is select cypress below the splash rail. The sides and the deck were made from Key Largo mahogany, which I harvested and milled myself. This wood was provided by hurricanes or other storm damages. Key Largo mahogany is also known as "Cuban" or West Indies mahogany. (Swietenia mahogani). It is a rare species that the Spanish called "the wood of kings." It is very different from big leaf (Honduras) or African (Khaya) mahoganies." NOTE: Mahogany is a protected wood in the United States and cannot be used unless the tree has been knocked over by an act of God, such as hurricanes. 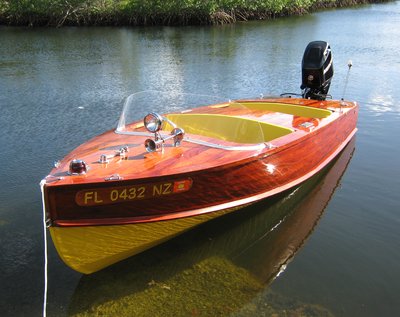 Nearly seven hundred hours and $14,000 later, the boat touched the water for the first time. It had a new 60-hp, 4-stroke Mercury outboard from a local dealer and a new Continental bunk trailer from a nearby trailer dealer. It was December 28, 2009, and in case you're wondering, no, it wasn't named the 60. In fact, it doesn't have a name.

"The first sea trial was a 30-minute quick check of mechanical operating systems, before the rub rail, upholstery, and lights were completed," Rex remembers, noting he was somewhat concerned about the weather that day but more concerned about seeing if his effort after all of this time was going to float. "The wind was blowing like crazy on the bayside and it was a cold afternoon. I went by a little neighborhood oceanside ramp to launch. The tide was going down and I thought to myself, "If I do not get back to this ramp in a half-hour, there won't be enough water to haul the boat out" (the ramp drops off into a canal). But I had to see it float, to check the waterline, and I had to go out to test the propeller size and the boat's abilities. It launched and floated very well." 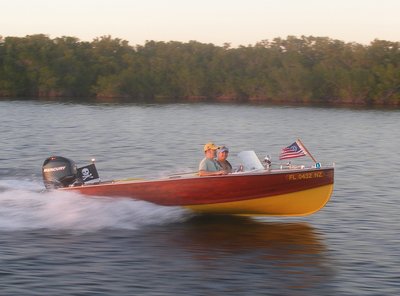 Rex Rothing aboard his Chetek Fiesta 15

Today, if Rex isn't working on a custom-made teak order, he's usually on Blackwater Sound in Key Largo enjoying his own modern variation on a classic: a new and improved Chetek Fiesta. As for the boat that started it all? It's been renovated and is back in Chetek, Wisconsin with new coats of varnish, new upholstery and will soon be cruising Chetek Lake, before going on display in the town's museum. In both cities, the original and the replica are turning heads and taking everyone to a time gone by.