What If Your Temperature Gauge Spikes?

When your engine's got a fever, quick action will often save the patient. Here's what to do when things start to heat up. 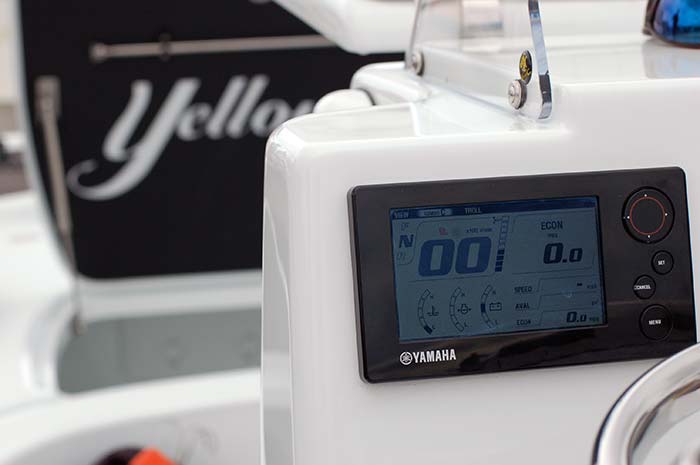 Keeping a close eye on your gauges may save you some headaches later on. (Photo: Mel Neale)

Any number of things can cause your engine's temperature to spike. Some are a serious threat, others are not. The worst possibilities include loss of compression because of damaged rings or valves, lubrication issues, main-bearing problems, misfiring, and more. Any of these normally require a good mechanic and can be pricey to fix. But often, a spike in temperature signals a temporary malaise that will have few long-term consequences if quickly remedied.

1. Check for cooling water coming out of your exhaust or the "pee hole" in the outboard.

If the volume of water has diminished or if there's white steam (which may look like extra exhaust), not enough water is going through the engine to cool it. You'll need to work through the next few items to find the problem. But if the cooling water is spewing out normally, check your voltage. A voltage change at the gauge, as when you turn on the instrument-panel lights, could, in some installations, cause a slight increase in the temperature reading that has nothing to do with the engine.

2. Turn off the engine immediately, if safe to do so.

Do not restart until it cools down to within normal operating temperatures. Usually the engine temperature will continue to increase after shutdown because it's no longer getting any cooling water. Restarting at the higher temperature may ruin the engine. Always wait until the engine has cooled before you work on it.

When debris blocks the cooling water intake or clogs the strainer and restricts water flow, failure to remedy the problem immediately can result in the destruction of the impeller and other more serious problems. Debris in a raw-water strainer for an inboard is easily fixed by turning off the engine, closing the thru-hull valve, and cleaning the strainer. An inboard engine may suck a large piece of debris, such as a plastic bag, onto your strainer outside the hull, particularly if you're moving slowly. On outboards, plastic or even seaweed over the cooling intake vents will prevent water from reaching the engine. Often on outboards and inboards, just shifting into reverse for a moment will clear the debris over the intake.

A sudden high temperature rise can be caused by the breakage of the V-belt on an inboard with an enclosed cooling system. This will cause the freshwater recirculation pump on the forward end of the engine to stop turning. This should be easy to fix with a temporary "fits-all" belt or a spare belt if you have one.

5. Look for connection problems in the raw-water system. 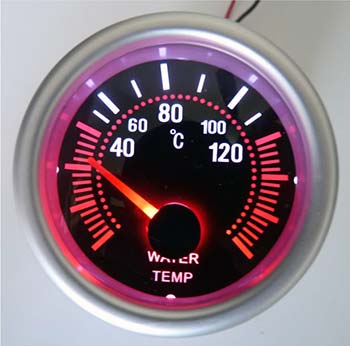 In a freshwater-cooled inboard, a sudden high temperature spike could indicate a busted cooling-water hose or loose hose clamp, which has allowed a hose to back off its nipple. This will also cause flooding. Some outboards may be prone to this. Depending upon the situation, you may be able to temporarily repair a busted hose with Rescue Tape, or simply reinsert a disconnected hose on the barb and tighten the hose clamp. A failed seal on an inboard freshwater recirculation pump will also result in serious water loss and high temperature and probably require a tow.

On many inboard engines, raw cooling water is injected into the exhaust at the riser after passing through the heat exchanger(s). Often, these clog over time from corrosion and heating of organic material in the water. This diminishes raw-water flow. Remove the hose and clean any buildup inside the injection nipple. Take care not to damage the pipe, especially if it has corroded.

7. Make sure there's nothing on the bottom slowing you down.

A bad growth of barnacles and weeds, as can quickly occur in warm, nutrient-rich waters, can increase the resistance of the boat moving through the water and lead to slightly higher temperatures over time. Snagging a crab or lobster pot on your rudder can do the same thing. If you're losing speed as the temperature rises, a dive to clean your bottom or running gear may be all you need to do. Make sure it's safe, the engine is off and the key taken out of the ignition while the swimmer is in the water, there are others aboard who can help you, and that you have the requisite stamina and skills. Always carry a mask, snorkel, and flippers aboard, just for this kind of event.

If Things Are More Complicated ...

If one of the above is the problem, you should be able to deal with it and proceed with your temperature back in the normal range. If not, you're probably not going to be able to remedy the problem on the water, but you may still be able to limp home without doing permanent damage. Exactly how you limp home will depend upon what you think the problem is.

A slow but steady rise in temperature could mean you have a deteriorating impeller in your raw-water pump. Eventually, the impeller may completely strip out, resulting in temperatures rising quickly to a very high level, leaving you stranded. Also, parts of the impeller could lodge downstream, causing blockage and exacerbating the problem. Changing an impeller on an inboard can be difficult, even if you have a spare. If you have an outboard, you don't want to even think about changing the impeller at sea, as the job requires dropping the lower unit. Rather than tackle this job on the water, head home very slowly, keeping a close eye on that temperature gauge, and stop if it starts to spike — or call for a tow. Changing the impeller at least every two years goes a long way toward ensuring you never find yourself in this situation.

If you've seen a gradual increase in running temperature over time, your cooling passages may be restricted. Scaling in your engine's cooling passages — including heat exchanger(s) in inboards — will occur with age unless you regularly clean them. Outboards may be more likely to suffer from corrosion or scaling within their cooling passages because these passages are typically aluminum. This will be less of an issue with outboards used in fresh water or flushed with fresh water after use. This can seldom be fixed at sea. It develops slowly, but if it's causing your engine to slightly overheat, running slowly back to the dock may be fine, watching the gauge to be sure that the temperature doesn't get too high. 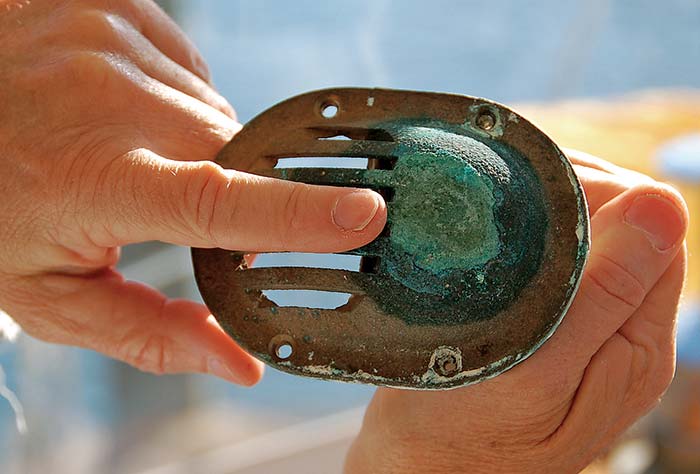 Finally, the gauge may be going up because your thermostat has failed. While occasionally a thermostat gets stuck in the partially open position, it's more typical that it fails in the closed position, blocking water flow completely. Usually the location of the thermostat on outboards and inboards is obvious, and it's relatively easy to remove the housing, taking care to preserve the gasket. If you have an outboard, the cooling water is probably salt or brackish (unless you operate in a freshwater lake). Corrosion and debris around the thermostat suggest it may have failed. If you have an inboard with freshwater cooling, the thermostat should be clean, but it may still fail. If you suspect thermostat failure and don't have a spare, pull out the bad one and replace the cover, taking care to reinstall the gasket. Watching your gauge, proceed directly in. The engine will probably run too cool, but this shouldn't hurt for the short run back to dock. If the problem is elsewhere, sometimes removing the thermostat will let just enough cooling water through to allow you to get in, although this is risky depending on what's actually causing the problem. Opening the thermostat housing on an inboard with freshwater cooling will often mean that you must add more fresh water and antifreeze to the system to replace what has spilled out.

If you can't diagnose the problem but there's some water coming out, you may be able to get back home by running slow and watching the gauge. But, you may risk additional damage if the water flow decreases as you run. This means the problem is worsening and the gauge will probably read higher. If you reach the point where there's little or no water coming out, call TowBoatUS Note that with some outboards, your forward movement may force a little water through the cooling system, but this may not be enough to sufficiently cool the engine, even when running slowly.

After any overheating situation on any engine, it is prudent to replace the impeller, which may well have been damaged. Whenever you have overheating in an engine with contained coolant, check to see that you haven't lost coolant through heat expansion. When the engine overheated, you probably noticed the smell of antifreeze. This coolant must be replaced and the cause investigated. To avoid getting burned, wait until the engine cools before opening the closed raw-water system.

If your engine catches a fever, don't despair. In most cases, the patient needs a little examination and some minor treatment, and then you'll be on your way again.

One of the top technical experts in the marine industry, Tom Neale, BoatUS Magazine Technical Editor, has won nine first-place awards from Boating Writers International, and is author of the magazine’s popular "Ask The Experts" column. His depth of technical knowledge comes from living aboard various boats with his family for more than 30 years, cruising far and wide, and essentially learning how to install, fix, and rebuild every system onboard himself. A lawyer by training, for most of his career Tom has been an editor and columnist at national magazines such as Cruising World, PassageMaker, and Soundings. He wrote the acclaimed memoir All In The Same Boat (McGraw Hill), as well as Chesapeake Bay Cruising Guide, Vol. 1. These days, Tom and his wife Mel enjoy cruising their 2006 Camano 41 Chez Nous with their grandchildren.