Insurance is one of those things you buy hoping never to use. If you do have to use it, though, you expect your boat insurance to pay "to fix the boat," whatever that means to you. If you haven't taken a close look at a potential policy, you could end up blindsided by clauses that exclude coverage for certain types of damage. You don't want to wait until you make a claim to find out if you're getting what you think you're paying for. BoatUS has taken a look at the most common claims in our Marine Insurance program. Digging down into what lies behind that list highlights five ways that some boat insurance policies fail to live up to expectations. 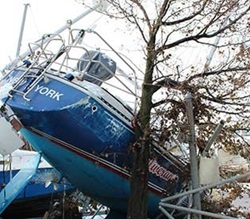 Hurricanes head our list of total claims payouts over the five-year period. But hurricane activity varies greatly from year to year, and in 2009 and 2010, hurricanes didn't make it into the Top 10 at all. Take hurricanes out, and sinking tops the list. Keeping the water out is a constant battle. Half of all sinkings that occur at the dock happen when some small part below the waterline gives up the fight. The most common culprits include stuffing boxes, outdrive bellows, hoses or hose clamps, and sea strainers. But those parts most often fail due to what insurers call "wear, tear, and corrosion," meaning that the part succumbed to general aging and deterioration. Most insurers exclude losses from "wear, tear, and corrosion," so they won't pay for the failed stuffing box. But what about your boat that's now sitting on the bottom? Some policies won't cover that, either, because they exclude any "consequential" damage that results from wear, tear, and corrosion. Others will cover the resulting damage as long as it falls into very specific categories, most often fire or sinking. The most generous policies would cover your boat that just sank, plus the other losses likely to result from a failed part: fire, explosion, collision, dismasting, and grounding/stranding. 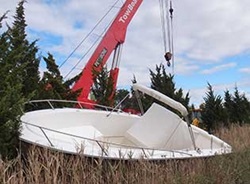 Hurricanes do head the list for 2008 to 2012 as a whole. In every hurricane, boats get scattered hither and yon, and after the storm they need to be salvaged — rounded up and returned to where they belong. That takes Travelifts, cranes, flatbed trucks, and other heavy equipment, and it can cost hundreds of dollars per foot of boat length. In some insurance policies, the money to pay for salvage is deducted from what you get to fix the boat. Other policies pay salvage in addition to the money to fix the boat, but will only cover salvage up to 25 or 50 percent of the insured value. The most generous policies provide separate salvage coverage up to the insured value of the boat, in addition to payments made for the boat and its equipment. Not in a hurricane area? Everyday events can still result in such salvage claims as a serious grounding, hitting an underwater rock or floating log, or running into another boat. In fact, the first seven items on the BoatUS Marine Insurance list can involve salvage. Reason enough to be sure you understand how that would be handled under your policy. 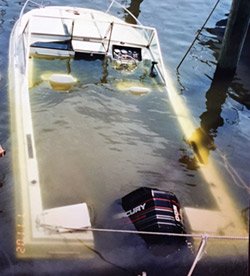 Hurricanes, other wind and weather events, fire, explosions, and sinking could also destroy the boat beyond repair, leaving behind only a wreck. Most people assume their insurance company will cover the cost of cleaning up what's left. But some insurance companies will give you a check for the insured value plus a specified percentage (5 to 10 percent of the insured value is typical) and walk away, leaving you to pay for the wreck removal, and to arrange it. The most generous policies cover wreck removal out of the liability coverage and will pay up to the liability limit (usually $100,000 or more) to clean up the mess. Boats don't just get wrecked on shoals. They can also be destroyed by sinking, fire, and extreme weather. So four out of the top five items on our list could involve wreck removal.

Again, it pays to read the fine print to understand what you are — or are not — getting. Some policies pay the cost of cleaning up a fuel spill only if it occurs due to a "covered loss." So if your sunken boat wasn't covered because the stuffing box failed due to wear, tear, and corrosion, the resulting fuel spill wouldn't be, either. Some policies pay fuel-spill liability out of the overall liability limit for the policy, and it is lumped together with other liability payments. So if you have a collision that injures someone and the contents of your gas tank end up in an environmentally sensitive area, the payment for both the injury and the spill will come out of the same pool of money. The most generous policies separate out fuel-spill liability and provide coverage up to $854,000, the maximum amount for which you can be held liable under federal law. 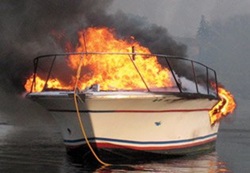 Injury comes in at number eight on the BoatUS Marine Insurance payout list, not because there are that many injury claims, but because the settlements tend to be very expensive. If you're already insured, it costs very little to increase your limits, so it's worth checking how much liability coverage you have and comparing it to your auto and homeowner's policies.

Uninsured because your boat isn't worth that much? You're leaving yourself open to a six-figure settlement if someone gets injured in a collision or while skiing off your boat. Shop around for a liability-only policy just to see what it would cost; you might be pleasantly surprised. But make sure you're comparing apples to apples by taking a good look at the policy language before purchasing. The most comprehensive liability-only policies cover not just personal injury but also salvage, wreck removal, and fuel-spill liability.

When it comes to insurance, you get what you pay for. If you compare only the premium rates when you're shopping for boat insurance, you may feel let down if you ever have to file a claim.