Everyone's bucket list is unique to them. For Al Michaud, it was to sail on the waters of every state of the union. 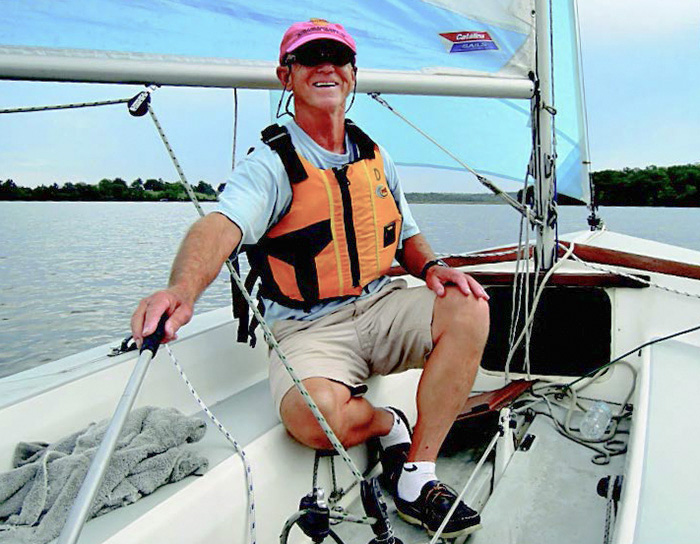 BoatUS Member Al Michaud is from Michigan, but he has sailed the U.S. from coast to coast. | Photo: Courtesy, Al Michaud

Al Michaud's bucket list was simple: sail a boat in all 50 states. The reality was harder and more complex. Nearly two decades ago, Michaud, a BoatUS Member from Monroe, Michigan, who sails a Hobie 33, realized that he'd already sailed in a dozen states, so why not strive for all 50? The rules were simple: He'd sail a boat in every state, no matter who owned the boat, how far he went, or how big the water. "As long as it had a sail, it qualified," he says.

An experienced racing sailor, Michaud knew that if you could talk to the right people, you could often get a ride as crew. About half of the states he sailed were in sailboat races. "Most of my research was done online. I was fortunate to meet a lot of friendly sailors by hitching a ride on race day," he says. Other states were a bigger challenge. "North Dakota. That was maybe the hardest. I came across the blog of a person who sailed on Lake Skakawea and sent him a message. The next thing I knew, I was invited along."

The logistics of his bucket list was daunting. Michaud had to fly to North Dakota and rent a car to get to the boat. But it was worth the trip, he says. "The guys couldn't have been nicer." What sailor wouldn't want to help a fellow sailor complete his state-by-state bucket list?

If he wasn't crewing on a racing boat, sometimes Michaud rented a boat. Sometimes the boat cost nothing. New friends were made. Once, while on business in Hawaii, he tried to crew in the Kenwood Cup race but didn't have the fancy logo-infused clothing. Instead, he headed out to see the race on a chartered sailboat. "It was a slow full-keeled boat, and by the time we got out to where the race was, they were already gone," he says.

Alaska is another state with hundreds of miles of coastline. He ended up connecting with the Alaska Sailing Club as crew on a 22-foot Ensign on Big Lake, about an hour north of Anchorage. Race morning was rainy and he figured the sail was a bust, but no! "Alaskans are hardy souls, and my host said a little rain won't hurt us, so off we went."

A few years ago, Michaud realized that he wasn't going to make his goal if he only visited one or two states a year. He bought a trailerable Capri 14. On one trip, he knocked out five states in five days, trailering the boat through Nebraska, Kentucky, Arkansas, Oklahoma, and Missouri. "That was one of the biggest challenges, driving a halfday, rigging, launching, derigging, and trailering to the next place." A few weeks later he and his wife made another road trip with the Capri and checked off Tennessee, Alabama, and Mississippi.

Last year, he went to Salt Lake in Utah for a race. It was blowing 25 to 30 knots when he showed up to attend the skippers meeting and the lake was solid whitecaps. The race was called off. "I was thinking ‘I just traveled 1,600 miles (not to mention airfare), and I won't get to sail!" he exclaims. Luckily, one of the crewmembers owned a Catalina 27 that could get out of the harbor, and the owner was game. "By the time we threw off the docklines, the wind began to abate and we were able to have a really good ride," he says.

He finally filled his bucket list in fall 2018, having sailed boats ranging from an 11-foot windsurfer to an 89-foot schooner. "It wasn't easy. This is a BIG country," says Michaud. "It surprises me that I actually completed it. Having a very understanding wife helped!"