A brewing trade war makes for uncertain times for boatbuilders — and maybe buyers. 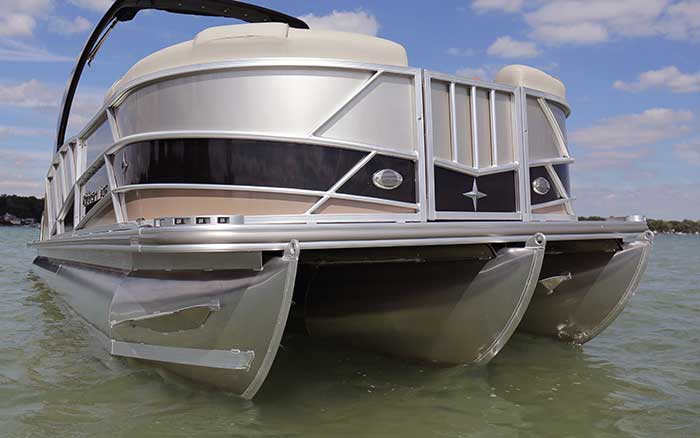 New boat buyers should keep an eye on prices as the Trump Administration's tariffs take hold of international trade.

On June 18, President Donald Trump announced a total tariff on aluminum from China of about 200 percent and an additional 10-percent duty on aluminum imported from Canada, Mexico, and the European Union. Boatbuilders — in particular aluminum boat builders — will likely be hit hard as the price of aluminum increases.

According to the National Marine Manufacturers Association (NMMA), aluminum boats account for about 44 percent of all new boat sales. Other boatbuilders and accessory makers may be hurt as well because aluminum is also used in the manufacture of fuel tanks, boat lifts, boat trailers, and other boat parts.

The President's tariffs on Chinese aluminum include a 167-percent antidumping duty, a 33-percent countervailing duty, and another 10-percent Section 232 tariff (duty on imports of steel and aluminum). An additional 300 marine products imported from China that are used on boats are also subject to a 25-percent tariff.

While most U.S. manufacturers get the majority of their aluminum domestically, the tariffs are expected to disrupt the world market and are likely to substantially raise aluminum prices. Thom Dammrich, president of NMMA and member of the BoatUS National Advisory Council, told BoatUS that as of early July, aluminum prices are already up by 27 percent. It's not known what the long-term implications are, though Dammrich says that if the tariffs continue for more than 90 days, they could force businesses to lay off employees and cancel expansion plans.

Dammrich says it's unknown how the tariffs could affect the price of boats, but he believes most builders will try to cut other costs to keep prices from rising, though some may have to pass on the costs to buyers. Pontoon and aluminum fishing boat manufacturers will be hit particularly hard, says Dammrich.

There's more bad news for U.S. boatbuilders: Because of the U.S. tariffs, boat manufacturers are also faced with a retaliatory tariff on boats sold to Canada, Mexico, and the European Union (EU). Canada announced a 10-percent tariff on boats sold in that country, Mexico said its tariff is 15 percent, while the EU has announced a larger 25-percent tariff. Mexican tariffs went into effect in late spring, while European tariffs began June 22, followed by Canadian tariffs on July 1.

Dammrich says that boat sales to Canadian and European buyers account for 70 percent of U.S. exports. The larger EU tariff will likely make selling U.S.-built boats in Europe harder. According to Dammrich, Beneteau, who builds many boats in Michigan for export to the EU, is considering moving its production back to Europe to avoid the tariffs, with corresponding layoffs if the retaliatory tariffs continue. Dealers in the EU have already canceled orders because the U.S.-made boats are suddenly no longer competitively priced. The tariffs also have an adverse effect on boat dealers in the EU because they can no longer sell popular U.S.-made boats at competitive prices. According the NMMA, 22 percent of boat exports — or nearly $340 million worth — are sold in the EU.

NMMA states that the boatbuilding industry is uniquely affected by the tariffs and is the only recreational industry facing retaliatory tariffs from Canada, the EU, and Mexico. The retaliatory tariffs apply to all boats, not just those made of aluminum. Dammrich believes they are being targeted for the biggest political impact because U.S. boatbuilders have a uniquely strong market for their products, and many builders are located in states that backed President Trump.