Navigating the Challenging Waters of Washington

When BoatUS was founded in 1966, we went to work advocating for recreational boaters in the federal legislative and regulatory arenas. That hasn't changed. Here's a snapshot of issues we're focused on for 2018. 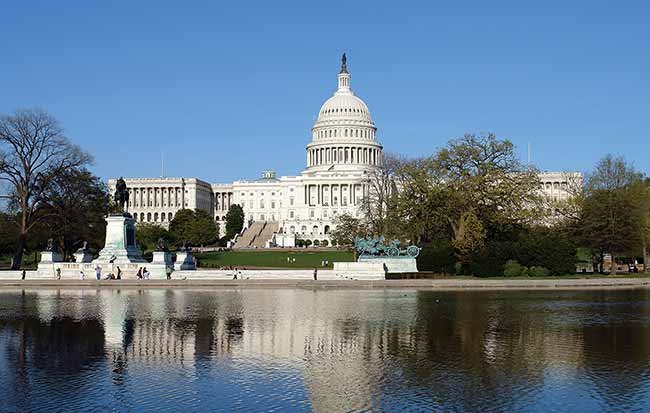 As we have done for more than 50 years, the BoatUS Government Affairs department continues to monitor and help shape legislation that affects boaters at the national, state, and local levels. (Photo: Bigstock.com/sborisov)

In any given year, the BoatUS Government Affairs department provides legislators with the recreational boater's perspective on a raft of issues — national, regional, and local. We are your voice to policymakers, and we value your input about what concerns and affects you on the water. Our strategy in advocacy is multifaceted, including:

As we approach a new calendar year, here are some likely front-and-center topics that will be up for discussion in the halls of power in our U.S. capital.

If you follow media coverage of the federal budgeting process, you know Congress and the Trump Administration continue the back-and-forth over the 13 federal spending bills that must be approved in order to implement the fiscal year 2018 budget. The initial unveiling of the FY 2019 budget is expected in just a few months. As budget proposals and counterproposals proliferate, we work to keep close tabs on the funding status of certain federal agencies with regulatory authority that can affect recreational boating.

At this time of year, we monitor what money is going where and why. We do this by being a persistent presence for boaters on Capitol Hill. With BoatUS national headquarters a short distance away, our Government Affairs staff can meet with members of Congress and congressional staff on a regular basis, and on short notice when necessary. This one-on-one relationship makes all the difference when a critical boating issue arises.

Earlier this year, for instance, BoatUS testified before Congress on the issue of boater access to national parks. Our message to Congress was twofold: We need our national parks, which are public property — lakes, rivers, coastal embayments — to stay accessible for recreational boating and sportfishing. And, boaters are among the strongest advocates for clean water and healthy natural resources, so boating should be accommodated accordingly.

As a lead agency for the Department of Homeland Security, the overall U.S. Coast Guard budget has held up fairly well in the current budget debate. While much of the attention — and funds — goes to upgrading the bluewater vessel fleet like the Legend Class of 378-foot national security cutters, our BoatUS Government Affairs team continues to advocate funding for less-flashy Coast Guard services that boaters depend on, like inshore search-and-rescue, aids to navigation, and boating safety. We also keep watch for new proposed regulations, making sure they're practical for how boaters actually enjoy the water. 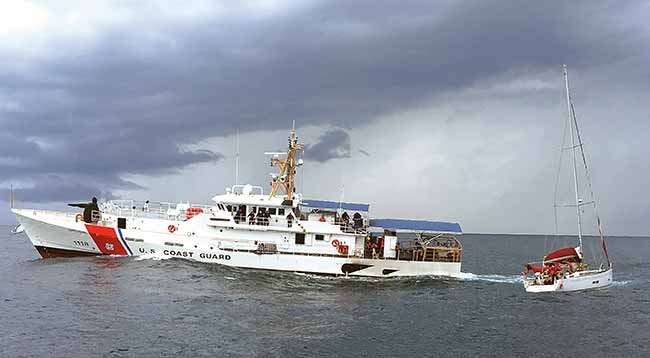 For example, in some regions the Coast Guard is transitioning to virtual aids to navigation (ATONs). These appear on electronic chartplotters but are not actual structures, such as buoys, day markers, or light towers that you can see in the water. While virtual ATONs can be an asset in emergencies, like restoring safe navigation after a hurricane, our argument to the Coast Guard is: Don't assume that all recreational boats are equipped with up-to-date electronics that can utilize this kind of technology.

Casting A Line On Funding

As the federal agency that administers funding programs that are crucial to boating — think vessel pumpouts, boat ramps, fish habitat, invasive species prevention — the U.S. Fish and Wildlife Service is always on our radar. With about $600 million coming from excise taxes that boaters and anglers pay annually on boat fuel, fishing equipment, and other accessories, it's critical to ensure that our boating tax dollars continue to help make boating and fishing better. Historically, the service distributes these funds back to state boating and fishing agencies through the Sport Fish Restoration and Boating Trust Fund, a mechanism that BoatUS helped Congress create over 30 years ago.

The good news is that Congress reauthorized the Trust Fund in 2015, through 2021. Despite its being secure for the next four years, it takes our constant vigilance to keep these dollars out of the budgetary crosshairs. Our strategy for a 2021 reauthorization begins next year; stay tuned.

Keeping The 'B' In Washington's Alphabet Soup

A top priority for the recreation community is keeping open and accessible public waters — federally managed recreation lakes and waterways, and the nation's inland rivers. There is pressure for attention and dollars within agencies of the Department of the Interior — National Park Service, Bureau of Reclamation, Fish and Wildlife Service — as well as the U.S. Forest Service and Army Corps of Engineers.

We make a strong, simple case to these agencies: The reason people work so hard is so they can then enjoy themselves, and boating is a big part of that enjoyment.

Coming into 2018, we're seeing a new emphasis on “enhancing recreational opportunities across all public lands and waters" emerging in Washington. To that end, there is strength in numbers on the congressional lobbying front. BoatUS is one of 18 outdoor industry associations that made an unprecedented move this year to join forces to create the Outdoor Recreation Industry Roundtable and to strategically work together for the benefit of American outdoor recreation. Taken together, those who enjoy boating, RVing, fishing, hunting, and other niche groups make up 142 million Americans who enjoy our nation's parks, waterways, and byways. That's a number of consumers that policymakers can't ignore.

As the lead agency for many of the programs crucial to boaters and anglers, the National Oceanic and Atmospheric Administration and its sub-agencies (National Weather Service, National Marine Fisheries Service, and others) are always on our Government Affairs watch list. Recreational fishing is at the top of Congress's to-do list for 2018. With the reauthorization of the Magnuson-Stevens Fisheries Conservation and Management Act a critical issue this year, saltwater anglers are counting on having policies that provide reasonable opportunities to catch fish while protecting the resources for all. 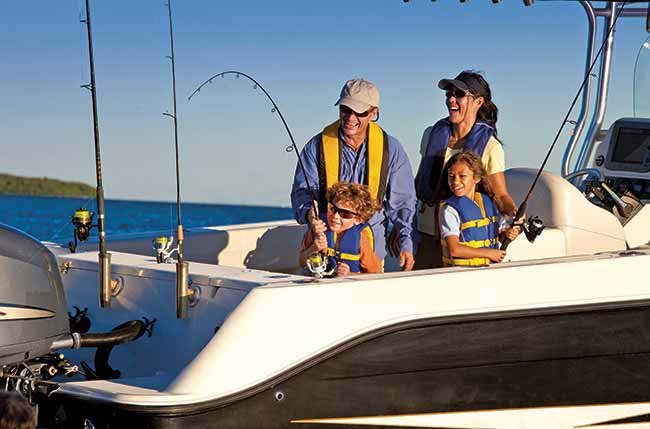 The goal of the Modern Fish Act is to make a clearer distinction between recreational and commercial fishing. (Photo: RBFF)

So we'll be on Capitol Hill advocating for the Modern Fish Act (Modernizing Recreational Fisheries Management Act of 2017). The goal of the bill is to improve data collection on fish catch for commercial vs. recreational fishing. Ultimately, as recreational anglers, we want clearer distinction from commercial fishermen. We're focused on the reasonable opportunity to catch a fish versus the maximum yield sought by the commercial side. We're different than commercial, and we will work until the people who manage commercial fishing recognize that.

The Water Resources Development Act, up again for its biennial reauthorization, will be a centerpiece of the federal "nfrastructure" bill anticipated in 2018. While the bulk of the maritime transportation piece of that legislation focuses on large ports and inland waterways that support commercial shipping, BoatUS is already laying the groundwork to ensure that projects such as the Atlantic Intracoastal Waterway, sportfishing harbors in various parts of the country, and the shallow-draft ports of the Great Lakes are not left behind. We're working to make policymakers see that, yes, there are shallow ports with little commercial cargo that are still critical as public waterways for recreational boaters and anglers, and the local waterfront economies that sustain them.

The Outlook For Ethanol

The Renewable Fuel Standard (RFS) of 2005 — the bane of boats large and small — continues to cause problems for gasoline engines of all types. Originally passed to help spur the use of “green" biofuels, the law forces refiners to blend ever more ethanol, the corn-based alcohol additive, into gasoline. And it's a big problem for more than just boaters. While today's gas-powered marine engines can handle E10 with proper maintenance, higher levels of ethanol can wreak havoc. Yet, in 2010, to satisfy the RFS mandate to increase ethanol use in gasoline, the U.S. Environmental Protection Agency (EPA), under pressure from the corn/ethanol lobby, decreed that refiners could up the “E" content in gasoline to 15 percent

While the EPA has proposed a slight reduction in the overall RFS mandate for 2018, boaters will continue to see higher levels of ethanol at the pump — and likely find ethanol-free gas harder to locate — unless we can reform this broken policy. As a member of the Smarter Fuel Future Coalition, BoatUS will continue to make the case, strongly, to Congress and the administration.

The ethanol battle is one for which we occasionally need your help, in the form of voicing your opinion to your representatives. Watch for more Action Alerts from us in your email inbox, asking you, as a boater, to speak up against increased ethanol-blended fuel. Again, there's strength in numbers. Your voice matters.

State Issues On The Horizon

With states taking on a more prominent role for boaters, BoatUS continues to make your voice heard on the state and local levels. Once again, this is another area where our members need to be ready to step up; you are our number-one tool to sway opinion among decision-makers.

Recovery from this year's storms will be front and center for many Florida, Texas, and other Gulf Coast communities, making engagement with the states vital. We'll also see the beginning of the implementation of mandatory boater education in California, a process that will roll out over the next several years.

“We don't have a crystal ball to tell us what's on the public-policy horizon as far as boating issues go," says BoatUS Senior Government Affairs Manager David Kennedy. “But we work every day to stay on top of these and other issues. We have a critical asset many organizations don't: our engaged members who alert us to regulatory issues and legislative developments where they live and use their boats." If you have comments or insights to the issues outlined here, or any that may surface where you enjoy your boat, we want to hear from you. Email GovtAffairs@BoatUS.com.

Ryck Lydecker is a fisherman and part of our BoatUS Government Affairs team.