The past year has seen a number of heavy-hitting advancements in the world of marine engines. Here's a rundown of what's new and notable. 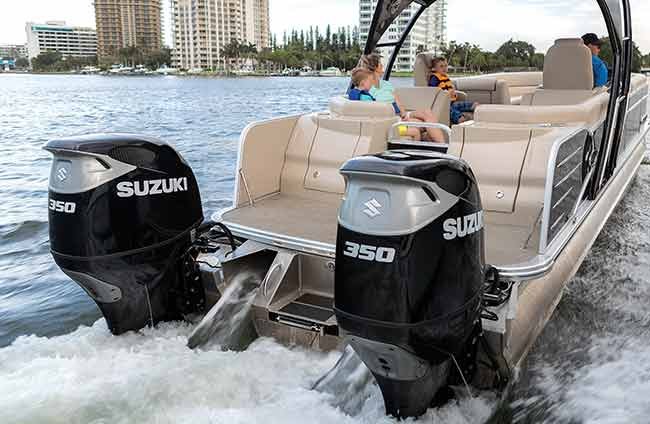 With the advent of four-strokes and cleaner two-strokes, the past two decades have seen a sea change in the world of outboards. One might think that, at this point, all the major-league developments would have taken place by now, but one would be wrong. In the past year there have been a number of notable advancements that deliver more technologically advanced, lighter, easier-to-use outboard engines and power systems. Add to that several advancements in inboards, diesels, and control systems, and there's a horse race on as new power hits the water in 2018. 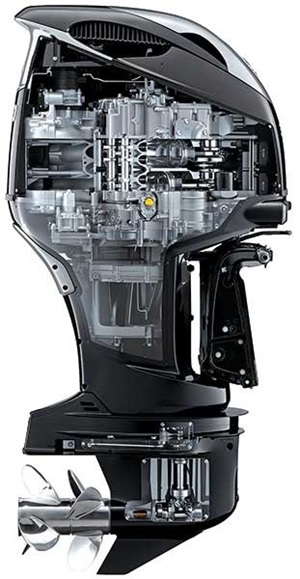 The biggest recent news was made by Suzuki when it announced the DF350A last summer. This is no redesign or amped-up engine built on an older block, but a completely fresh design with a unique touch: twin contra-rotating propellers. Contra-rotating props spin in opposite directions on a single shaft (as opposed to counter-rotation props, which spin on two different shafts), which boosts the prop's bite on the water, counteracts steering torque and, perhaps most importantly, allows for a dramatic increase in overall blade area.

Today's larger outboards need to move big, heavy boats, and many struggle to deliver the torque necessary to get all that weight on plane. The twin props have 80 percent more blade area, providing gobs of lift to help push the transom up and the bow down. While most of us are familiar with dual-propeller applications on sterndrives (such as the Volvo-Penta DuoProp and the Mercury Bravo III), the DF350 is the only outboard currently on the market to offer it.

Aside from the unusual propeller system, the DF350A earns the status of being the largest-displacement four-stroke V-6 engine designed for an outboard on the market today, with a 4.4-liter V-6 powerhead. It's also one of the heavier models around, tilting the scales at 727 pounds (other 350s on the market range from 668 to 804 pounds). Design enhancements utilized to create all this power include 10-hole fuel injectors, which deliver a fine mist of highly atomized fuel to ensure complete burn efficiency; variable camshaft timing, which adjusts it to engine rpm for increased fuel efficiency; shot-peened slipper pistons with tiny dimples on the face to more evenly distribute the pressure created during combustion; a fuel cooler; and a low-maintenance oil-bathed self-adjusting timing chain. Like some other outboards producing this much power, the DF350A needs 91-octane fuel to perform at its best.

Yamaha never seems to be satisfied, as proven by its redesign of the ever-popular F90 four-stroke, and a less powerful version, the F75. The engines benefit from a 13-percent increase in displacement in the form of 1.8 liters as compared to the previous versions' 1.6 liters. Yet weight and overall size drop. Yamaha shaved off 13 pounds, bringing the F90 down to 353 pounds (362 pounds for the 25-inch long-shaft version). Another change Yamaha made was switching from a dual overhead cam design to a single overhead cam, which was what allowed the motor to slim down in size. 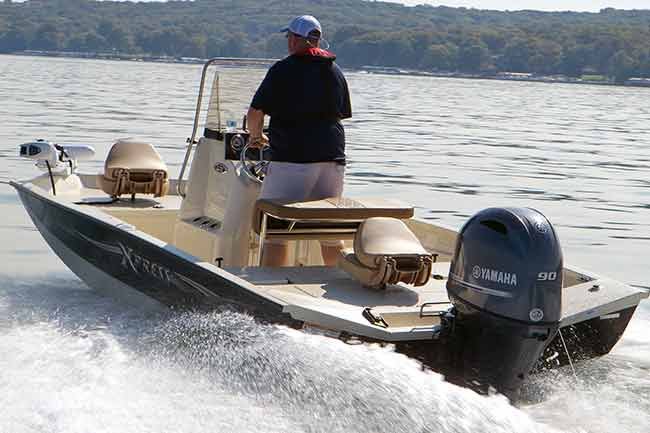 When we ran the F90 (on an 18-foot Xpress bay boat), we found that the increase in displacement can be felt at the helm — when you nail the throttle, the engine releases a neck-snapping burst of additional torque. We also noted a stingy fuel burn of just under 5 gallons per hour at a 4,500 rpm cruise.

Another intro of note for Yamaha this year was the new F25. This model is not only 25-percent lighter than last year's 25-horse outboard, it's also the lightest 25-horse outboard being produced today. On top of that, this two cylinder, 26.4 CID (cubic inch displacement) engine has batteryless electronic fuel injection, or EFI, which means one-pull starts (though it did take us two tugs when we didn't yank vigorously enough) and most importantly, as the fuel system is pressurized and contained, carburetor-related ethanol issues become a thing of the past.

Finally, Yamaha also introduced a new 2.5-hp mini-might for use on dinghies and very small boats. This is a one-cylinder 72 cc eggbeater that weighs in at 37 pounds. The integrated fuel tank holds 0.9 liters, and a pressurized leak-prevention system means you can lay it down in your car's trunk without fuel or oil leaking out. The engine has forward and neutral, and spins 180 degrees to apply reverse power.

We haven't seen any fresh power plants from Evinrude or Mercury in the past 12 months, but both have introduced new forms of control systems. Evinrude rolled out its new-generation iDock joystick, designed to work with its E-TEC G2 line. What gives this system a leg up over most is the integration of an aircraft gyro sensor, making the system smart enough to compensate automatically for wind and current. When we tested the system on a pontoon boat and a center-console, we could tell the difference. Added bonus: With an MSRP of $5,999, iDock is significantly less expensive than many competing outboard joystick-control systems. 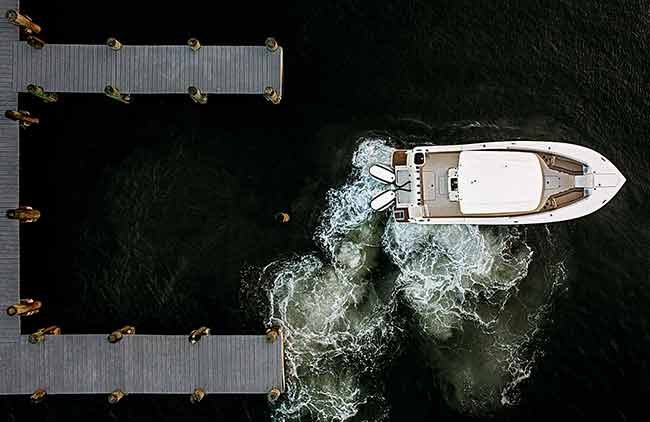 Evinrude rolled out its next-generation iDock joystick system for its E-TEC G2 line.

Mercury's enhancements relate to inboards, as opposed to its outboard line. Joystick piloting for both single- and twin-engine applications is now available for inboards, including Skyhook with three new features: Heading Adjustment, which allows you to adjust heading in 1- and 10-degree increments; BowHook, which unlocks heading and maintains position, allowing the heading to be dictated by wind and current; and DriftHook, which maintains heading while unlocking position. 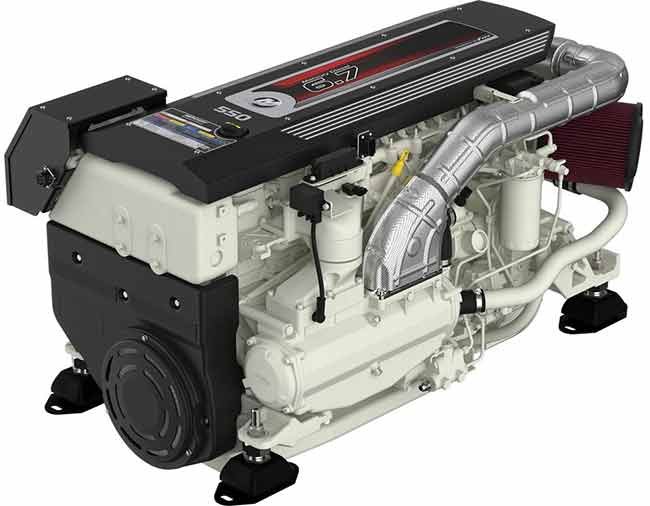 Mercury also rolled out a new diesel inboard model this year, the 6.7L in 480-, 500-, and 550-horsepower models (which are expected to be available in early 2018). These common-rail turbocharged engines are available either with straight-shafted inboards or as Zeus pod drives. Electronic control comes via the Bosch EDC17 controller, and SmartCraft controls and electronics are fully compatible.

On top of all that, Mercury has also announced VesselView903, the company's largest and most advanced multifunction display yet, which incorporates the features of the 703 and a bright 16-by-9 aspect ratio high-definition touchscreen with glare-reducing coating and dimmable lighting. It can handle displaying up to four engines simultaneously and provides engine information for more than 30 data points.

Honda has three new options in the form of jet propulsion. It's now offering 40-, 65-, and 105-horse models. Like all jet-drive outboards there's a power loss as compared to propellers (the 40 is based on the BF60, the 65 is based on the BF90, and the 105 is based on the BF150 powerheads). But all of these models incorporate Honda's clean-burning, performance-enhancing features, like multiport programmed fuel injection, overhead camshaft design, and lean burn control.

Volvo-Penta upped the ante this year with the newly introduced D13 1,000-horsepower diesel inboard, providing 11 percent more power than the previous top offering available for IPS drives. Volvo claims that in IPS form, this package produces the equivalent of a 1,350-hp traditional inboard. The power boost comes from new pistons, more efficient fuel injectors, and an improved cooling system. Volvo-Penta says the new D13, which was announced at the 2017 Fort Lauderdale International Boat Show last November, will be available in twin-, triple,- and even quadruple-engine installations. 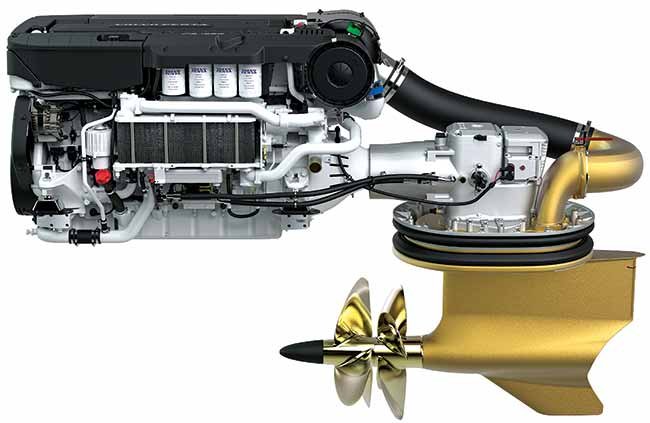 ZF is setting out to shake things up with its new Project Disruption, a straight-shaft inboard drive system that incorporates twin contra-rotating props on a single inboard drive shaft. The usual advantages of twin props and the increased blade area it provides — improved efficiency, an elimination of propeller steering torque, better acceleration, and an improved bite on the water when reversing — are all expected to go hand in hand with the new system. 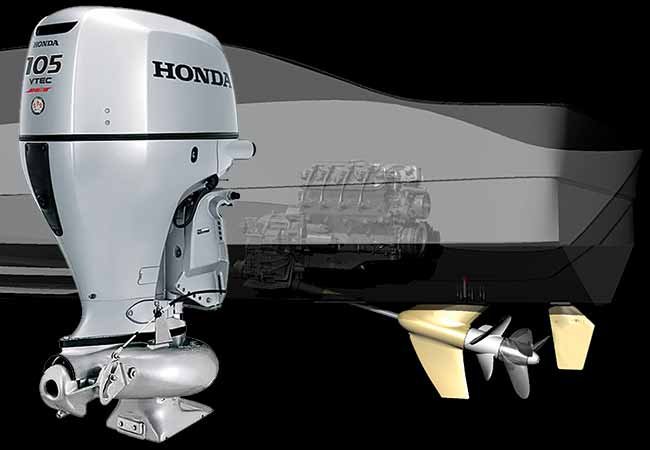 ZF believes Project Disruption, which was made possible with the incorporation of a slim hydrodynamic gearbox housed on the strut, will be scalable and may apply to boats of all sizes. The initial benefit, however, is expected to be utilized by tow-sports boats, where single-engine shafted inboards are often the preferred drive choice.

Top tech writer and accomplished sports fisherman, Lenny has written seven books, won 30 awards from Boating Writers International — many for his marine electronics articles — and two for excellence from the Outdoor Writers Association of America. Angler in Chief at FishTalk magazine, he judges the NMMA Innovation Awards