Danger in the New Shallows 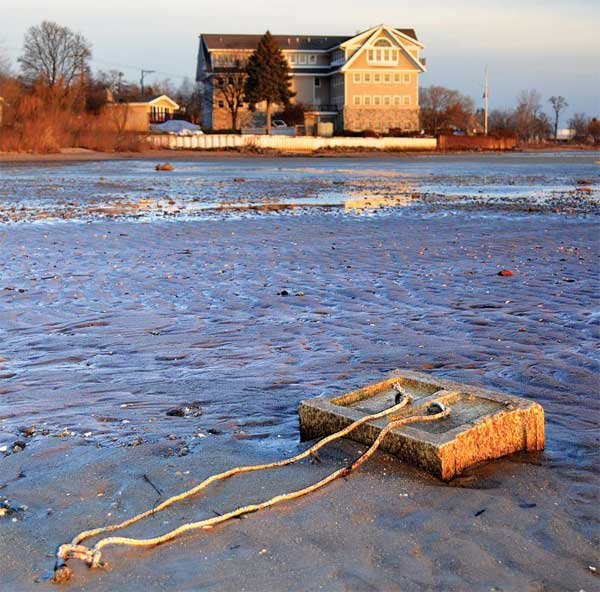 One sultry late August evening last summer, the TowBoatUS dispatchers started receiving phone calls asking for towing assistance on Lake St. Clair. At least four boats were aground, and others were experiencing engine problems after striking submerged objects. Captain William Leslie of TowBoatUS Lake St. Clair headed out for Muscamoot Bay, a shallow part of the lake he knows all too well. But this was not his normal dispatch. He would spend the next six hours freeing boats, some of them multiple times.

Situated between the Detroit and St. Clair Rivers, Lake St. Clair links Lake Huron and the upper Great Lakes to Lake Erie and the lower Great Lakes. Muscamoot Bay lies on the north side of the 22-mile-wide lake alongside the St. Clair River's Middle Channel, and for Detroiters and others with boats on Lake St. Clair, "the Moot" is the place to see and be seen. On hot, sunny weekends in the summer, hundreds of powerboats raft up in two parallel lines, and their crews wade, dance, drink, and party in the shallow waters in between. More than 1,500 boats have participated in the annual Muscamoot Bay Raft Off held in August every year, often described as Mardi Gras on the water. With charted depths of between three and six feet, the Bay doesn't have much water at the best of times. But due to a warm winter and the extended drought in the Midwest last summer, the lake had even less than usual. On that August night, the wind went from blowing water into the bay to blowing it out, lowering the depth still farther. In less than an hour, boats that had been floating weren't any more.

"It was as if they were caught in a spiderweb," Captain Will said. "I'd free them, they'd go a couple of boat lengths, and then they'd be aground again." That night on Lake St. Clair was just one example of a wider problem that has become increasingly evident in the BoatUS claims files: A lot of inland lakes are at or near historically low water levels, which means a lot of boats are finding the bottom in places where they never have before.

Tip: For the Great Lakes, check out NOAA's Interactive Great Lakes Water Level Dashboard and the Army Corps of Engineers Great Lakes Weekly Water Level Update. For other inland lakes, search by the name of the lake and "water level" online.

Where Has All The Water Gone?

The variation in water level on any inland lake over time is determined by simple addition and subtraction. Water enters the lake as precipitation, runoff from surrounding land, and inflow from other bodies of water. It leaves the lake as evaporation, in outflow to other bodies of water, or as diversions to supply water for drinking, irrigation, or other uses. The difference between what comes in and what goes out determines the current water level and how high or low it is relative to normal. Over the past few years, almost all of the factors in this equation have led to lower water levels on most inland lakes across the country.

Lake St. Clair, home to the Muscamoot Bay Raft Off, is at near historic low water levels.

On the inflow side, the first and most important ingredient is precipitation — rain, snow, sleet, hail — and there has been precious little of that in many parts of the country for more than two years. Both winter and summer precipitation levels were far below average for all of 2012. Last summer, according to the July 19, 2012 edition of the U.S. Drought Monitor, more than two-thirds of the lower 48 states were experiencing moderate to exceptional drought conditions, a record high for the 12-year history of Drought Monitor data. In Texas and other hard-hit areas, the drought has continued into 2013. Though this dry spell has not lasted as long as other major droughts such as the Dust Bowl in the 1930s, it is still ranked by the National Climatic Data Center as one of the top 10 most severe droughts in U.S. history in terms of extent and intensity. The lack of precipitation reduces inflow into any lake across the board because it also decreases runoff and inflow from other bodies of water.

On the outflow side, evaporation has also taken its toll on water levels across the country. Six of the warmest years on record occurred in the past decade. That heat lowers lake levels not only in the summer, but also in the winter by reducing or eliminating ice cover that would otherwise inhibit evaporation. According to NOAA, Lake Michigan had the second least ice cover on record during the 2011-2012 winter; only 2002 had less. This last winter, the first freeze of shallow bays on Lake Michigan didn't occur until January 23, far later than average.

All of that adds up to below-normal water levels in most lakes across the country. But Michigan-Huron water levels (the two lakes are actually one because they're connected at the Straits of Mackinaw) have also been impacted by an increasing outflow due to dredging in the St. Clair River over the past few decades. That dredging removed some harder rock that acted as a natural underwater dam and has led to extensive erosion of the channel, greatly increasing the outflow from the upper Great Lakes to the lower. Lake Michigan-Huron's water levels have been below average for 14 consecutive years, and below low-water datum continuously since September of last year. In February of this year, according to the Army Corps of Engineers, the lake reached its lowest level since recordkeeping began almost 100 years ago.

Which brings us back to that August night last summer on Lake St. Clair. When ongoing drought, lack of snow melt, and winter evaporation all combine to keep pushing lake levels lower and lower, boats find the ground even when their owners don't expect them to. When you only have a few inches below your keel, a windshift can be enough to leave you high and dry, and a log or rock you never found before can take out your lower unit.

An informal survey of TowBoatUS operators last summer revealed that dispatches due to groundings and striking submerged objects were up from 50 to 100 percent on most inland lakes. Insurance claims for groundings and related damage were up more than 50 percent on the Great Lakes.

It's difficult to say where lake levels will go in the second half of this boating season. A colder winter brought ice cover to many northern lakes, and enough snow pack to raise lake levels a foot or more in the Great Lakes this spring. But one normal season cannot make up for years of drought, and the Army Corps of Engineers is predicting low water levels by historical standards on most lakes through the end of the year.

Avoiding The High And Dry

Knowing the water level on your lake is lower than normal, and really understanding what that means are two different things. A BoatUS insured and experienced boater who keeps her boat on Lake Champlain said that her marina was hauling boats because they were aground in their slips. A few sentences later, she said that a nearby buoy must have moved because she touched bottom even though she had passed it on the same side and at the same distance as normal. So what can you do when low water levels render both local knowledge and charts irrelevant?

1. Know where your lake stands versus chart datum.

It helps to know whether your charts — or chartplotter — are accurate or if you need to subtract a couple of feet from the charted depths just to be sure. You can get information on lake levels for most inland lakes online.

If you know your lake level is low, make sure to give hazards — whether buoys, docks, points, shoals, or navigational marks — a generous amount of extra room.

Whether you're trailering a boat to a lake you don't know well, renting a boat on an unfamiliar lake, or borrowing a boat while visiting a friend, make sure to ask where lake levels are compared to normal and what dangers you need to be aware of.

If you do hit something, your boat and crew will be far better off if you're going slowly. When lake levels are low, it pays to keep the throttle well back unless you're absolutely sure you're in deep water with no dangers.

Whether you're towing skiers, wakeboarders, or tubers, stay in the deepest parts of the lake, well away from buoys, shoals, and the shoreline. A skier on a tow line can get a long way off your course, so be sure to give them plenty of room on either side of the boat.

If you anchor out, don't dive off the boat until you've gotten in the water to see how deep it really is. In shoaling water near shore, the depth at one end of the boat may be quite different than at the other, so your depth sounder cannot be relied upon.

7. Add some eyes down below.

If your lake has a lot of stumps or rocks, consider adding a fishfinder or depth sounder. Comparing the depth readings to a chart will help you determine exactly how low the lake is. A fishfinder can give you a look ahead, helping you spot dangers before you reach them. Some models can be installed in fiberglass boats without putting a hole through the hull.

Beth Leonard is the formal technical editor of BoatUS Magazine.